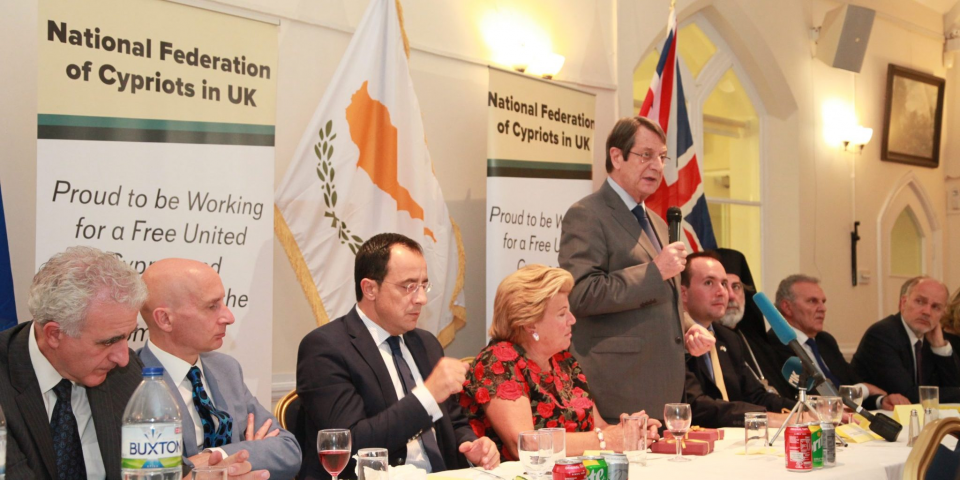 President Nicos Anastasiades addresses the Federation of Cypriots in the UK

“Brexit has brought about a huge awakening of the Diaspora in the UK,” Christos Karaolis, who has been President of the National Federation of Cypriots in the UK since 2015, told the Cyprus Mail in an interview.

In September, the Federation, along with Member Associations,   established the UK Cypriot Professionals Network to provide mentoring, CV reviews, networking opportunities and other helpful resources, for Cypriot professionals in the UK, of levels and across multiple industries.

For this group which includes many businesspeople, entrepreneurs and professionals, there has been a very dynamic change, Karaolis insists. “What we’ve seen is a very noticeable increase in participation in our activities from Cypriots born in the UK. For example, when we do e-campaigns about Cyprus, thousands of people email their MPs and a lot of those are second and third generation Cypriots. And we’re seeing this incredible engagement from the diaspora across the UK, with our last e-campaign reaching 60 per cent of MPs” he notes.

“We are seeing the same trend on our social media activities – we have a lot of engagement from second and third generation. Brexit seems to have awakened the idea, or made it more present, for our diaspora that they do have roots outside the UK.”

Karaolis admits that some of that awakened interest is attributable to the diaspora simply seeking their EU passport. “But it definitely goes beyond that, to a real rebirth amongst the diaspora of a sense of pride and passion for their Cypriot roots and heritage,” he says.

Building that sense of pride and passion among second and third generation diaspora has been a major focus for Karaolis. “My grandparents always talked to me about growing up in Cyprus, what life there was like, and what they lost due to the invasion,” Karaolis continues. Seeing my grandparents unable to go back to the towns and villages where they were born, struck a chord in me from a very young age.”

But how can the Federation keep the second and third generation of the Diaspora, who have not grown up with these influences, close to their roots?

“When I was President of NEPOMAK, (World Organisation of Young Overseas Cypriots), we managed to engage many young Cypriots, who had little connection with their homeland. These youngsters participated in our programmes, sometimes including travel back to Cyprus, sometimes simply learning more through our community in the countries in which they lived.”

“And it was amazing, you could just see a flame ignite, and they began building their connection with Cyprus. “I sincerely believe that our mission is changing and enriching lives” he adds.

The 36-year old Karaolis, himself a third-generation Cypriot, has been a driving force in diaspora activities in the UK and globally since the age of 17.

“I was born in UK, my father came over to the UK in the late 60s as part of the first Cyprus Educational Mission, establishing Greek language schools for the community. After the invasion, my father lost his land and orange groves in Morphou, and could not go back home, so he stayed in the UK and continued his passion for Education and his involvement in the community as the long-serving Executive Secretary of the National Federation of Cypriots in the UK.”

His mother’s parents, originally from Rizokarpasso and Sysklipos, came over in the 1930s, and set up a café in the East End of London. His mother was born in the UK and is a retired Headteacher of a state Secondary School. She currently serves at the Chair of Governors at St Andrew the Apostle Greek Orthodox School, the only Greek Orthodox faith secondary school in the UK.

Karaolis went to mainstream British Primary and Second state schools, but also to a Community Greek language School every Wednesday and Saturday. He went on to study Law at Oxford and is now a Partner at Global Management Consultancy firm, Bain & Company.

A trip to Cyprus for a conference at 17 first ignited his passion for community work, and at 18, he was among the founders of NEPOMAK. He was elected President of NEPOMAK at the age of 22, a post he held for 8 years. Currently, NEPOMAK has a global membership of more than 15,000 Cypriots.

“It’s important to understand that the Diaspora is changing,” he explains. “The first generation of Cypriots in the UK were economic migrants and refugees and they worked tirelessly with limited resources, mainly in the secondary sector, to educate their children. Today, those efforts have paid off, and our community is largely made up of professionals, top business people – a very highly educated and skilled group.”

To engage and represent this changing the diaspora, the Federation has also evolved under his leadership. A few years ago, the constitution was amended, so that at least 25 per cent of the Secretariat had to be under 38-years-old.

“Today, it’s closer to 30 per cent,” Karaolis notes, “and this change has made the Federation far more creative and dynamic, giving us the kind of drive to reach and represent the Diaspora in its new form.” Karaolis also noted how the organised infrastructure of the community is also changing saying “we now have new associations forming, and joining the Federation, that are focused on professional groupings e.g. Medics, City professionals, and this is definitely very welcome”

Speaking about the future of Cyprus, Karaolis was optimistic about the island’s potential, given its geo-strategic location and said reunification would only enhance this by “unlocking significant economic benefits.”

However, he did say that Cyprus should look to be more focussed. “We would like to see Cyprus define a clear vision of what it will be known for, and equally what it won’t be known for,” he concludes. “Cyprus should have specific branding, like Israel, which is branded as the ‘startup nation.’ Israel is a regional hub for start-ups, and it has built the infrastructure and the talent around this. What’s the equivalent for Cyprus? Is it maritime? Is it financial services? Is it education? Cyprus needs to decide and build the infrastructure and the talent pool around a central idea like this?”