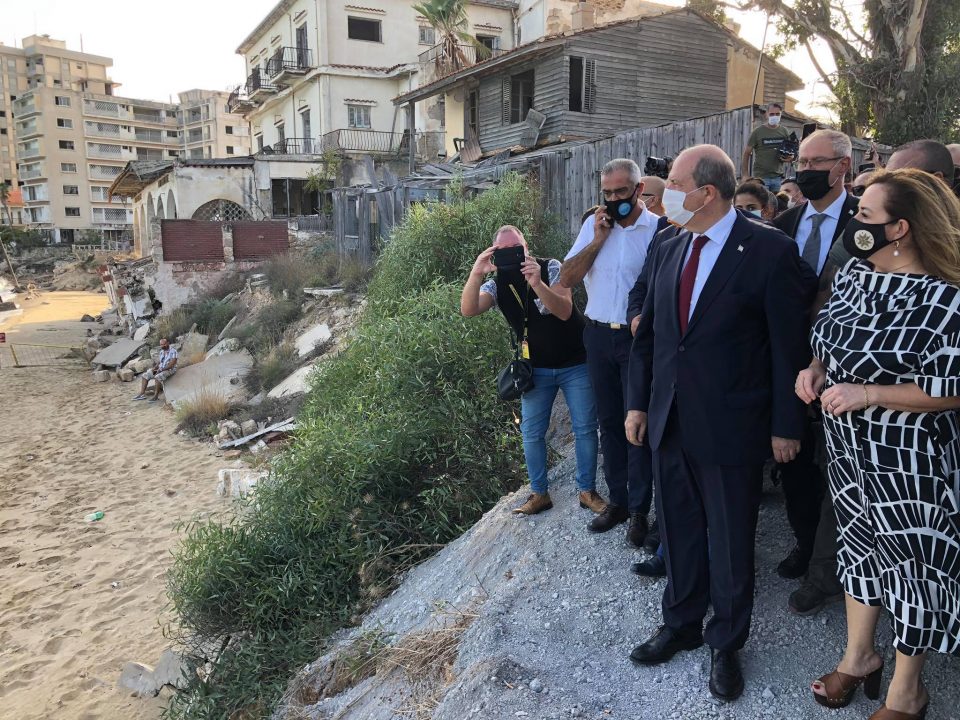 There is no doubt that several overlapping reasons lie behind this week’s joint decision by Turkey’s President Recep Tayyip Erdogan and the north’s ‘prime minister’ Ersin Tatar on the opening of the Varosha beachfront to the public.

One element was, of course, Sunday’s election for the Turkish Cypriot leadership which Erdogan wants Tatar to win.

But according to Ahmet Sozen, international relations professor at Famagusta’s East Mediterranean University, many other elements are also at play.

Just look at the numbers of Varosha property cases filed at the north’s Immovable Property Commission (IPC), he advises.

Greek Cypriots, including those with properties in Varosha, have applied to the IPC over the years to have their claims resolved. Not one successful outcome involved a claim about Varosha.

“The area is under Turkish military rule and therefore not under IPC jurisdiction.”

Ergo, since the IPC cannot be considered an effective local remedy for Varosha cases, such cases must end up with the ECHR and the Strasbourg court is currently dealing with a pilot case about a Varosha building.

The outcome, Sozen believes, being unlikely to favour Turkey, will open the way for other cases to follow.

In the circumstances, other than a comprehensive settlement of the Cyprob, Turkey’s only approach. is to switch Varosha’s status from military to civilian and place it within the IPC’s jurisdiction. None of the foregoing was mentioned this week, Sozen observes, “but I think it is exactly what is going to happen.”

Further reasons the academic cites for the Varosha beach opening and its timing relate to growing tensions in the East Mediterranean, the Greek Cypriot demands that the EU  take a tougher stance against Ankara, plus the forthcoming, informal five-party meeting planned by UN Secretary-General Antonio Guterres for soon after the north’s leadership election.

“There is also as a specific message to Turkish Cypriots in connection with their own election. Turkey is signaling very clearly again which candidate Ankara would prefer to win….”

Asked whether the Varosha move could indeed help current ‘prime minister’ and leader of nationalist UBP party Ersin Tatar to win the election, Sozen says that while it may influence some voters to back him, he suspects it more likely to turn voters against him.

“Of course, in order to be able to measure the effect of this move we would need a poll and since the election is taking place right now, we don’t have such an opportunity. But my hunch is that more voters will see the Varosha move as a grave intervention into the affairs of the north by Erdogan and subsequently it will hurt Tatar.”

Prio Cyprus senior consultant Mete Hatay points out that that despite all the noise surrounding the Varosha move, in reality not too much happened. The opening of Varosha beachfront is being portrayed as something much bigger than it really is.

“It is just a way of showing-off. OK, they have opened a couple of streets but, if you look carefully at what they did, it is evident they didn’t want to create a bigger conflict. Erdogan was very clear when he said that what they were opening didn’t belong to anybody. They didn’t touch Greek Cypriot properties.

“It is more about showing local voters that Ankara supports Tatar and squeezing Nicos Anastasiades ahead of the five-party meeting because it is obvious that the people of Varosha will now put pressure on him as well,” Hatay said.

Hatay also notes how the current turn of events has links to the Varosha plan dreamt up by another Turkish Cypriot ‘presidential’ candidate, the ex-deputy ‘prime minister’ Kudret Ozersay, who has just quit the north’s ruling coalition.

“They hijacked Ozersay’s plan and used it for their own purposes. But what Ozersay wanted to do was much more linked to international law. He was going to have a dialogue with the UN. These guys also have a plan to open Varosha, but whether they will get a chance to execute this plan remains to be seen. First, Turkey will see who will win the presidency, and what will happen with the government and who will be in the next government. All this will influence the chances of this plan.”

Messi could be convinced to stay at Barca says Suarez

Have an artsy Halloween