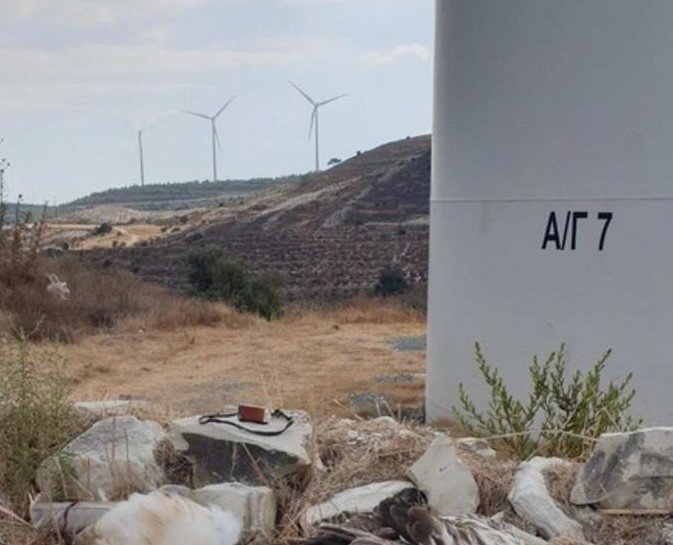 Part of the dead bird's body can be seen at the bottom of the picture (Photo: Game Fund)

A rare eagle which was found dead on Monday was most likely killed by a collision with a wind turbine, the Game Fund announced on Wednesday.

Officers of the Game Fund found the Bonelli’s eagle in an area with wind turbines near Kosi – Ayia Anna on Monday after a transmitter with which it was fitted kept sending a static signal.

The dismembered eagle is believed to have been hit by a wing of a nearby wind turbine.
This is the first Bonelli’s eagle which is thought to have been the victim of such an accident in Cyprus.

“Abroad, collisions with either high-voltage cables, wind turbines or electrocution are considered significant causes of death for large birds of prey,” the Game Fund announcement said.

The Game Fund routinely places transmitters in wild birds and systematically monitors the movements and behaviour of the animals.

One of the reasons this is done this is to record their cause of death.

Since 2019, 25 tracking devices have been fitted in Bonelli’s eagles, the only eagle species which breeds in Cyprus, as part of the EU funded LIFE Bonelli EastMed LIFE17 programme.

Of the 25 birds five have now died, one from the impact of the wind turbine, two from poisoning, one was shot in the north and one appears to have been attacked by another predator.

“The number of deaths from the aforementioned anthropogenic factors is much higher but due to the fact that the detection and recording of such events is very difficult, if the birds are not marked with a transmitter, many such events are unfortunately lost without being detected and recorded,” the Game Fund noted.

Bonelli’s eagle is a strictly protected and endangered species and the fine for killing one is €16,000.

The government has said owners of wind farms have been forced to take measures to reduce the impact of turbines on wild birds, such as making the area where the turbines are less attractive to birds, by installing equipment which gives off noises the birds dislike and unattractive lighting.

At the same time, the surrounding safe area has been made more attractive, by planting trees and placing boxes for them to nest in and providing food.

However, BirdLife Cyprus argues that the wind farms are often located in the wrong places, in or close to Natura 2000 areas which large birds frequent.