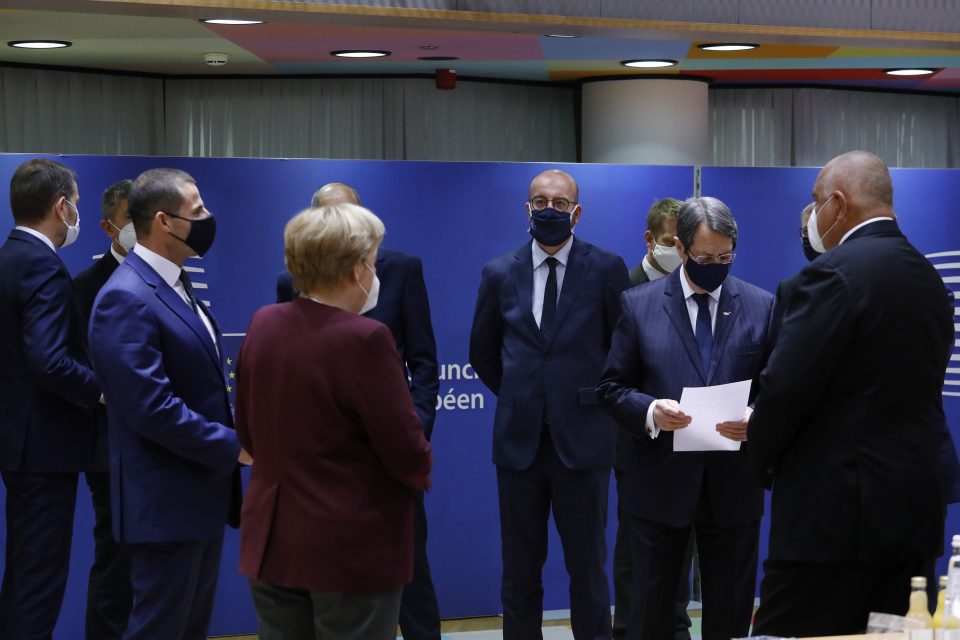 President Anastasiades participates in the deliberations of the European Council

President Nicos Anastasiades on Friday welcomed a European Council decision calling on Turkey to respect UN Security Council resolutions on the status of the fenced area of Varosha and to reverse its actions.

Government spokesman Kyriacos Kousios said after the completion of the European Council summit in Brussels that Anastasiades had the opportunity to brief his EU counterparts on Turkey’s latest illegal actions both in the fenced area of Varosha and the violations in the Republic of Cyprus’ exclusive economic zone (EEZ).

Last week, the Turkish Cypriot ‘government’ allowed access to visitors of a section of the fenced area.

The European Council reaffirmed its conclusions of October 1-2, 2020 and deplored renewed unilateral and provocative actions by Turkey in the Eastern Mediterranean, including recent exploratory activities.

It also urged respect for UN Security Council Resolutions 550 and 789 and underlined the importance of the status of Varosha. It also reiterated its full solidarity with Greece and Cyprus.

The European Council also urged Turkey to reverse these actions “and work for the easing of tensions in a consistent and sustained manner.”

It said it will remain seized of the matter in order to follow-up on its conclusions earlier in the month.

The EU leaders on Thursday discussed the epidemiological situation, relations with the UK, climate change while on Friday they focused on foreign affairs, in particular relations with Africa.

They are set to discuss economic sanctions on Turkey over its provocations in the eastern Mediterranean in December to give Ankara time change its ways. Germany, which has so far led diplomatic talks with Ankara, wants to give dialogue a chance because of close EU-Turkey trade ties.

“We plan a summit in December. And we have planned, indeed, to tackle again and to assess the situation in the eastern Mediterranean and in Turkey,” European Council President Charles Michel told a news conference after the summit.

French President Emmanuel Macron said that leaders had reaffirmed support for Greece and Cyprus, but were also open to talks with Ankara.

France and Germany said earlier this week that Turkey had only “weeks” to revise its stance and stop what they also said were provocations.

In addition to a Turkish exploration ship dispatched off a Greek island, Turkey has sent another vessel to Cyprus’ economic zone to conduct seismic surveys.

Though the eastern Mediterranean and relations with Turkey were not on the summit’s agenda, Mitsotakis said that he and Anastasiades had insisted on its inclusion.

He said they insisted and demanded a clear reference in the conclusions indicating the EU’s strong disapproval of Turkey’s unilateral actions. “The country leaders finally agreed to this,” Mitsotakis said.

Kousios said Anastasiades welcomed the fact that the Council “deplores Turkey’s new unilateral and provocative actions in the Eastern Mediterranean region and call for respect of UN Security Council Resolutions 550 and 789 in relation to the status of Varosha.”

The EU leaders had agreed during their meeting earlier in the month to launch a positive political EU-Turkey agenda with a specific emphasis on the modernisation of the Customs Union and trade facilitation, people to people contacts, high-level dialogues, continued cooperation on migration issues, in line with the 2016 EU-Turkey Statement. This however would be implemented provided Turkey made constructive efforts to stop illegal activities that affect Greece and Cyprus.

Coronavirus: education ministry stepping up measures to keep a lid on infections