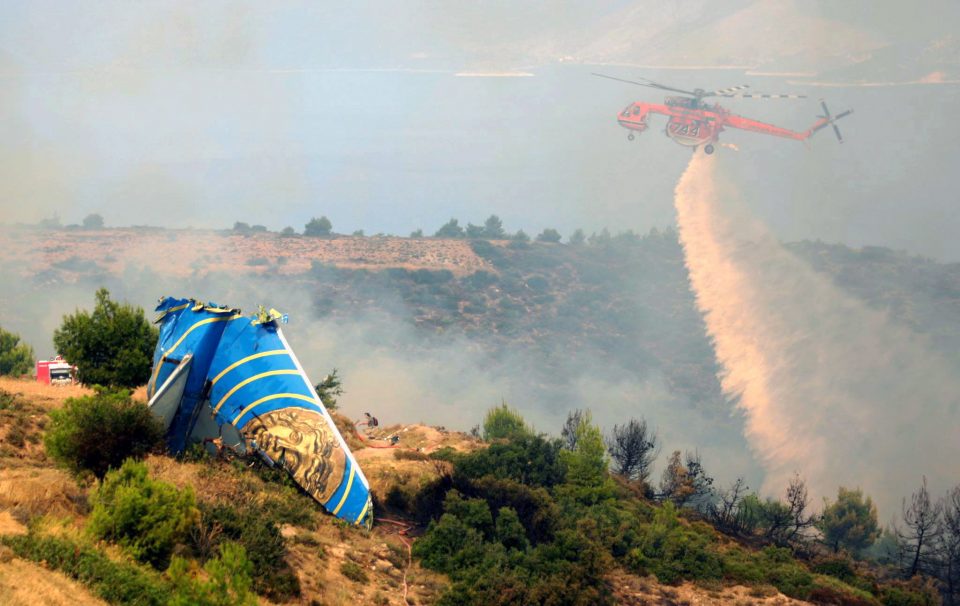 epa000503589 The tail fin of Helios airlines Boeing 737 is seen at the crash site near Athens, Sunday 14 August 2005. A Cypriot airliner carrying 121 people crashed north of Athens Sunday after the pilot reported technical problems moments before the plane was scheduled to land. EPA/ALEX BELTES

Reading the story I wrote some 15 years ago, still brings tears to my eyes as the memory is replayed in my mind. Just as it did when I was writing it. Out of the entire tragic setting however, it is the image of the co-pilot’s mother collapsing on the stairs that remains etched in my memory and will probably do so forever.

It was a hot August day in 2005 with half the island’s population on holiday and the rest preparing to follow suit.

I was at Eleon swimming pool with a friend as going to a busy beach on a Sunday was never my thing. My mum, who was home, called me and said they are saying that a Cypriot plane has gone missing over Greece. I asked which airline, but they weren’t saying at the time.

I called a pilot friend of mine who worked for Eurocypria but he didn’t respond. As time went by and with more information coming in, it became obvious that something bad had happened.

The Helios flight had crashed, killing all 121 people on board. Virtually everyone in Cyprus knew someone who was either killed or who had a family member on board.

At the time the newspaper was closed on Sundays, website and all. I drove home, put a pair of jeans on and drove to Larnaca airport. On the way, the publisher called saying we were going to run a special edition. I said I’m on my way to the airport, as were relatives of those on board.

I arrived and went straight to the cafeteria upstairs.

Some relatives were already there while more and more were arriving. Others were downstairs trying to find Helios company reps.

There was agony, crying, shouting, questions. They all wanted to know their loved ones’ fates but no one could tell them.

As time passed when it became clear that the plane had crashed, even without the company providing any passenger manifests, as a reporter I was at a loss how to approach this people. Ask them what exactly? Some were more composed and managed to tell us who was on the flight. Others reacted angrily, and rightly so.

I went downstairs to the check-in area several times. It was during one of them that I came face to face with the co-pilot’s mother. She was trying to find out if her son had been flying that day, but deep down she knew. She tried to hold on to the handrail, but she collapsed on the stairs crying, relatives trying to support her and lead her outside.

There were many scenes that day, but this is the one that appears every single time I think of the crash. The mother who lost a child.

Finance ministry warns against any more changes to foreclosure processes

Cyprus Mail 75 years: the torture of standing by and watching, and taking photos