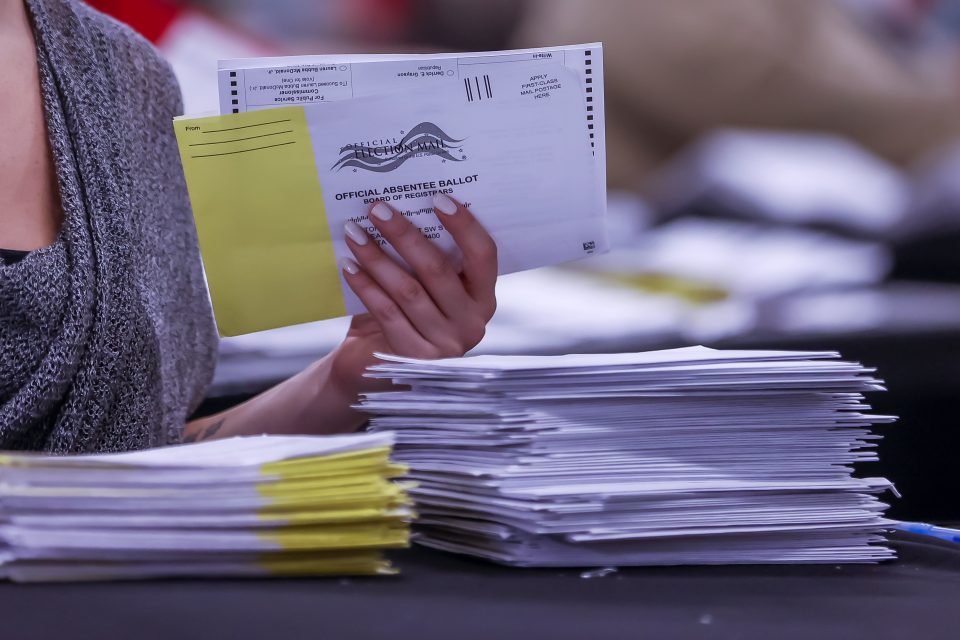 Ballots are processed in Atlanta Georgie

On election night last Tuesday US President Donald Trump claimed he had won the election and on Thursday night he gave a monologue press conference during which he read out a lot of gibberish basically saying that the postal votes being counted were fraudulent, illegal votes he called them.
Trump refuses to face the fact that when people are allowed to vote by post their votes need to be counted, and counting postal votes involves more cross checking and takes longer than counting crosses on normal ballot papers cast in person.

Nobody knows if there was fraud and its extent but to claim that all postal votes are tainted by fraud knowing that millions of people voted legitimately by post is unfair and undemocratic. People’s expectation that their vote will count that should not be frustrated on the whim of the president.
It is true that postal voting is more conducive to fraud than voting in person, and that you do not need evidence to prove it is more conducive because it inheres in the process: the greater the time lag between a vote and its tally the more the likelihood of tampering with its content – some things require evidence but others can be shown to be true analytically.

Trump would be on stronger ground if he refined his argument instead of claiming the election was stolen from him; given postal voting is less secure there is all the more reason for giving tellers sufficient time to check and make sure that no fraudulent votes are counted.

Trump knew that most of his supporters would vote on the day because he told them to do so, although he voted early himself. By contrast Joe Biden encouraged his supporters to vote by post. As always, you reap what you sow.

Trump is crying foul now because he knows that most of the votes being counted are for Joe Biden but, as the Americans say, that’s the way the cookie crumbles.
However, the question still remains: how constitutionally sound is postal voting of the magnitude that took place in this election?

It looks likely that Joe Biden is going to reach the magical 270 votes in the Electoral College and become president elect. And it is equally likely that Trump will challenge the election result in its entirety.
The issue ripe for decision by the Supreme Court is whether it is in accordance with the constitution for candidates for president to have been voted for by post in the unprecedented numbers they did in this election – nearly a hundred million, which is more than half of the voting population.

A more nuanced version of Trump’s claim is not that there was fraud, but that postal voting of the magnitude of a hundred million can distort the democratic legitimacy of the electoral process because of the risk per se of fraud is unacceptably high.

Stripped of all inessentials, what was unique about this election was that an unprecedented pandemic forced a huge proportion of the population to vote by post, which is okay on the margins to enable the elderly, the disabled and the absent to exercise their right to vote. But not when the number of postal votes is so great and the risk of fraud so high the outcome is perceived by the loser as compromised.

Trump’s ungracious kicking and screaming to stay in office should not detract from the fact that there is a genuine issue of huge political and legal importance here about the constitutional propriety of an election in which the electorate voted by post in such large numbers not envisaged in the US Constitution.
Voting by post is available in most democratic countries to cater for exceptional cases, but it is unusual in liberal democracies for people to vote by post in their millions. Election day is not just the day people cast their ballot, it is also a day of celebration of democracy – which it would cease to be if it were just a deadline by which you got in your vote.

President Trump believes widespread postal voting is conducive to fraud and therefore undemocratic. He has been challenged to provide evidence of fraud and has not been able to do so, but as I say above not every proposition lends itself to proof by evidence.

The argument is whether people “vote for” a candidate for president if they do so by post in such huge numbers that the risk of fraud undermines the democratic legitimacy of the outcome.
This has little to do with whether fraud actually takes place, but rather the perception that the process of election lends itself to a fraudulent and therefore undemocratic outcome.

Democracy is so impossibly difficult at times. Winston Churchill once said that democracy is the worst form of government except for all the rest, which was echoed by Joe Biden in this election when he said just yesterday that the democratic process is a messy business.

Churchill also said that the best argument against democracy is a five-minute conversation with the average voter. But the average voter is not a conversation companion. He is a voter and his preferred choice of leader from a panel of candidates presented to him or her in an election is what matters, and so long as people feel they have exercised their right to vote they are content to be governed democratically afterwards. They would, however, be very unhappy if their vote were not counted and very angry if fraudulent votes were counted.

That is the conundrum the US Supreme Court would face if it had to decide whether a presidential election result in which one hundred million votes were cast by post was in accordance with the US constitution, and whether to declare it null and void and of no effect.

Unfortunately, there is no precedent for such a case for the Supreme Court to follow since people have never voted by post in such huge numbers previously.
.
Alper Ali Riza is a queen’s counsel in the UK and a retired part time judge