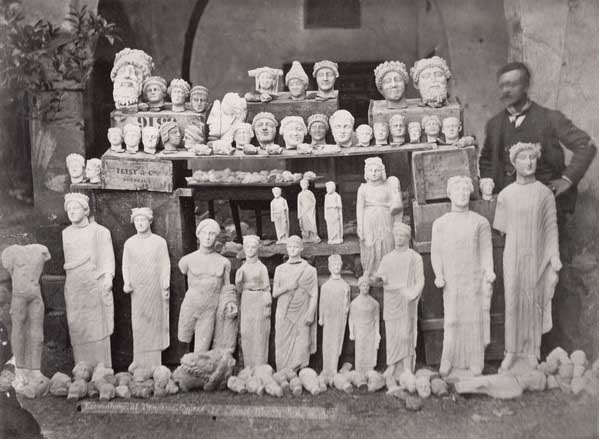 Finds from the excavations of Max Ohnefalsch-Richter, 1885

Archaeologists excavating near ancient Tamassos have located one of the most important sanctuaries discovered in Cyprus to date, more than 100 years after its exact position was forgotten, the department of antiquities said on Wednesday

The Sanctuary of Apollo at Frangkissa, with its wealth of sculptures, was subject to a rescue operation in 1885 by the German archaeologist Max Ohnefalsch-Richter. Most of the finds were taken to museums abroad although some, including the famous Colossus of Tamassos, are in the Cyprus Museum in Nicosia.

The sanctuary’s location was subsequently forgotten and sought in vain through the years.

Fittingly, archaeologists linked to two German universities have now rediscovered the sanctuary. Teams working under the direction of Dr. Matthias Recke (University of Frankfurt) and field Director Dr. Philipp Kobusch (University of Kiel) carried out archaeological and geophysical surveys after recent, archival studies succeeded in restricting the location of the sanctuary to a distinct valley south of Pera Oreinis.

Through an intensive survey of this valley, it has now been possible to locate the exact place of the sanctuary with certainty, the department of antiquities said,

The survey revealed a high concentration of sherds, but also fragments of ancient sculptures and terracotta figurines in a relatively narrowly defined area.

A geophysical survey by GPR (Ground Penetrating Radar) carried out in cooperation with the University of Cyprus under the direction of Apostolos Sarris confirmed these findings. According to the survey, deep structures in the ground can only be found in the part of the valley that was also prominent in the archaeological survey.

A preliminary analysis of the finds showed that the area had been occupied since the Iron Age and was used throughout the Archaic, Classical and Hellenistic periods.

The numerically smaller finds from the Roman and Byzantine era are considerably more eroded and probably originate from a settlement further downstream, which is already known.

The finds from earlier periods, however, which can be ascribed to the use of the sanctuary of Apollo, are relatively well-preserved. They probably originate from the debris of the 1885 excavations and were overlooked at that time.

In particular, the numerous fragments of limestone figures and large-size terracotta statues prove that these are the remains of an ancient sanctuary, as corresponding finds in settlements and necropoleis are uncommon.

In fact, the types of figurative finds correspond exactly to the material excavated in 1885 which is now in museums in Canada, Great Britain, Ireland and possibly even Russia.

Only a small part of the finds from 1885 have remained in Cyprus and are now in the Cyprus Museum.

The characteristic finds are small chariots, riders and warrior figures in terracotta and large hollow terracotta statues of up to life size depicting the donators. Many draped figures of votaries were also made of limestone. Besides these human figures, many fragments especially of horses (or riders on horses) have been found.

Confirmation that the site of the important sanctuary of Apollo has been identified in this area was also provided by the location of an almost 15-metre long trial trench, which can be traced back to the activities of 1885 and which is also mentioned in the old excavation reports, the department added.

The trench, which was exactly two feet wide, had the purpose of exploring the adjacent area in order to determine the exact extent of the sanctuary. In fact, remains of ancient double-shell masonry can be seen here, which must have been part of the architecture of the sanctuary.

A detailed investigation of the area as part of an archaeological excavation is planned for spring 2021.

Push goes on for budget consensus