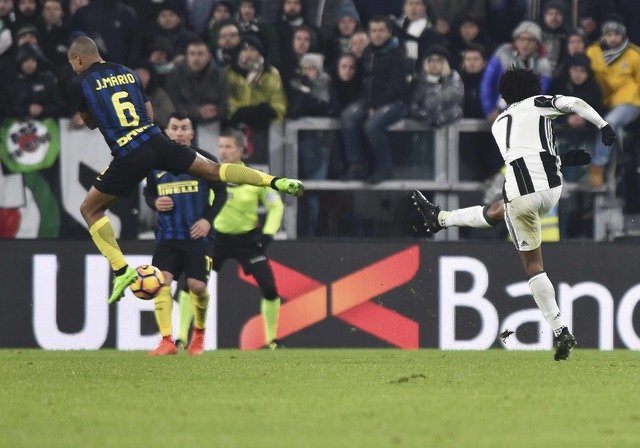 A spectacular piledriver from Juan Cuadrado gave Serie A leaders Juventus a 1-0 win over Inter Milan, ending a run of seven successive Serie A wins for their opponents in a pulsating end-to-end match on Sunday.

Marco Parolo scored four goals in Lazio’s emphatic 6-2 win at basement side Pescara while AC Milan’s season continued to nosedive as they were booed off the San Siro pitch after a 1-0 home defeat against Sampdoria.

Juve’s 28th successive home league win left them on 54 points, six clear of Napoli who thumped Bologna 7-1 away in the weekend’s opening game on Saturday.

Chasing a sixth successive title, Juve also have a game in hand on their pursuers.

Lazio’s win took them into fourth place with 43 points, four behind third-placed AS Roma who host Fiorentina on Tuesday, and one ahead of Inter Milan and Atalanta.

Juventus and Inter served up an enthralling first half in Turin with Paulo Dybala and Miralem Pjanic both hitting the crossbar for the hosts, who also found goalkeeper Samir Handanovic in inspired form.

Inter also had their chances but Juve went ahead two minutes before halftime when a corner was cleared to the edge of the area where Cuadrado met the loose ball in his stride and fired a magnificent rising shot into the net.

Handanovic continued to deny Inter in the second half with saves from Pjanic and Mario Mandzukic while substitute Eder wasted Inter’s best hope of an equaliser when, with two players free, he failed to pass the ball and ran into a crowd of defenders.

The game ended in heated arguments after Inter’s last attack resulted in a free kick being awarded to Juventus and Inter forward Ivan Perisic being sent off.

“I’m very happy, it was a really top-level match, played at the standard of a Champions League semi-final, and we have to praise Inter for that as well,” said Juventus coach Massimiliano Allegri.

“There were times when we weren’t very organised and got caught on the break, but we created several chances before our goal.”

Two Parolo headers in the first 15 minutes gave Lazio a flying start at Pescara but the Dolphins hit back through Ahmad Benali and Gaston Brugman before halftime.

In between, Gianluca Caprari saw a weak penalty saved by Federico Marchetti, Pescara’s fifth miss from the spot in seven attempts this season.

Parolo put Lazio back in front with another header straight after the re-start and completed the scoring with a volley, while Keita Balde and Ciro Immobile were also on target in between.

Milan, who are now in eighth place and struggling to qualify for Europe, saw their wretched day completed when Jose Sosa was booked twice in five minutes and sent off.

Andrea Belotti volleyed ninth-placed Torino in front at Empoli with his 15th goal of the season but the home side levelled in extraordinary fashion when Arlind Ajeti’s back pass got stuck in a puddle, allowing Manuel Pucciarelli to pounce on the loose ball, round Joe Hart and score.

Iago Falque became the third Torino player to miss a penalty this season when his effort was saved by Lukasz Skorupski in the 55th minute.

Alejandro Gomez scored two early goals, the second a superb curling effort, to give Atalanta a 2-0 win over Cagliari while Sassuolo won 1-0 at Genoa and Chievo and Udinese played out a goalless draw.