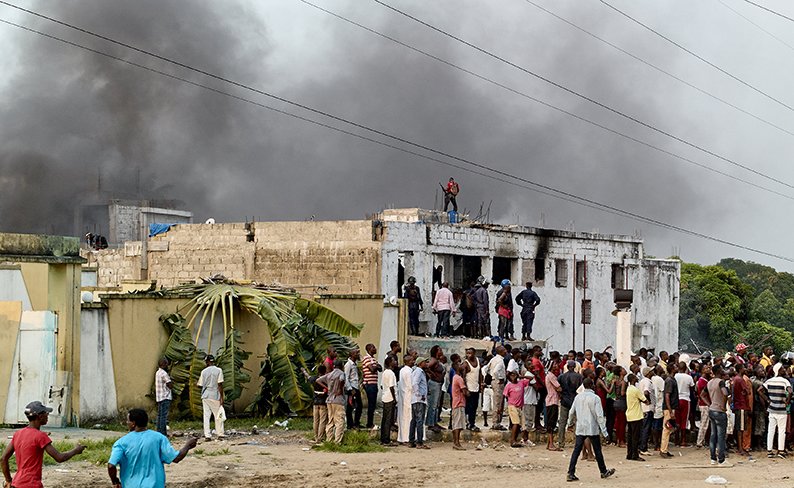 Civilians gather to witness a security operation near the residence of Ne Muanda Nsemi, a member of parliament and leader of Bundu dia Kongo (BDK), in the Democratic Republic of Congo's capital Kinshasa, March 3, 2017. Picture taken March 3, 2017. REUTERS/Robert Carrubba

GOVERNMENT forces have targeted civilians, including women and children, resulting in numerous deaths in central Congo this week and are restricting United Nations peacekeepers’ access to the area, the country’s U.N. mission said on Saturday.

Amid mounting accusations of violence against civilians, Congolese authorities on Saturday announced they had charged seven soldiers in connection with a video last month appearing to show army troops massacring suspected militia members.

Democratic Republic of Congo’s army is carrying out operations against the Kamuina Nsapu militia. Clashes between the military and the insurgents have killed hundreds of people and displaced hundreds of thousands since last August.

Militia violence in Congo, a tinder box of conflicts over land, ethnicity and minerals, has been worsened by President Joseph Kabila’s failure to step down when his elected mandate expired in December.

The U.N. mission, Monusco, said it had received “credible reports of high numbers of deaths” this week in Kananga, the capital of Kasai-Central province, adding that security forces have restricted the mission’s freedom of movement.

“I call for the immediate cessation of violence in Kananga and the Kasai region, and denounce the use of disproportionate force,” Monusco chief Maman Sidikou said in a statement.

“I further call for an investigation by the appropriate authorities into events in Kananga in recent days, and that those found responsible for any human rights violations be held fully accountable,” Sidikou added.

In an interview on Friday, government spokesman Lambert Mende denied that the army used excessive force and said local authorities could be blocking access to express frustration with what the government says is the mission’s condescending attitude.

The military’s top prosecutor, Major General Joseph Ponde, told reporters in the capital Kinshasa on Saturday that charges against the seven soldiers include the war crimes of murder, mutilation and cruel, inhuman and degrading punishment.

Ponde added that investigators plan to exhume two graves identified near the site of the alleged massacre in order to identify the victims, and have asked for Monusco’s assistance.

Two U.N. officials, one U.S. citizen and the other of Swedish nationality, were kidnapped by unknown assailants in Kasai-Central this week.