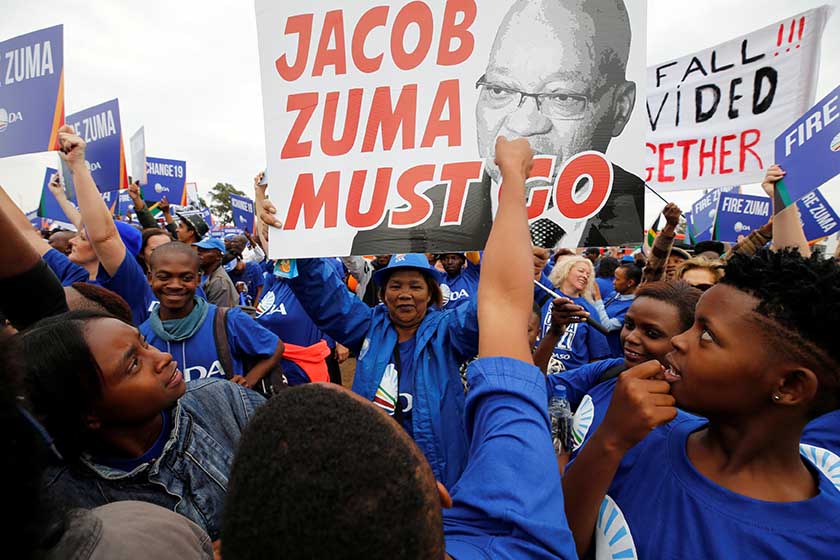 The African National Congress has ruled South Africa for 23 years, ever since the end of apartheid and the first free election in 1994. Twenty-three years is a very long time in politics, and you would expect it to be losing power some time around now. But it was a great and noble institution in its prime, and it would be a pity if its ending was merely squalid.

Nelson Mandela, the first ANC President of South Africa, was a secular saint admired world-wide. Mandela’s successor, Thabo Mbeki, was an honest and intelligent man, but also reclusive, completely lacking in empathy, and obsessive (he spent thousands of hours searching the internet for evidence that HIV did not cause Aids, and at least half a million South Africans died because his government did not make the standard drugs available).

And then, eight years ago, came President Jacob Zuma, a man who is neither honest nor intelligent, but who is wily enough politically to have survived the endless corruption scandals that litter his past. This time, however, he has done something that damages the whole country economically, and if the ANC cannot force Zuma to resign now then its political future is likely to be short and miserable.

Ironically, it’s not clear whether Zuma’s motives in this latest initiative are entirely corrupt. He has feathered his own nest and those of his cronies and allies quite adequately over the past eight years without getting rid of the incorruptible finance minister, Pravin Gordhan. Why dismiss him now, only two years before Zuma must retire at the end of his second term?

Maybe Zuma is just doing a final big favour for his friends – but maybe he has been talked into this by smarter men who told him that if he just spent a lot more money (which isn’t there to spend), that he could finally raise the living standards of the multitudinous South African poor.

Zuma is an “old comrade”, after all: he spent years imprisoned on Robben Island with Nelson Mandela and the other ANC icons. Maybe some shreds of his old idealism remain, and it was his associates inside and outside the government who persuaded him that Gordhan was the only thing standing between South Africans and prosperity.

That’s how the rhetoric justifies it. Zuma talks about the need for a “radical socio-economic transformation” in South Africa, and the new finance minister, Malusi Gigaba, points out that “the ownership of wealth and assets remains concentrated in the hands of a small part of the population.” All true, of course, but these are not the people you would hire to fix it. And meanwhile, the resistance to Zuma’s move builds.

Pravin Gordhan was seen by foreign investors (and many South Africans) as the only guarantee that Zuma would not turn the country into a feeding trough for his associates. The finance minister held the purse-strings tight, blocking many of the government contracts that would have enriched them further. Now he is gone.

Deputy President Cyril Ramaphosa called the dismissal of Pravin “totally unacceptable” and condemned “greedy and corrupt people” in a broadside clearly aimed at Zuma. Gwede Mantashe, secretary-general of the ANC, said the list of new ministers which Zuma presented to the party leadership was compiled “elsewhere”. Even his old allies in the trade union movement have called on Zuma to step down.

The South African currency, the rand, lost five per cent of its value on the foreign exchanges, but far more serious was the fact that one of the big ratings agencies, Standard and Poor’s, downgraded South African bonds to “junk” status. If only one of the other two agencies follows suit, big international investors like pension funds will be obliged to dump their South African government debt, and the government will be unable to raise loans abroad.

The reactions against Zuma’s action are so intense that you would think he cannot just ignore them and carry on running the country into the ground. Unfortunately, he may be able to do just that, because real power within the ANC lies in the National Executive Committee, and he has devoted much attention to ensuring that most of the NEC’s members owe him for past favours received.

The odds on Zuma really being forced from office by this incident are less than even. If he gets two more years in office, now with a pliable finance minister who allows the looting of the state coffers to proceed unhindered and with wicked foreign investors to blame for the resulting havoc in the country, the ANC will be discredited beyond hope of resurrection.

What comes afterwards may be better and it may be worse, but the familiar ANC-ruled South Africa of the past quarter-century will be gone.