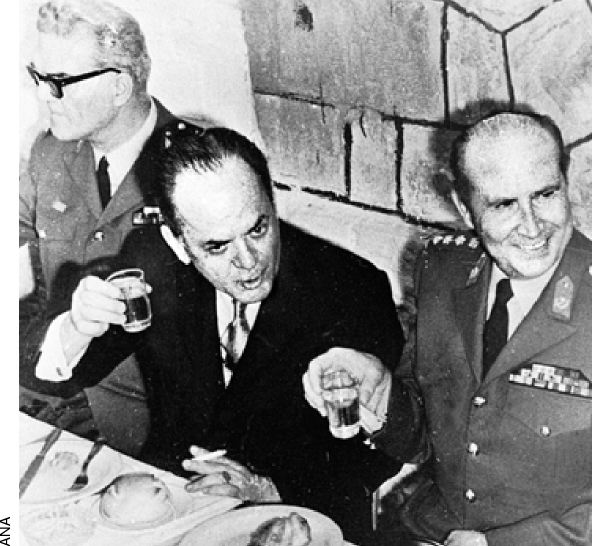 Fifty years after the military seized power in Greece, Cyprus should acknowledge its guilt

FIFTY years ago, on April 21, 1967, a group of army officers terminated democracy in Greece and imposed a brutal dictatorship, which collapsed like a tower of cards when Turkey invaded Cyprus seven years later.

The dictatorship did not emerge out of the blue. It had been preceded by a palace coup on July 15 (what a devilish coincidence) 1965. The then prime minister, George Papandreou, the leader of the Enosis Kentrou party, was in effect sacked by King Constantine when he decided to take over the ministry of defence, as was his constitutional right. In response, the king ordered the speaker of parliament, Georgios Athanasiades Nova, to form a government that was supported by some of the Enosis Kentrou MPs, who were labelled ‘apostates’.

King Constantine played a negative role which in the end cost him his throne. Assisted by his visible ‘apostates’ and his invisible protectors, he managed to wreck the already creaking government machinery and thus prepare the ground for the violent seizure of power by the junta.

The seven-year junta rule (1967-74), culminating in the vile Greek invasion of 15 July, which unfolded as people were going to work, was the darkest period in Cyprus’ recent history. The junta, buying consciences, inciting and funding criminals and many ‘nationalist’ clubs achieved two major objectives: the unleashing of the so-called supporters of Enosis and Eoka B on the one side and the brutalisation of public life on the other.

When Makarios, who bears huge responsibility for the junta’s domination of Cyprus, realised the deadly danger the country faced he attempted to get rid of the Greek officers running the National Guard, but it was too late. It was reminiscent of the old film Frankenstein where a scientist to protect himself from criminals creates the monster Frankenstein and brings him to life. Ironically, Frankenstein (in our case the National Guard) attacks and destroys his creator.

We are obliged, even after 50 years, to engage in some self-criticism because we and nobody else are to blame for allowing the junta to spread its tentacles across all social groups. The biggest share of the blame belongs to the political leadership. President Makarios failed to take a firm line. He exhibited everything from silent apathy to warm sympathy. In the first days of the dictatorship, he expressed his discomfort, but in August 1967 (100 days after the coup) he welcomed the dictator Georgios Papadopoulos to Cyprus with warmth and enthusiasm.

He also held a reception in Papadopoulos’ honour in the gardens of the presidential palace and invited all the political leaders (the only one who declined the invitation and did not attend the reception was Vassos Lyssarides). In short, Makarios failed to neutralise the junta’s influence as, according to his dogma, he was obliged to co-operate with the Greek government (even if it was run by a dictator), while the National Guard was under the complete control of the junta.

The personal and party self-interest of most Greek Cypriot deputies led to political blindness, while their ideology indicated they were the junta colonels’ brothers in arms. It suffices to mention that Tassos Papadopoulos, speaking on behalf of all the nationalist deputies that had the majority in the House, in 1971 criticised the Committee for Restoration of Democracy in Greece because its actions provoked the feelings of the Cypriot people!

To describe the political climate of the time as ‘paranoid’ would be putting it very mildly. The junta came to be identified with Greece, with the nation and with patriotism. The label of ‘nationalist’ would be converted into a passport for social standing and acceptance while the label ‘democrat’ or ‘social democrat’ made a person the target of persecution and disparagement. There was no end to the paranoia. Every March 25 we celebrated the liberation of Greece while every April 21, we celebrated with the same jubilation the enslavement of Greece.

Predictably, the junta also had the media under its thumb. While in the beginning all the newspapers condemned the April coup, it was not long before most of them made the U-turn. The explanation for this is self-evident. Meanwhile the only television station – Cybc – also became the champion of the ‘national government’ as it referred to the eventual executioners of Cyprus, without shame.

The most important castle taken over by the junta was that of education. The teaching unions Poed and Oelmek became subservient to the junta and through their announcements and other devious means cultivated among the young a love for the dictatorship and for servility, cultivating (perhaps unintentionally) the ground for accepting the forthcoming coup or, more precisely, the junta’s barbaric invasion. The leaderships of these unions dishonoured their noble mission perhaps because of financial interests or servility or cowardice or ‘patriotism’.

Unfortunately, events to mark the anniversary of the establishment of the 1967 dictatorship range from anaemic to non-existent. This could be attributed to the guilt complex of Cypriots. Whatever the reason, marking this black anniversary is imperative because it would contribute to historical self-knowledge and sensitise historical memory as an element of democratic coherence and awareness.

It’s time for Papadopoulos to reveal his ingenious new strategy