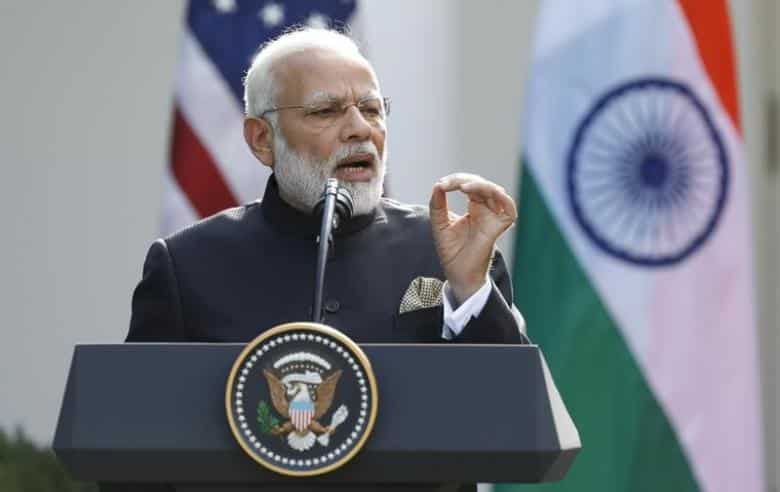 Indian Prime Minister Narendra Modi addresses a joint news conference with US President Trump in the Rose Garden of the White House in Washington, US, June 26, 2017

Narendra Modi begins a first visit to Israel by an Indian prime minister on Tuesday, in a public embrace of a country that he has long admired for its military and technical expertise but which his predecessors kept at arm’s length.

India has traditionally trodden a careful diplomatic line in the region, analysts say, wary of upsetting Arab states and Iran – upon whom it relies for its vast imports of oil – and its large Muslim minority. It has been a vocal supporter of the Palestinian cause, even as it quietly pursued ties with Israel.

But now Modi is lifting the curtain on a thriving military relationship. He will hold three days of talks with his Israeli counterpart, Benjamin Netanyahu, to advance sales and production of missiles, drones and radar systems under his signature ‘Make in India’ drive, officials in Delhi and Tel Aviv said.

Netanyahu, hailing what he described as Modi’s “historic visit”, said on Monday he and the Indian leader have worked together over the past few years to build a “steadfast friendship” between Israel and India.

“This visit will deepen cooperation in a wide range of fields – security, agriculture, water, energy – basically in almost every field Israel is involved in,” Netanyahu told his cabinet in public remarks.

Modi will not travel to Ramallah, the seat of the Palestinian Authority and a customary stop for visiting leaders trying to maintain a balance in political ties.

At home, the apparent shift in what has long been a bedrock of India’s foreign policy risks sharpening criticism that the country’s 180 million Muslims are increasingly being marginalised under Modi’s Hindu-nationalist Bharatiya Janata Party (BJP) government, which swept to power in 2014.

“Narendra Modi’s visit to Israel will only strengthen its occupation of Palestine,” said Asaduddin Owaisi, a member of India’s federal parliament from a regional group that promotes Muslim rights.

In previous decades, under the left-leaning Congress Party, former Palestinian leader Yasser Arafat was a regular visitor to New Delhi, pictured hugging then Indian Prime Minister Indira Gandhi when the two were championing the Non-Alignment Movement.

In May, Modi hosted Arafat’s successor, Palestinian President Mahmoud Abbas, and offered help in health and information technology, but the trip was low-key.

The scale of the ongoing collaboration with Israel dwarfs anything India is attempting with the Palestinians, officials say.

“We have a wide ranging partnership with Israel that ranges from agriculture cooperation to homeland security,” said Bala Bhaskar, head of the foreign ministry’s West Asia division.

He said India’s ties with Israel and Palestine were important in their own right and neither should viewed through the prism of the other. But an Israeli diplomat said Modi’s standalone trip to Israel was an important signal.

The two sides are expected to announce strategic partnerships in areas including water, agriculture and space technology during Modi’s visit.

But it is the defence relationship that is most advanced – India is now Israel’s biggest arms market, buying weapons at an average of $1bn each year.

The centrepiece of the collaboration is the Barack 8 air defence system, built jointly by the two countries in a boost for Modi’s campaign to develop a domestic defence industry.

“We are adjusting to the ‘Make in India’ policy which says only local companies will win tenders, so we are setting up three joint projects in India with local companies,” Alfassi said.

IAI has signed a memorandum of understanding to build missiles with India’s state-run Bharat Electronics Limited, launched a joint project with Dynamatic Technologies to make drones and is scouting for a partner for a joint venture for its subsidiary Elta, which specialises in electronic warfare and communication systems, he said.

India is in the midst of a military modernisation programme worth more than $100bn to help counter rivals Pakistan and China.

Israel, the United States and Russia are India’s top military suppliers, and Modi’s government has said it will favour countries that are ready to share technology.

Avi Mizrachi, executive vice president of business development for Israel and Southeast Asia at Elbit Systems , which supplies electro-optic systems and upgrades of helicopters and combat vehicles, said it would be bidding for a tender to supply drones in partnership with India’s Adani group.

The two countries stress, though, that there is more to the relationship than arms deals.

Modi will be discussing a plan for Israeli help in boosting India’s food security, officials said.

The plan is to expand 26 agriculture expertise centres that Israel has set up in 15 Indian states to help increase output of everything from vegetables to mangoes and pomegranates.

Modi wants Indian companies involved in turning these small centres into commercial entities that would help tens of thousands of farmers to boost productivity.

Many dead after bus collision in Germany (Update)