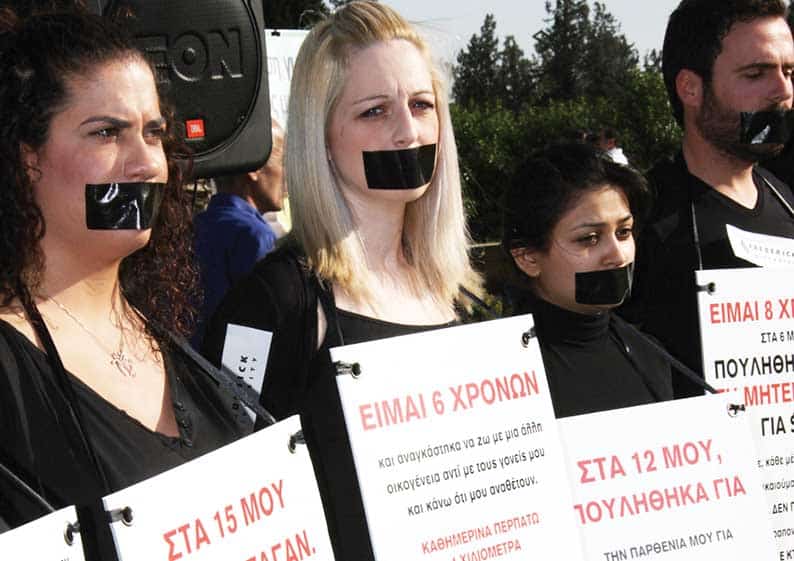 Cyprus’ efforts against human trafficking were not as successful in 2016 as they were in 2015, according to the latest US Department of State report but where government falls short, NGOs step in to help victims of sexual and labor trafficking.

It can take a long time for victims of trafficking to receive support from the social welfare service, during which they have no source of income, he said.

“The welfare services are supposed to help them but unfortunately, the process is very slow,” said Androulla Christophidou, the director of Cyprus Stop Trafficking. “While Minister of Labour Mrs. Zeta Emilianidou is always ready to meet with us and provide innovative solutions, the bureaucracy of the welfare system is very slow.”

When the victims leave reception centres for immigrant arrivals, they are faced with the challenge of finding affordable accommodation with almost no money.

“After their time in the centre, they receive very little money for a few days and then they must wait for months until they receive more from social welfare,” Christophidou said. “We give them money for rent and electricity so they can live in an apartment.”

The US State Department report states that while the Republic has invested more money in protecting trafficking victims, less people were identified and helped.

“The government identified 21 trafficking victims, compared to 40 in 2015. Of these, 10 women were subjected to sex trafficking, three men to forced labor, and seven women and one man to forced criminality,” the report said.

The real problem is systemic, according to Polykarpou. The report, which is based on statistics from government agencies, probably does not show the full extent of the government’s failure to identify trafficking victims.

“The Cypriot system concerning immigration is closer to the Middle East, like Lebanon, than to Europe, Polykarpou said. “This means that there is a very high dependency on the employers, who are the guarantors for immigrants. Because of this, the line between exploitation and trafficking is very thin and the system itself encourages trafficking.”

To measure the identification of victims based on treatment by the Welfare Services is misleading.

“The social welfare services do not help victims until they have been to the police, which is something they lied about to the Americans,” Polykarpou said. “The number of people that were helped, the statistics, are relative to this problem. Only trafficking victims who are found by NGOs will be brought to the police.”

The failure to work together with NGOs in a meaningful way was one of the reasons why the US State Department gave the Republic a lower rating.

“Three of the four NGOs in the [Multidisciplinary Coordinating Group] withdrew because NGOs were not given a substantive role and meetings were infrequent,” the report said.

The three NGOs that withdrew were the Mediterranean Institute of Gender Studies, Cyprus Stop Trafficking and STIGMA. The NGO that stayed was KISA. Polykarpou said that they understand why the others left.

“We were the last NGO that stayed in the group,” he said. “We understand why the other NGOs left but believed it was a better strategy to be there and point out the problems with the system.”

Over the past year there were only two meetings, during which the NGOs weren’t allowed much room to talk about the issues.

“Eighty per cent of the meeting consists of announcements and updates from the minister of interior,” Polykarpou said. “If you are lucky, you have twenty minutes, half an hour at the most, to discuss issues. The Multidisciplinary (Coordinating Group), to be honest, is a farce.”

Four hours per year are not enough to create a plan to tackle the issues with human trafficking.

“We told them that we need in-depth discussion, it’s not enough to meet for two hours two times per year,” Polykarpou said. “You have 20 representatives from all these institutions coming together for four hours per year to discuss trafficking in the whole country. But the minister said we don’t have time to do more.”

The last NGO in the group might decide to leave the group as well.

“We might also withdraw after this,” Polykarpou said. “We’ve had enough. We gave them the opportunity to show that they will make an effort to make the group function but it’s been so disappointing.”

Sexual trafficking victims mostly come from Eastern Europe and Africa. They are lured by traffickers with false promises.

“A lot of the sexual trafficking victims whom we received under our rehabilitation services were Cameroonian and Nigerian,” said Fatema Islam, a social worker at the Future Worlds Centre’s Humanitarian Affairs Unit who works with torture victims. “Many arrive through the north. They are smuggled into the country and promised to be brought to other EU countries.”

Rather than taking them to another country, the traffickers and smugglers force the victims to do illegal work.

“Some of our clients were forced into prostitution,” Islam said. “They are beaten, raped and held in confinement, usually until they escape.”

Many of the victims are bright young women who want to study.

“We have victims from Romania, Russia, Ukraine, and Africa,” Androulla Christophidou said. “Some of them are very intelligent girls and students who fell into the trap of traffickers.”

The traffickers make them work in cabarets, bars and restaurants. But usually these are fronts for illegal activities.

“One of the most brilliant girls I knew, she came here to work in a restaurant and now everyone from that place is in prison, which tells you something,” Christophidou said. “In the north, the situation is even worse.”

While many of the cabarets were shut down in the South, the problem has shifted to bars.

“When we started ten years ago, there were 108 cabarets and 6,000 girls came to Cyprus every year, Christophidou said. “Many of them have been abolished thanks to our efforts but a lot of trafficking happens in bars now.”

“It would be good if there would be more prosecution of traffickers and a more efficient and humane migration policy in place so people are not exposed to traffickers,” Fatema Islam said.

Polykarpou agrees also stresses that the system of migration needs to change.

“We need to be able to legalise the victims and protect them within the same system,” he said. “Prevention and changing the system is more important than prosecution.

Even the number of convictions recorded in 2016 might not tell the whole story. KISA is suing the government over a “symbolic conviction” that left labour trafficking victims without any compensation.

“We currently have a case pending where we are suing the court for failing to secure compensation for trafficking victims,” Polykarpou said. “The trafficker owed the victims €20,000 to €35,000 each in salaries and when the government sued him, the attorney-general agreed with him that the company for which he worked would take the blame. In the three years while the case was pending, the company went bankrupt.”

With the company bankrupt, nobody is being made to pay the labour trafficking victims for their work.

“We had a conviction of a bankrupt company and after waiting for three and a half years, the victims didn’t get anything,” Polykarpou said. “The victims go through this process because it’s a matter of survival, they need this money desperately because their families depend on it. It was a symbolic conviction without any consequences.”

The police press office had not taken  a final decision on whether to give permission to the Cyprus Mail to talk to the head of the Combating Trafficking Unit by the time of publication.