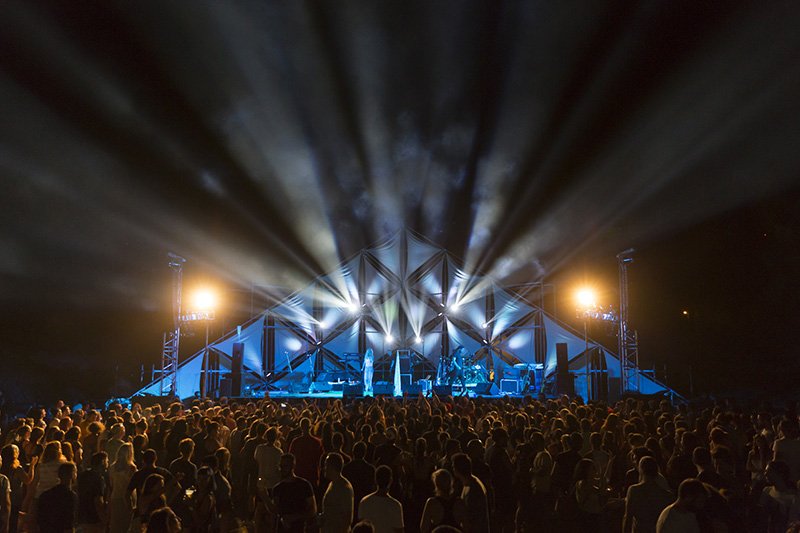 Set in one of the most beautiful areas of Cyprus, Kayo Drys is the epitome of a quiet Mediterranean village: quaint, sunlit and sleepy for most of the year. But every August, this somnolent little settlement becomes a hub of excitement, the destination for music lovers from all over the island. Crowds of people – of all ages and from all backgrounds – flock to the region in their droves, and for three days Kato Drys becomes the most happening hamlet on the island.

Now in its seventh year, the Fengaros Festival is synonymous with live music from artists the world over. Brought to us by Louvana Records, it’s an extravaganza of boundary-pushing creativity that’s gone from strength to strength over the past few years, bringing world-renowned artists (including Joss Stone, Electric Litany and Super Stereo) to Cyprus and to the stage.

Divided into two parts, the festival begins with a series of workshops and masterclasses before finishing with three days of fantastic performances. The first few days (known as Fengaros Music Village) see “ten music, storytelling and architecture workshops as well as an artists’ residency,” in which “artists from Cyprus, Greece, USA and England will instruct workshops, proposing alternative methods of learning and creating.” Percussion with Rodos Panayiotou, creative writing with Giorgos Kalogirou, composition, musical arrangement and transcription with Fotis Siotas, jazz music with Alexi David, and storytelling with Martina Katsari are among the workshops taking place from July 27 to August 1 under the auspices of the Music Village. And then it’s on to the Festival itself which, running from August 3 to 5, is “dedicated to its everlasting goal of presenting fresh and original live music from around the world…”

Three different stages (The Field Stage, the Village Stage and the Church Stage) are set to host more than 35 acts from Cyprus, Greece, Italy, Kuwait, Niger, Israel, Australia, England and the USA, in a line-up designed to showcase “the multi-dimensional, uncompromising and selective aesthetic of the organisation.”
The first day of Fengaros kicks off with a dynamic burst of psychedelic, progressive, indie and stoner rock, as well as a smattering of jazz. The Field Stage will host superb rock bands from Greece Villagers of Ioannina City, Acid Baby Jesus and Ηoly Monitor, while the Village Stage will host English indie-band Happyness, jazz-funk band Datfunk from Athens and the jazz group of composer / double-bassist Αlexi David from New York, among others. The night will close with the cinematic music of duo Sancho 003.

The festival’s second day celebrates “the beauty of cultural diversity and takes the audience on an exotic World Music journey.” The stages will host the unique duet of Xylouris White, mixing Cretan music with American rock and improvisation, the contemporary rembetiko band Pliri Ntaxi from Salonica and the groovy Balkan / gypsy band Baildsa – both guaranteed to get the crowds dancing to the beat. Also on the bill are Ouzo Bazooka from Tel-Aviv with their own particular version of Mediterranean rock, and the Sardinian artist Paolo Angeli with his “unique custom-made guitar”! But the highlight of the day, organisers reveal, will be “the world-famous Bombino from Niger, bringing the sounds of the Tuareg tribe from the deserts of Africa to the little village of Kato Drys.”

The final day of the festival sees a real diversity of acts taking to the stage: “Such extraordinary acts as the polyphonic choir of Marina Satti & Fonέs, folk singer Petros Malamas Trio and fusion band Jan Van from Greece, the delightfully unique singer-songwriter from Kuwait, Υousif Yaseen, as well as the much-loved Cypriot folk-band Monsieur Doumani will take to the stages for a multi-flavoured combination of performances.” But perhaps the most anticipated name of this year’s festival is headliner Fantastic Negrito from Oakland, California, who will be closing the Field Stage with his explosive live set, just months after winning a Grammy as Best Contemporary Blues Album of the Year. The audience will then head to the Village Stage for the finish line, where Greek-duo Κid Flicks and the Cypriot solo artist Spivak will end the live performances with electronic music, to be followed by a closing DJ set by the beloved Fengaros DJ Sofronis.

All in all, both audiences and the residents of Kato Drys are in a for a whale of a time in the coming days. And with parallel events (DJ sets, radio shows, live-links), bars, food stalls and camping available for the duration, this is one Festival – and one village – that’s set to be a real hub of harmonious happening this summer!

Fengaros Music Village and Fengaros 2017
From July 27 to August 5 in the village of kato Drys. For more information, a full programme of events, and advance bookings, call 70007610 or visit www.fengaros.com. Tickets cost €36 (3-day pre-sale ticket) and €20 (1-day pre-sale ticket)

More to the beach than just sunbathing