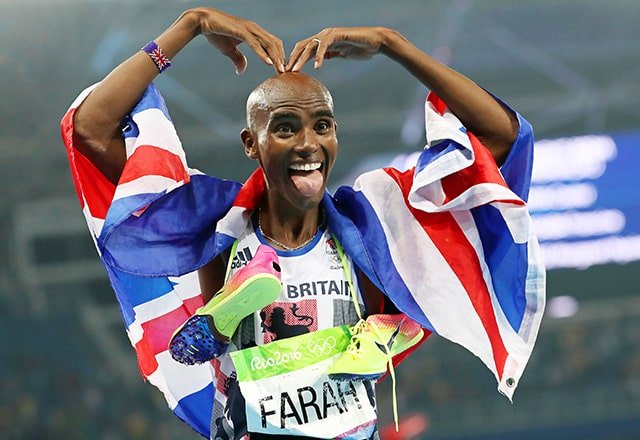 Distance king: Sir Mo Farah won the 5,000m and 10,000m double at both the London and Rio Olympics

Mo Farah will bring down the curtain on his championship career with a bid for yet another distance double in London but, despite his unmatchable palmares, the Briton still finds himself fighting for appreciation in some quarters.

Five years ago, when the same stadium produced that unprecedented rolling roar to help carry the home-town favourite to emotional Olympic victories over 10,000 and 5,000 metres, Farah was the golden hero.

Since then, he has successfully defended both titles at Rio, something only Lasse Viren had previously achieved, and kept his grip on the world championships.

He is seeking a third successive world double in London and a seventh world title, with his last global defeat coming in the 10,000m in Daegu in 2011. He also has five European titles to his name.

To put that in perspective, no Briton had previously won the 10,000 or 5,000m at the Olympics or world championships and no British track and field athlete managed more than two Olympic golds.

Yet, just as in the Tour de France, where the idea of a British victor was something of a joke for a century and now is so commonplace it’s expected, Farah’s accomplishments have somehow become so predictable that the blood doesn’t pump the same way.

Perhaps, like Monaco-based and Africa-raised Chris Froome, the Somalia-born and America-based Farah is just not considered British enough.

To some fans it doesn’t matter how often he grabs the microphone post-race to rave about loving London – where he lived after arriving at the age of eight – if he then jumps on the first plane out to return to his preferred training environment of Alberto Salazar’s much-criticised Oregon project.

Among athletics aficionados too, there are sometimes murmurs of doubt. Farah’s titles should brook no argument, but nagging whispers remain that he has somehow had it easy.

Critics say that he is lucky to be operating in a period when the best African talent has begun diverting to the lucrative marathon circuit at a younger age than previously and that his championship opposition is not in the class of previous champions such as Kenenisa Bekele.

Of course, Farah can only beat whoever lines up against him, even if they all too often play into his hands and allow him to dominate races. It is easy to shout from the sidelines that the best Kenyans and Ethiopians should try to run his finish out of him, but they just don’t have the quality to do it for long enough to make an impact. Farah has also developed into a tactically astute operator and is always ready to mark and react to any moves.

A world record at 5,000 or 10,000 would silence all the doubters but, at 34, that now looks an impossibility – unless something very unusual happens over the next two weeks.

Farah will race twice more after London, in Birmingham and Zurich, before switching full time to the marathon.

He deserves and will get great support in his championship farewell and will hope to get the feel-good factor going early when he goes over 10,000 on the opening night on Friday.

Whether or not he triumphs then, and again over the shorter distance eight days later, he will depart as undoubtedly Britain’s greatest track and field athlete and right in the mix for the title of the country’s greatest performer in any sport.

Grand jury issues subpoenas in connection with 2016 US election