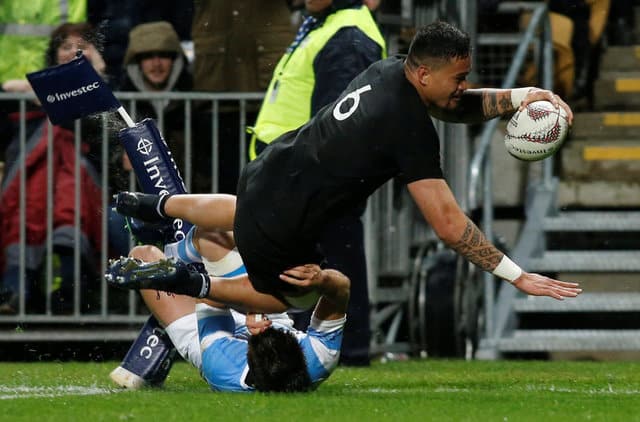 A sensational try by rookie flanker Vaea Fifita was the catalyst for the All Blacks to rally past Argentina for a 39-22 bonus-point victory in their Rugby Championship clash at Taranaki Regional Stadium on Saturday.

The lanky Fifita, making his first start in his second test, was put into space from 35-metres out and outsprinted the Argentina backline to get the 14-man All Blacks back into the game with 30 minutes remaining.

The try levelled the scores at 22-22 and halted the momentum of the Pumas, who until that point had looked like they could cause a major upset and secure their first victory over New Zealand in 25 attempts.

The All Blacks, who had Beauden Barrett in the sinbin for a professional foul when Fifita crossed, added two more tries through Damian McKenzie and Barrett to remain top of the standings heading into next week’s clash with the Springboks.

Until Fifita’s moment of brilliance, however, the world champions had been guilty of trying to force play and made an uncharacteristic number of errors in an untidy display.

“The Argentines really brought it to us,” All Blacks captain Kieran Read said.

“We certainly had to work for that. It was a tough test match. I’m really pleased with the way the boys stuck at it.”

The Pumas, who had suffered two heavy losses to South Africa, took a 16-15 lead into halftime after flyhalf Nicolas Sanchez scored a try when the All Blacks botched a defensive lineout under pressure.

Sanchez also added a penalty and a drop goal while Emiliano Boffelli slotted a monster three-pointer as the visitors played for territory and took their scoring opportunities.

All Blacks winger Nehe Milner-Skudder, back in the side after almost two years of injury woes, centre Leinert-Brown and winger Israel Dagg all scored first half tries for the home side, but Barrett missed all three conversions.

Boffelli added another penalty after 43 minutes and Barrett’s nightmare continued when he was sinbinned 10 minutes into the second half after the All Blacks had been penalised four times in quick succession.

Sanchez gave his side a 22-15 lead with about 30 minutes remaining but Fifita’s blistering pace then lifted the home side and they finally took the sort of control over the game that had been expected.

“The tempo of the All Blacks killed us a bit in the last minutes,” said Pumas and ACT Brumbies scrumhalf Tomas Cubelli, who returns to the Australian capital for the test against the Wallabies next week.

“But it does give us a bit of confidence heading into Canberra because we are working the right way.

“Our message at halftime was to stay on task because we were doing a good job, but we only kept it up for another 20 minutes instead of 40.”

Scotland edge out England at Murrayfield