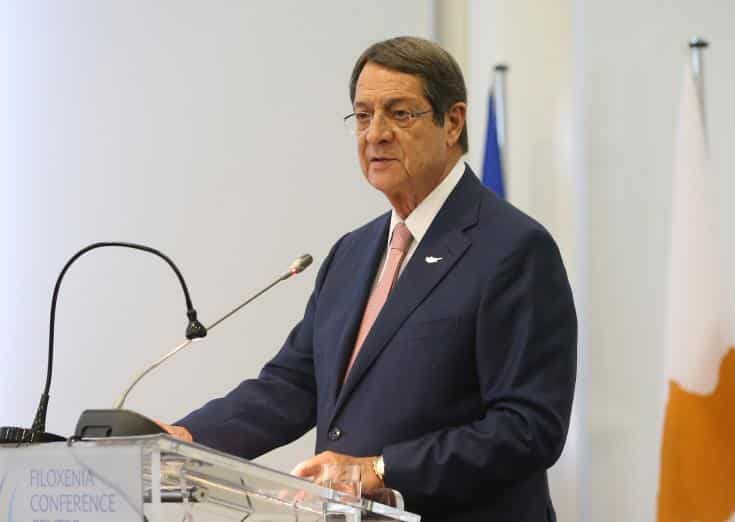 The process aiming at a solution of the Cyprus problem will be resumed, President of the Republic Nicos Anastasiades has said.

In a televised address on the occasion of Cyprus’ Independence Day, celebrated on the 1st of October with a military parade, the President said that the failure to reach an agreement at the Crans Montana talks, held in June-July in Switzerland, will not halt the efforts of the Greek Cypriot side, which is ready to participate in the talks with the same strength and creativity.

Noting that in the past two years great efforts were undertaken by the Greek Cypriot side, he pointed out that for the first time Turkey’s direct participation in the talks was achieved.

“Thanks to our strategy, for the first time the discussion focused on the history of the Cyprus problem and its essence, which is no other than the security of the future state, the abolition of the system of guarantees, the end of dependency and guardianship and the withdrawal of the occupation army”, the President stressed.

He added that these are positions of principle which the UN Secretary-General himself included in the six thematic sections he tabled at the negotiations.

A convergence on this framework could lead to a strategic agreement, giving a new momentum to the process to achieve a comprehensive settlement on the Cyprus issue, the President said.

He dismissed allegations that the Greek Cypriot side was not productive at the talks, saying that it submitted realistic proposals which took into consideration the concerns of both communities and are based on the framework of the UNSG and Cyprus’ participation in the EU and the UN.

The President noted that despite the determination of the Greek Cypriot side, the Turkish positions remained unchanged. Ankara, he added, despite contradictory statements and repeated public commitments to a positive response to the UNGS’s framework, has adopted a firm stance, insisting on maintaining the Treaty of Guarantee, the intervention rights, and the permanent troops presence.

The result, he continued, was a deadlock which caused great disappointment to all those of us who had worked hard and to the people of Cyprus who placed hope on this new effort.

The Cypriot President said that to this end, he conveyed to the UNSG the readiness of the Greek Cypriot side for the immediate resumption of the talks according to his framework and the relevant UN resolutions.

“In order to avoid a new failure, I gave emphasis on the need for good preparation that will allow a new conference to take place on solid ground’, he underlined.

He appealed to Turkey and the Turkish Cypriots, saying that they must realize that a solution must be based on mutual respect without creating winners and losers.

`We can live in a modern European state, a state well organized, without disfunctionalities or open wounds` he said.

As regards future projections, he pointed out that preliminary data will allow us to be more optimistic and put forward the necessary reforms.

Referring to Independence Day, he paid tribute to all those who lost their lives for freedom and democracy and laid the foundations for a country which serves as an example in the region, a country which is proud to be member of the European Union.