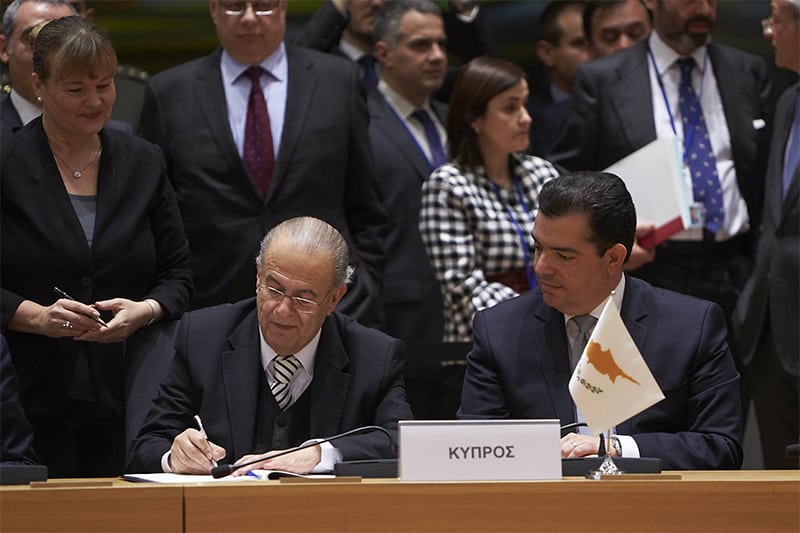 The Permanent Structured Cooperation (Pesco) defence framework to which 23 European Union member states, including Cyprus, committed to on Monday could spell trouble for the island’s still-fragile economy as it calls for regular increases in defence spending to reach agreed objectives.

The agreement – technically the Notification to the Council handed to the EU’s High Commissioner for Foreign Affairs and Security Policy Federica Mogherini – signed on Monday amid pomp and fanfare, particularly from Cypriot officials who claimed it could neutralise Turkey’s argument for demanding the permanent presence of troops on the island for security purposes, includes as-yet not fully fledged out list of commitments.

Among these are “regularly increasing defence budgets in real terms, in order to reach agreed objectives”, “successive medium-term increases in defence investment expenditure to 20 per cent [collective benchmark] of total defence spending”, and “increasing the share of expenditure allocated to defence research and technology with a view to nearing the 2 per cent of total defence spending [collective benchmark]”.

But as economic recovery has seen GDP growth projections estimated at 3.5 per cent this year, the defence-to-GDP – with spending slated to remain more or less stable in absolute numbers over the medium-term – will slip back to 1.7 per cent.

Although no hard spending goals have been set in the Pesco framework yet it is almost certain that these will require spending increases particularly as signatories to the agreement who are also Nato members face a 2-per-cent of GDP contribution target as members of the alliance.

One of the few hard figures included in the notification to the council was the commitment to “medium-term increase in defence investment to 20 per cent of total defence spending”.

“We would have to look at what, if any, spending increases this agreement calls for, and what the impact on the government’s fiscal policy might be, before commenting,” Fiscal Council head Demetris Georgiades told the Cyprus Mail.

“Right now there are no hard figures to look at, and anyway, these are political decisions we have no say on. But if increases in defence spending bring us outside budgetary parametres, we would certainly have to address it.”

Shock and grief in Italy as World Cup dream implodes

Greece declares island in state of emergency after storm hits