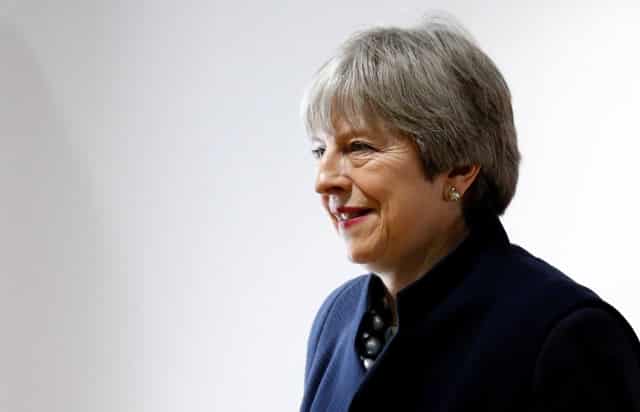 Just hours after a Brexit deal crumbled, British Prime Minister Theresa May came under pressure on Tuesday from opposition parties and even some allies to soften the EU divorce by keeping Britain in the single market and customs union after Brexit.

May’s ministers said they were confident they would soon secure an exit deal, though opponents scolded May for a chaotic day in Brussels which saw a choreographed attempt to showcase the progress of Brexit talks collapse at the last minute.

The Northern Irish party that props up May’s minority government said it was only shown the draft of a deal promising regulatory alignment for both parts of Ireland late on Monday morning and that it had told the government that it was unacceptable.

But the opposition Labour Party said one way for alignment of Northern Ireland with the Republic of Ireland to be acceptable was for the whole of the United Kingdom to stay in the single market and the customs union.

“What an embarrassment – the last 24 hours have given a new meaning to the phrase ‘coalition of chaos,'” Labour’s Brexit spokesman Keir Starmer told parliament. “Yesterday, the rubber hit the road: Fantasy met brutal reality.”

“Will the Prime Minister now rethink her reckless red lines and put options such as a customs union and single market back on the table for negotiation?” Starmer asked.

Nicola Sturgeon, the leader of Scotland’s devolved government, said May’s failure could signal a push to keep Britain in the single market and customs union.

“This could be the moment for opposition and soft Brexit/remain Tories to force a different, less damaging approach – keep the UK in the single market and customs union,” Sturgeon said on Twitter. “But it needs Labour to get its act together. How about it @jeremycorbyn?”

Scottish Conservative leader Ruth Davidson, who has been tipped as a potential future leader of May’s party, also suggested May should consider keeping the United Kingdom in both the single market and customs union.

May has repeatedly said Britain will leave both the single market and the customs union when the United Kingdom ends its membership of the EU at 2300 GMT on March 29, 2019, though she has called for a bespoke economic partnership.

Brexit minister David Davis said voters had chosen to leave the EU and that included both the single market and the customs union.

Sterling rebounded from a six-day low against the euro on Tuesday to trade flat on the day, with investors cautiously optimistic that a deal on opening up talks on post-Brexit trade would be reached by the end of the week.

May, who is now scrambling to thrash out a deal with the EU while keeping the DUP and her own party onside, may return to Brussels as early as Wednesday to continue talks, a Downing Street official said.

“We’re very confident that we will be able to move this forward,” finance minister Philip Hammond said as he arrived for a meeting with EU counterparts in Brussels.

A European Commission spokesman said it was ready to resume Brexit negotiations as soon as London signals it is ready.

But the EU will only move to trade talks if there is enough progress on three key issues: the money Britain must pay to the EU; rights for EU citizens in Britain and British citizens in the EU; and how to avoid a hard border with Ireland.

All sides say they want to avoid a return to a hard border between EU member Ireland and the British province of Northern Ireland, which might upset the peace established after decades of violence.

“We will not allow any settlement to be agreed which causes the divergence politically or economically of Northern Ireland from the rest of the United Kingdom,” Nigel Dodds, deputy leader of the Democratic Unionist Party (DUP), said.

Dodds said the party would work for as long as needed to get the Brexit deal right but accused Dublin of acting in a reckless and dangerous way that was putting years of Anglo-Irish cooperation in danger.

“As things stand, the ball is very much in London’s court. There is time to put this agreement back on track and we await to hear from London as soon as they’re ready,” Varadkar told parliament.

Alec Baldwin is set to launch his own TV show