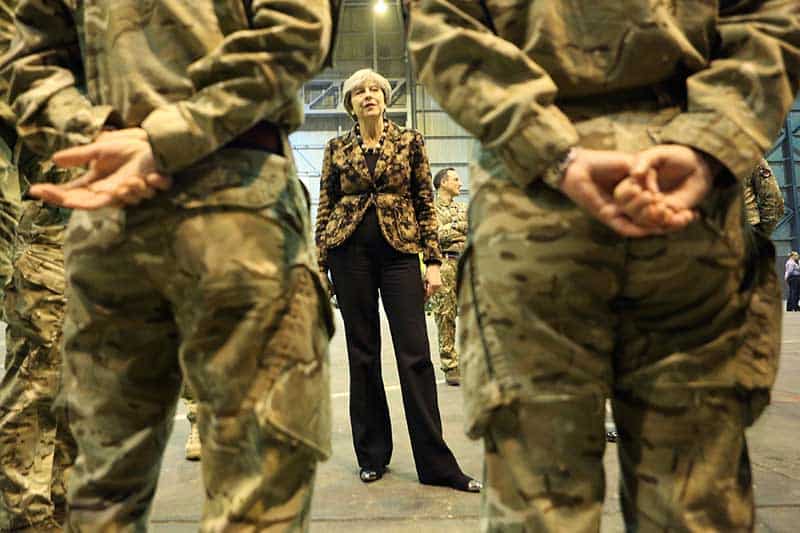 Prime Minister Theresa May on Friday told British forces in Cyprus that they should be proud of helping to crush the caliphate declared by the militants of Islamic State.

Speaking at the RAF Akrotiri base, May said facilities on the island were the “epicentre” of operations against Islamic State, which she called Daesh.

“Today, thanks in very large part to your efforts, the so-called Caliphate has been crushed, and no longer holds significant territory in Iraq or Syria,” May told about 200 members of the armed forces.

“You should be incredibly proud of that achievement.”

She also thanked Cyprus as the UK’s hosts “for all they do to enable you to operate from here.”

Akrotiri has been used as a staging post for attacks against Islamic State, now largely defeated after attempting to set up a radical theocratic state or caliphate across swathes of Iraq and Syria.

“We need to continue to deal directly with the threat they still pose in the region,” May added, standing in front of a Tornado and a Typhoon fighter jet parked outside a hangar.

“We also need to focus on training the Iraqi security forces so they can keep Daesh out, which is why the work we are doing, and you are supporting, to train over 60,000 Iraqi security personnel is so vital, as I saw first-hand on my visit to Baghdad last month”.

“It is also from here in Cyprus that you are sustaining our efforts to support the wider stability of our allies in the Middle East,” she added.

She said that these efforts include the expansion of the Quick Reaction Force in Jordan and the United Nations on Operation TOSCA to help keep the peace along the buffer zone in Nicosia.

Britain has about 3,100 military personnel stationed at two bases in Cyprus. It retained sovereignty over about 98 square miles, or 3 per cent, of the island’s territory after granting independence to the colony in 1960.

More than 1,600 air strikes on Islamic State targets have been launched from the facility since 2015 as part of a campaign by a US-led multinational coalition.

May also praised the soldiers’ professionalism, courage and sacrifices, saying that all these “give meaning to the pledges we make as a nation”.

Extra police officers on the roads over Christmas