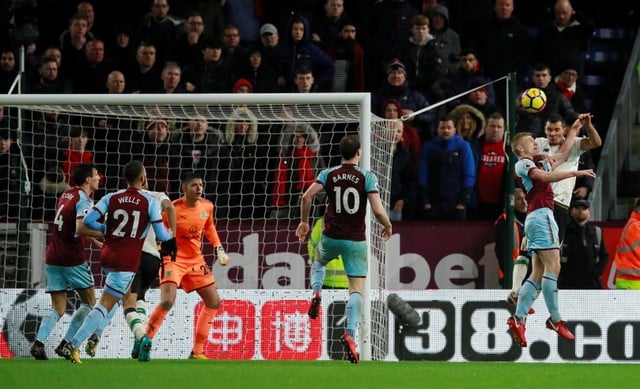 Liverpool defender Ragnar Klavan’s 94th-minute header snatched a 2-1 victory at Burnley on Monday as the visitors coped without the injured Mohamed Salah and Philippe Coutinho and made up ground on their rivals near the top of the Premier League.

With Chelsea and table-topping Manchester City playing later in the week, Liverpool registered their second win in 48 hours after the Estonian popped up with his first league goal.

On the blue half of Merseyside, Manchester United climbed back up to second in the table after second-half goals by Anthony Martial and Jesse Lingard earned a 2-0 victory at Everton — their first win in five games in all competitions.

All the managers rotated players to deal with a busy festive period and Liverpool boss Juergen Klopp made seven changes, including giving Adam Lallana his first start this season, against a Burnley side who have often troubled the Merseysiders.

The absence of Coutinho will prompt inevitable speculation about the his future on the day the transfer window opened although Klopp said the Brazilian had a thigh injury.

With Liverpool’s top scorer Salah also ruled out with a groin strain and Firmino on the bench, Sadio Mane was the only member of their ‘Fab Four’ to start.

He opened the scoring with a superb strike after 61 minutes, picking up the ball with his back to goal and spinning to fire an unstoppable left-foot shot into the corner.

“He (Mane) came into the dressing room and the whole team got up and gave him a hand, because they know — he will be back on top,” Klopp said.

“In so many moments he is strong, quick, so many things. And in the other moments where it doesn’t click, he scores a goal like this and it is like ‘wow’.”

Burnley thought they had salvaged a point when Berg Gudmundsson equalised in the 87th but Klavan secured a win that moved Liverpool to 44 points, a point behind Chelsea.

With no Romelu Lukaku in the United side, Jose Mourinho’s men were struggling to break down an Everton side who have become much more resolute under new manager Sam Allardyce.

However, Paul Pogba unlocked the Everton defence with a pinpoint pass into the feet of Martial, who controlled the ball brilliantly before curling it home in the 57th minute. Jesse Lingard’s clinching strike late on was equally well executed.

“We found a way to play without a player like Lukaku or Zlatan (Ibrahimovic) with more dynamism and freedom,” Mourinho said. “I think we played very well, second half better than the first.”

United’s victory took them to 47 points from 22 games behind local rivals City, who lead the standings on 59 after their 0-0 draw at Crystal Palace on Sunday and have a game in hand.

As eye-catching as Senegal international Mane’s goal was, it was probably topped by Riyad Mahrez’s opener for Leicester.

The Algeria midfielder, who like Coutinho has been linked with a January move, produced the deftest of sidefoot volleys to give Leicester the lead against Huddersfield, with Islam Slimani and Marc Albrighton adding further second-half goals.

A good day was made even better for the Foxes by a late cameo from Adrien Silva, who has had to wait to play his first game for the club after his move from Sporting was not registered in time in the last transfer window.

Stoke’s Hughes left the field to a torrent of abuse from supporters after his side’s latest setback, a loss made all the worse because the Welshman had rested players in the 5-0 defeat at Chelsea on Saturday to prepare for Newcastle’s visit.

Ayoze Perez scored the winner as fellow strugglers Newcastle United recorded back-to-back Premier League wins on the road for the first time since 2014.

Bournemouth are another side looking anxiously over their shoulders after starting 2018 five points worse off than last year but Eddie Howe’s side will be pleased with their point at Brighton.

Bournemouth’s Steve Cook and Brighton’s Glenn Murray both scored against their former sides after Anthony Knockaert got the year off to a good start for the home side by scoring their quickest ever Premier League goal after five minutes.

However, Callum Wilson secured a point for the visitors after a frantic scramble in the area when Brighton failed to clear their lines. (Reporting by Neil Robinson; Editing by Ken Fer

Film review: The Killing of a Sacred Deer ****