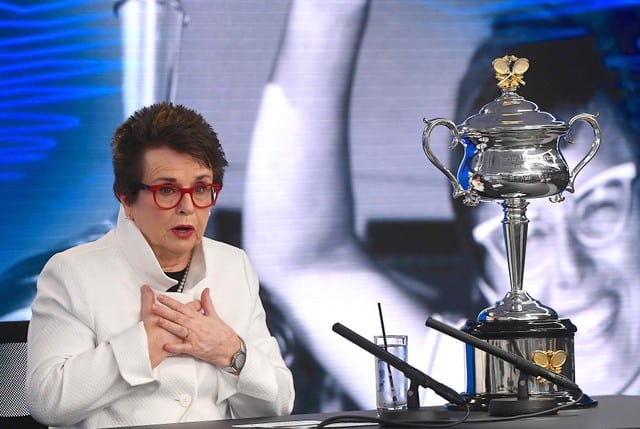 Billie Jean King speaks at a media conference in Melbourne

Twelve-time grand slam champion Billie Jean King said on Friday that Margaret Court’s name should be stripped from the Australian Open showcourt due to her divisive views on sexuality.

American King’s comments follow a report in the New York Times on Thursday in which Martina Navratilova said she would refuse to play on Margaret Court Arena if still competing.

A contemporary of King, 75-year-old Court is a Christian pastor and has campaigned against same-sex marriage, which recently became legal in Australia after a plebiscite last year.

The Australian also caused a furore last year by telling a Christian radio station that transgender children were corrupted by “the devil” and that tennis was “full of lesbians”.

“I personally don’t think she should have her name (on it) any more,” King, 74, told reporters at Melbourne Park.

“I was fine until lately she said so many derogatory things … That really went deep in my heart and soul.”

King, a lesbian and equal rights activist, said she had advocated for 24-time grand slam champion Court to be recognised at Melbourne Park after centre court was named after Australian men’s great Rod Laver in 2000.

But she had recently changed her mind after a number of controversial comments by Court, who won the Australian Open 11 times between 1960 and 1973.

“If I were playing today, I would not play in this court,” she said.

King said she would not encourage players to boycott matches in the showcourt over Court’s views, however.

“Maybe some of the gay players wouldn’t want to play there. I wouldn’t encourage them not to do it,” she said.

Australian Open tournament director Craig Tiley said there had been “conversations” about changing the name of the stadium but added there were no plans to do so.

“Margaret’s views are her views … A name change is up to a broader group of people and not up to one person or organisation.”

Court has been a fixture in the stands at the season’s first grand slam but elected to skip the tournament this year, Tiley confirmed.

“I wish Margaret was here this year,” she said.

“We usually sit next to each other.”

11.683 overseas voters have registered for elections

Cash and jewellery stolen in break-in