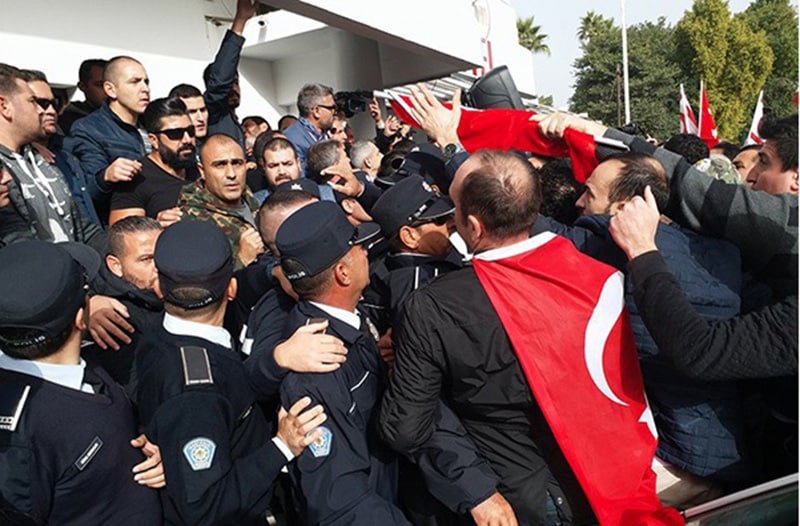 The crowds outside Afrika on Monday

What took place outside Afrika newspaper’s offices in north Nicosia on Monday was scary. An angry mob of ultranationalists gathered outside the building, waving Turkish flags, throwing rocks at the newspaper’s office and smashing windows. They then climbed on to the balcony and entered the premises, but were prevented from attacking staff by the police which arrived just in time. Nobody could say what would have happened if the police were a few minutes later arriving.

More police eventually arrived and dispersed the crowd, which went to ‘parliament’, across the road, where the swearing in of the newly-elected ‘MPs’ was taking place. Things may have quietened down on Tuesday, but what happened is a worrying sign of the way things are changing in the north. The intolerance and authoritarianism of President Erdogan have reached the north, where there seem to be plenty of fanatics intent on crushing his critics. All that is needed is Erdogan’s signal, which, in this case, was given by the president himself.

Afrika published an article on Sunday saying that Turkey’s military operation in Syria was like Turkey’s invasion of Cyprus, a view that was bound to provoke the anger of nationalists. What was amazing was that Erdogan also expressed anger over the article, calling “on my brothers in north Cyprus to give the necessary response.” This was incitement to violence by Turkey’s head of state who seems so intolerant of criticism that he turned his local heavies against a low circulation newspaper, of little influence, in north Cyprus for daring to question his Syria policy.

His authoritarian mentality has its representatives in the north, where one of Erdogan’s henchmen, the local representative of Turkey’s Justice and Development Party, demanded the closing down of Afrika, saying “only a Greek Cypriot paper could be so traitorous and cowardly.” Erdogan’s authoritarianism and contempt for Western liberal values has not just reared its ugly face in the north but there are also plenty of extremists eager to enforce it; not a positive development for the Turkish Cypriots.

Turkish Cypriot leader Mustafa Akinci said all the right things about the violence. While he disagreed with Afrika’s view and defended Turkey’s military action in Afrin, he condemned the violence and called for respect for the right of freedom of expression. In a way, it was indicative of the situation in the north that Akinci was jeered by the mob outside Afrika when he approached and was forced to get in his car and leave the scene. The fanatics were acting on higher orders and showed as much respect for their ‘president’ as they did for the right of free speech.

MEPs to attempt to visit Varosha