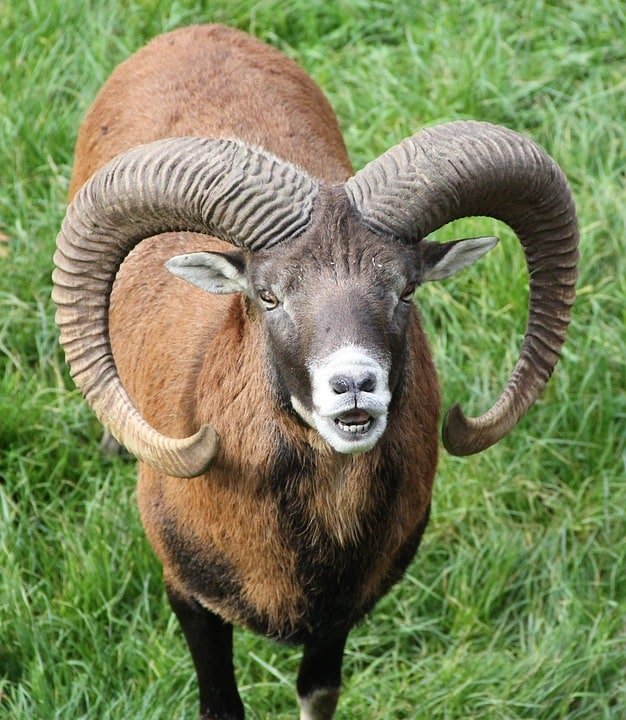 The number of mouflon has stabilised at about 3,000. It has been protected since 1992

In a coffeeshop in Gerakies, encircled by half a dozen elderly local farmers, the community leader of the nearby village of Kalopanayiotis in the Nicosia district, Yiannis Papadouris bemoans the fact that “at some point, Gerakies had 600 residents and 60 mouflons. Today they have 600 mouflons and 60 residents.”

“There’s not even 60 left!” another patron shouts. “Forty five” chimes in a man at the other end of the coffeeshop, as I turn and realise that everyone within earshot was focusing intently on our table, except for those sitting at the table with a game of pilotta in full swing.

I drove up to the mountains recently to meet ‘Mr Yiannakis’ at his farm just outside Kalopanayiotis, looking over a river passing through his beautifully tended orchard which extends as far as the eye could see.

Soon, we were on quad bikes following a local guide along the dirt roads that spiralled across the mountains, which would eventually take us to the neighbouring village of Gerakies where the farmers would be gathered.

We set out looking for Cyprus’ endemic mouflons, a sub-species of wild sheep that, with an 8,000 year history, is unique to Cyprus, and which came close to extinction during the Ottoman years and has been protected since 1992.

Once confined in a comfortable habitat in the Paphos forest, the destruction that took place during the 1974 war depleted the resources that had sustained them, causing them to move further and further eastward in search of food and water. They travelled into the mountain villages where their survival on crops cultivated by locals has however also led to the impoverishment of many village households.

I wasn’t going to see any more of the likes of Papadouris’ blooming orchard in these mountains because the mouflons had have torn through the local crops, with the government and the game and fauna service mostly leaving the affected residents to fend for themselves, they said.

In the summer, much like us humans, mouflons are most active at the time of day when temperatures cool down, so our late afternoon quest was fruitful but not so much in terms of seeing actual fruit on trees along the mountain slopes abundant with orchards and vineyards.

“Look! There’s the trail the mouflons have made to move up and down the slopes, eating what they find along the way” said the local guide as he jumped off his quad bike to run up the trail.

We made two more stops before reaching Gerakies. One to see an entire slope, which once used to be a flourishing orchard, now desolate with the exception of a few disparate shrubs, and another stop at a piece of land which was fenced off, containing the only trees with crops intact that we had seen since Papadouris’ property.

“Fencing is the only way, even if we have to fence off the entire village,” said Marios Charalambous, the community leader of Gerakies after we’d arrived at the coffeeshop where a group of local farmers had gathered to talk about their lost livelihood.

“From 1960 until 1974, Gerakies produced a minimum of 100 tonnes of the sweet soujouko, and took at least 400 barrels of zivania to the Sodap winery in Limassol. Today, Gerakies produces at the most 100-150kg of zivania and 2-3 tonnes of soujouko. Where did all that go?” asked one of the local farmers.

In Gerakies, there are currently three vineyards that continue to produce, and all three are fenced off. Needless to say, Papadouris’ orchard is also fenced off. But the rest cannot afford to do so themselves.

In the old days, Gerakies had 11 traditional coffeeshops, around 1,000 residents and a primary school with around 80 students. Many had to leave for the cities or for other countries for various reasons, one being, the villager say, ‘the coming of the mouflons’.

“The resident of this area rarely managed by doing just one profession – he was part farmer, part miner, part artisan, he made his own products. It was this multi-professionalism kept locals in place in their villages,”Papadouris said.

Some local Gerakiotes worked in mines, such the CMC mines in Skouriotissa, while some others worked in Amiantos. With the closing of these mines, locals couldn’t sustain themselves exclusively from their crops, and so they looked for work elsewhere. Families moved to the cities, with the idea that if they came up to the village on weekends to tend to their crops, they’d be okay. But unfortunately, things didn’t work out that way, as they’d come up to find that their vineyards and orchards had been eaten by mouflons.

Up to 2006, farmers whose crop was damaged by mouflons were compensated by the government but that is not an option anymore, while the measures implemented since then are what the villagers call “half-measures”. The agriculture ministry’s current scheme promises a certain degree of compensation for damaged crops and a small grant towards the fencing of lands in areas where mouflons now roam freely.

“The government has implemented a policy of compensation, but the amount is so small that it helped just a small number of the affected. And in terms of the grant for fencing, they’re offering €9 per metre so that we can fence the land off ourselves,” Charalambous said.

Papadouris jumps in: “The first thing that comes to mind is, is €9 enough?”

“It doesn’t even cover the purchase of the supplies,” Charalambous said.

“It doesn’t even cover the poles!” one of the local affected farmers chimed in.

“And what about the workers? Who’s going to pay them?” said another.

Charalambous looked on sternly, and said “the real question is, say okay, I put in the extra money out of my already-empty pocket and I fenced off my land. When I do, and I keep the mouflons off my land, where is it going to go next? To the next property! And on it goes, as it’s already been going for years now.”

“As pleasant as the mouflons are which are rightly protected, at some point the villager and the farmer also needs to be protected,” Yiannakis said.

One of the farmers who had been silent for a while suddenly burst out: “They want to protect this animal, but what are they really doing to protect it? Are they cleaning the water in its former habitat which it was forced to leave? Are they providing it with food?”

“When the English came only 15 mouflons were left, and they took an area of around 30km in the Paphos forest and put them in there for their protection. No one could go in, especially not poachers, not even shepherds! They took care of them, cleaned their water, their wounds. And today there are 3,000 mouflons on the island. These things don’t happen today. What do you expect from an animal that has no food, no water, no care? It’ll go where it can find it,” he continued.

A man sitting on the opposite table listening in said: “You know, I bought three dogs just in case mouflons happen to go near my yard and my crops, but I still lie awake all night. Seriously, I’ve got three dogs and they bark all night and I get up with my shotgun and shoot into the air to make the mouflons leave. Do you understand? What am I supposed to do? Poison them? Kill them? Are we going to have to commit crimes just to protect our crop?”

The Cyprus mouflon has been a strictly protected subspecies since 1992, under an EU habitats directive (92/43).

Although active management and protection have resulted in an increase in the mouflon population from a few dozen in the 1930s to more than 3000 today, they are still considered rare due to being endemic to the island.

In June this year, farmers whose produce was being damaged by mouflons asked the state to compensate them and fund protection measures as the animals were now even visiting coffeeshops in some villages.

The issue has been going on for years and MPs have said on numerous occasions in recent years that the mouflon population was getting out of control and a plan was needed to deal with it.

The Game and Fauna service, which is responsible for the management of the species says that whenever an individual’s crop is damaged by mouflons, the service will visit the affected farmers and offer advice as to how to keep the animals away, such as the use of fencing, lighting, even leaving the radio playing for a few hours.

In the past the department has also suggested spraying the leaves of trees with a substance which gave an unpleasant taste but that it was not available in the local market anymore.

Up to 2006 farmers whose crop was damaged by mouflons were compensated by the government but that is not an option anymore following EU instructions.

The agriculture ministry launched a new scheme in 2016 where farmers are given an amount of money if they leave 10 per cent of their crops or fruit unharvested so that mouflons and other animals can eat them as a form of indirect compensation for damage.

The Game and Fauna service has also placed a large number of drinking troughs in the areas where mouflon populations are found, and that they were also sowing seeds for grain crops to grow in cleared forest areas for mouflon to eat to keep them in forest areas.

The number of mouflons has not risen dramatically in recent years and appears to have stabilised at around 3,000. Mouflons also face dangers from poachers, with cases in recent years indicating that mouflon meat was selling illegally at around €80 a kilo. Young mouflons are also killed by packs of feral dogs and several have also been found dead after being hit by cars.