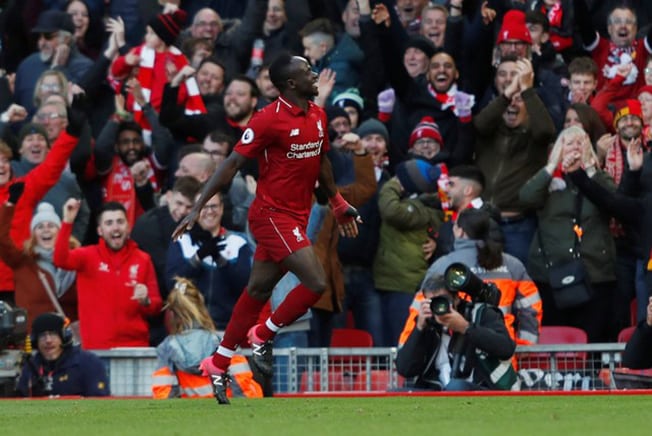 Liverpool moved back to the top of the Premier League as Neil Warnock’s assessment of Cardiff’s hopes at Anfield proved accurate.

Warnock delivered a startling admission that trying to get a result on Merseyside was “virtually impossible” on the eve of the fixture, and his Bluebirds side rarely looked like proving him wrong.

The only blemish for Liverpool came when Cardiff striker Callum Paterson scored a scrappy goal, dashing the Reds’ hopes of extending their run of clean sheets in the top-flight at home to 10 matches.

Paterson’s effort seemed to set up a grandstand finish but in truth Cardiff were comfortably second best, with only two attempts at goal, in stark contrast to 19 from Liverpool, who enjoyed 80 per cent possession.

The hosts went ahead with their first real sight at goal, Salah needing little invitation to take his tally to 51 goals for the club after Cardiff were unable to sufficiently deal with Trent Alexander-Arnold’s routine cross.

Last-ditch blocks denied Mane and Georginio Wijnaldum but the ball fell to Salah, who made no mistake in tucking home from a narrow angle in the 10th minute.

The Egyptian turned provider moments later, whipping in a cross that led to Virgil Van Dijk getting ahead of Sol Bamba before heading against the outside of the post.

Salah was once more in the thick of the action when he went down in the area under a challenge from Sean Morrison but referee Stuart Attwell waved play on.

Following a frantic opening, Cardiff then settled down and were able to keep their opponents at bay, with Liverpool seeing plenty of the ball but starved of time and space in the box.

Liverpool’s threat, therefore, largely came down both wings and it was left-back Alberto Moreno – starting for the first time in the league this season – who fashioned an opportunity in the last act of the first half.

From the left touchline, the Spaniard found an unmarked Adam Lallana at the back post but the England midfielder’s diving header was cleared off the line by Morrison.

Liverpool – who had 12 shots on goal compared to none from Cardiff, but with only two on-target in the first 45 minutes – were almost caught cold just after the resumption.

The visitors bundled the ball in after Morrison had headed back across goal but it was ruled the centre-back had been marginally offside when latching on to Victor Camarasa’s free-kick.

The Reds soon reasserted their authority and doubled their lead in the 66th minute when Mane collected the ball on the edge of the area and shrugged off a couple of challenges before rifling past Neil Etheridge.

But from nowhere, Cardiff were given a lifeline with 13 minutes remaining courtesy of their first shot at goal.

There looked to be little danger when Junior Hoilett’s weak cross deflected off Van Dijk but Paterson was alert to the situation and got the final touch to nutmeg Alisson, who had been a virtual bystander for most of the match.

As Cardiff chased the game, they left themselves vulnerable and Shaqiri restored Liverpool’s two-goal lead, receiving Salah’s pass before jinking his way past Morrison and slotting beyond Etheridge in the 84th minute.

Mane added gloss to the scoreline after exchanging passes with Salah before lifting over Etheridge.

In other games, Bournemouth beat Fulham at Craven Cottage 3-0 and moved to the sixth place in the table in a surprisingly positive start of the season.

Likewise, also Watford saw off Huddersfield 3-0 to secure the Hornets’ best-ever start to a top-flight campaign.

Finally, Newcastle failed to win their first league game this season against fellow strugglers Southampton, but managed to move up the bottom of the table, with their infamous spot now taken by Huddersfield.

Last switch to winter time? Clocks turn back on Sunday