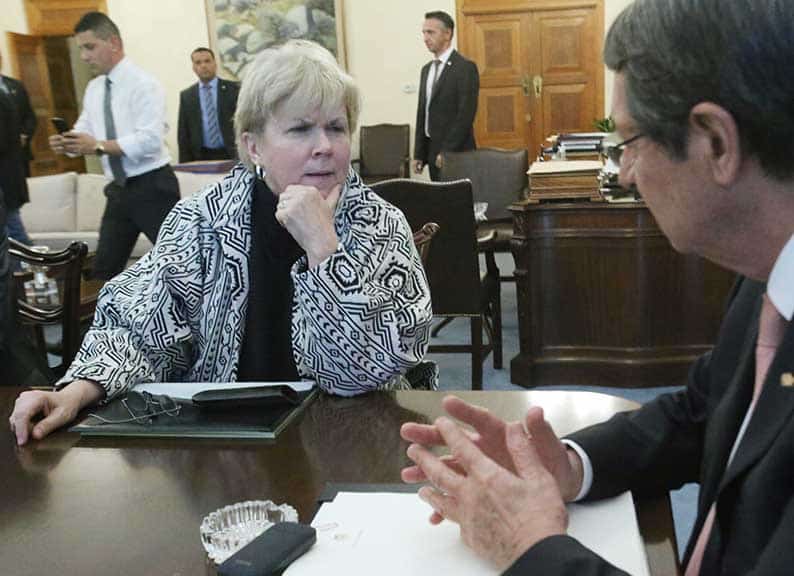 President Nicos Anastasiades’ meeting on Wednesday with the UN secretary-general’s envoy, Jane Holl Lute, lasted around two hours but she left without making any comments.

Lute arrived in Cyprus late on Tuesday to hold a second round of separate meetings with Anastasiades and Turkish Cypriot leader Mustafa Akinci as part of a fact-finding mission. She has been tasked by the UN secretary-general to continue discussions with the two sides to explore their willingness to propose new ideas as part of an overall solution.

The meeting with Anastasiades began at 11.30am and ended around two hours later. She made no statements after the meeting before going on to meet with Akinci later in the afternoon.

According to the spokesman, Lute conveyed the UNSG’s position that the parties should agree on the terms of reference for the resumption of talks as soon as possible.

Anastasiades welcomed the UNSG’s position that sound preparation was necessary beforehand and discussed his positions on how to achieve a functional solution through devolution, without altering the basis of the negotiations, Prodromou said.

Lute met Akinci for two and a half hours in the afternoon but again made no statements afterwards.

Akinci spokesman Baris Burcu issued a brief statement afterwards which said that there cannot be open ended procedures in the negotiations and there must be a result.

Akinci, the statement said, highlighted once again “the importance of political equality and effective participation in a possible settlement”.

Before the meetings, Lute was to be briefed by the UNSG’s Special Representative in Cyprus, Elizabeth Spehar and the UN good offices mission team on the latest developments on the Cyprus problem, especially on the leaders’ meeting last Friday.

Lute will leave Cyprus early on Thursday for New York.

Turkish Cypriot ‘foreign minister’ meanwhile said the rules have changed since a Turkish drillship started an exploratory drill off Turkey.

Ozersay said in 2015 the two sides had mutually decided to postpone these works because negotiations were taking place.

“In the period following the agreement, the Greek Cypriot side continued these works. The Turkish Cypriot side had sort of postponed these works with Turkey. From now on, we will not allow anyone to stop our work using the negotiations as an excuse.”

Unemployment falls to 7.4 per cent, largest annual drop in EU