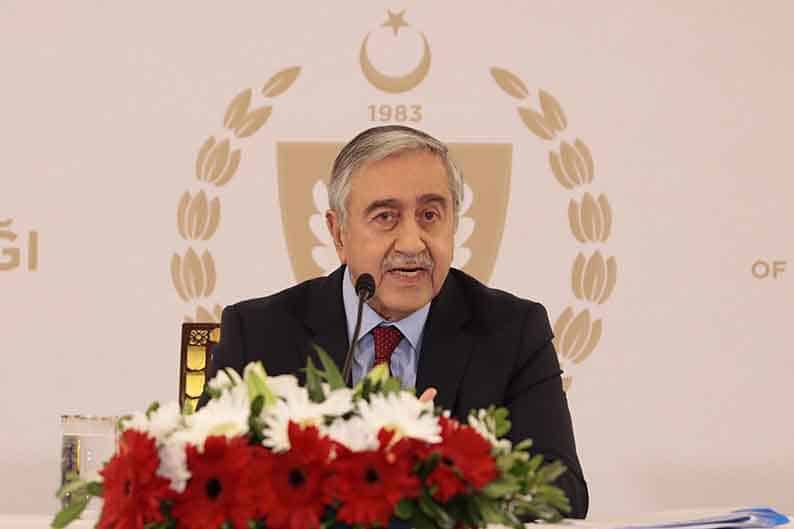 Turkish Cypriot leader Mustafa Akinci said Monday his side was open to the idea of reducing the federal government’s powers post-solution but they would never accept decisions to be taken on the basis of simple majority.

Speaking at a news conference in the evening, Akinci said he wanted to address all communities on the island, stressing that he was not only responding to last Monday’s news conference by President Nicos Anastasiades and did not want to foment a war of words.

Akinci said the Turkish Cypriot side was not opposed to the idea of devolution as long as a concrete proposal is set on the table so that it can be evaluated in a procedure that will be focused on the result and not open ended.

“But I want to make something clear, so far, the Greek Cypriot side’s stance in the negotiations was exactly the opposite,” Akinci said.

He stressed that even if the powers of the constituent states increased, “we will not accept decision-making in the central government to be on the basis of simple majority-minority.”

Akinci said without joint decision-making it would mean either two separate states or a unitary state and the ongoing effort was for neither.

The Turkish Cypriot leader said throughout his entire political career he considered the aim of federation feasible under the current circumstances and that is why “I wonder when I see the Greek Cypriot leadership viewing federation as a painful compromise.”

The current reunification model is a logical solution that can unite the two communities who have been living separated for over four decades, Akinci said.

Realists know that the formula in the hands of the two communities is none other than bizonal, bicommunal, federation and that was because it was clear that Turkish Cypriots would not accept having minority rights and be dominated in a unitary Greek Cypriot state, Akinci said.

He suggested that the large majority of Greek Cypriots did not approve of the creation of two separate states.

Political equality did not mean numerical equality in every federal institution but it will mean effective participation in the decision-making of all federal bodies, he said.

The issue of one positive vote from each side has been discussed and has been accepted; it was also agreed that decisions on foreign policy, security, and defence would be made jointly by the president and deputy president of the cabinet, the Turkish Cypriot leader said.

If the explanations given by Anastasiades are followed, “the situation will become very confused.”

Of the example used by Anastasiades last week, suggesting that Turkish Cypriots should not have a say in natural gas decisions because they wanted a pipeline to go through Turkey instead of Greece, Akinci said it showed that neither the Turkish Cypriots nor Turkey had a place in energy policy even post-solution.

Akinci said the example showed that Anastasiades “now considers the agreed effective participation of Turkish Cypriot ministers in the cabinet as void. Second, he does not see energy maters as being of vital importance to Turkish Cypriots …”

The question was, according to Akinci, “whether we will allow the future to be unclear and open to dangers, become the reason for new generations to face pain and anguish, or assume our responsibilities and act accordingly? Can we succeed and instead of sharing new pain in the future, share powers and prosperity? This is the question we have before us that must be urgently answered.”

Djokovic and Zverev off to winning starts at ATP Finals