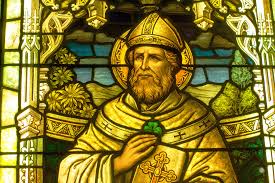 Patrick had lived among the savage, marauding Irish for years and knew their little foibles inside out

Sunday the 17th March will witness anywhere in the world where Irish Diaspora has set up camp either temporarily or permanently, a celebration of Ireland’s beloved patron saint – Patrick. A fair amount is known about the man and the way in which a former slave of Patrician Roman parents in his mature years brought Christianity to the green isle that had treated him so harshly in his youth.

Practically nothing is heard about his female counterpart – St. Brigid, spelled in various ways throughout Europe and legend. She is said to have been born at sunrise on February the first, her present feast day. She went from being the daughter of a wealthy man who tried to marry her off for his own ends, to become the founder of monasteries in various parts of Erin; the most famous was established at Kildare.

Her pagan namesake, Brighid, was a lady of many talents, you can find her under goddess of smithwork, poetry and healing. She was a busy lady who also catered for women in labour – due to her added fertility status. The pagan form was celebrated at the festival of Imbolc, on February 1st when ewes came into milk.

The thing is – similar attributes are listed for the Christian lady. Some say she is probably a composite of all the elements accredited to her pagan predecessor and not a real person but rather a persona taken by early Christian PR and grafted onto an invented Christian saint to encourage heathens towards the newly founded body of Christian believers. Other sources say the saint may have been a former priestess of the pagan deity adopted by Christians for the above reason.

Author Thomas Cahill says in his very interesting book How the Irish Saved Civilization that she was a convert of St. Patrick’s, possibly a noble woman, and the immense double monastery she founded admitted both men and women, another irregularity that would have deeply offended Roman Christian sensibility further afield, which to this day imagines rule by a woman over men as a perversion of the natural order.

Not surprising then that Paddy, with a little help from the male boy’s club in the Vatican, has lorded it over Biddy for centuries and is celebrated on a far wider scale than herself who was, by all accounts, a lady of strength and determination. Cahill also writes that her monastery began under a huge oak, the sacred tree of the druids – thus Kildare, which means ‘Church of the Oak’. So perhaps that notion of her having been a pagan priestess prior to her conversion may have some truth in it. Patrick’s acceptance of women in major roles in his church put him ahead of his time and his fellow priests.

He showed patience with these habits and customs possibly because, wise man that he seems to be from what remains of his history, it is better to go gently into changing centuries of habits than trying to bash them down all at once and possibly get yourself killed in the process. There was, however, one custom that must have caused him sleepless nights – how to go about stopping human sacrifices.

Cahill goes on to explain that while other religions had stopped killing humans and had substituted animal sacrifice instead, during Patrick’s early mission that was still in vogue in Ireland. The warriors wore severed heads as we might wear faux bijou. There was the god of war, Cahill says, to which prisoners of war were sacrificed, and newborns died to accommodate the goodwill of harvest gods. The shamrock, a national symbol, is said to have been used by Patrick to explain the Holy Trinity. It is also believed he expelled the snakes from Ireland.

In his enjoyable read The Irish (and other foreigners) From the first people to the Poles, Shane Hegarty, a former journalist at The Irish Times and now highly successful author of children’s books says “The Sunday Times announced: ‘Fort discovery proves Romans invaded Ireland.” explaining that a nondescript patch of land 15 miles north of Dublin ….indicates that the country was, after all, invaded by Romans.” It accompanied the piece with an editorial commenting: ‘Two fundamental axioms about Ireland that every schoolchild once learned were that Ireland was free from snakes (a) and (b) from Romans. Both axioms now appear to be wild Irish bull.’ The site was never officially excavated, at least not at the time the book was published. But snakes have been seen since in Eire.

Back to St. Bridgid, and the match making game. Cahill tells us her father was appalled to find his beautiful daughter giving away his stores to beggars, so he chucked her in his chariot and took her to the King of Leinster. He had to remove his sword, out of respect, and left it in the chariot. Along came a leper begging for help; Bridgid gave him the sword. When daddy comes back with the king he’s furious over the sword and beats her.

The king cries ‘Stop!’ and asked the girl why, to which she replied, ‘If I had power, I would steal all your wealth and give it to Christ’s brothers and sisters.’ The king, offering the excuse that she was ‘too good’ for him, bowed out and Brigid escaped to become an abbess.

We will probably never know the whole truth about early Irish saints, but we still honour and celebrate them. Religious reasons apart, we Gaels love a good yarn.

Can a moderate white male win the 2020 Democratic primary?