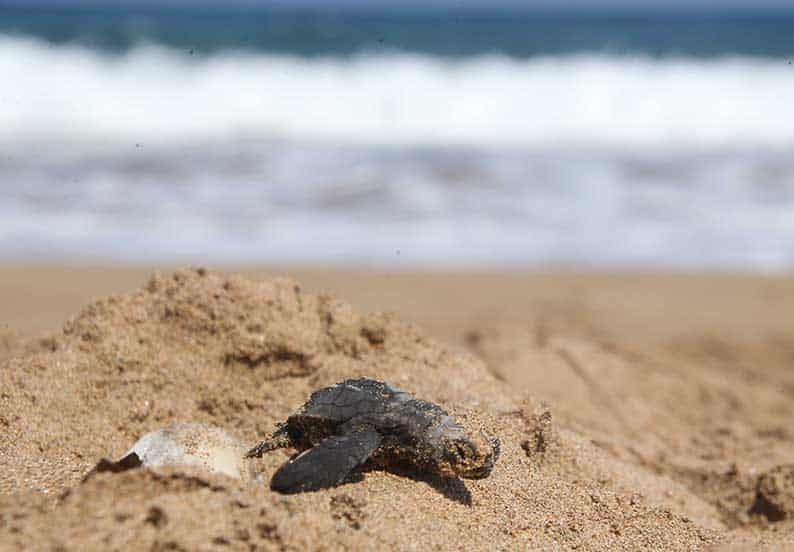 The forestry department said on Saturday it had acted correctly in bulldozing and burning off acacia trees along a strip of around 700 metres of the Mavralis state forest, which was lining the protected sea turtle spawning beaches of Limni and Argakas at Chysochous bay.

The news caused outrage and concern over the effects on the turtle population. The Green Party said there was “reasonable suspicion that this brutal ‘cleansing’ of the vegetation on a beach with nesting turtles is designed is to meet the requirements of major interests relating to a tourism project”.

According to reports, just one month prior to the initiation of the sea turtle egg-laying season, the forestry department proceeded with the removal of a long strip of state forest composed mainly of acacia trees through the use of heavy construction vehicles in the Polis-Yialia area.

The area, part of the EU-wide Natura 2000 network of protected areas, forms one of the most important breeding sites in the Mediterranean for the endangered Loggerhead (Caretta Caretta) turtle.

Though acacia trees are considered a foreign invasive species, which was also pointed out by the forestry department, the specific strip of trees had served as an indispensable protective barrier for baby sea turtles, as the trees blocked light sources emanating from the adjacent road and nearby buildings. Lighting near the shore can cause hatchlings to become disoriented and wander inland rather than heading for the sea. If they go in the wrong direction they risk dehydration and predation.

In an announcement on Saturday, following a surge of media reports and public outcry on social media, the forestry department said that the removal of acacia trees, which it said are considered one of the most invasive species for the natural habitats, as well as for the endemic, rare and endangered species of Cyprus, were rightly disposed of.

The department noted that while acacia trees began to be planted around 40 years ago to stabilise coastal dunes, and not as a protective measure for sea turtles, the tree species was then dubbed a threat during the area’s integration into the Natura 2000 network.  Efforts towards the removal of acacia trees were launched in September 2017 in areas across Cyprus, the department noted.

The removal on Friday, which were ironically completed on the international day of forests on March 21, were carried out without an appropriate assessment (AA), which serves to assess the potential adverse effects of a plan or project on protected areas, media reports said, reports said. The forestry department’s announcement did not include a denial. The issue of whether the forestry department had the necessary licences authorising the removal of trees also remained unclear from the statement.

Moreover, Alexandrou later had told Phileleftheros that a strip of 150 metres of acacia trees of the state forest adjacent to Limni bay were removed, though photo documentation of the works show that the forestry department removed almost five times the stated amount, before setting the trees on fire on site, causing a dense cloud of smoke over to hover over Argakas community and leaving behind piles of ash and charcoal with unpredictable effects on the biotope.

The forestry department said that “the fact that the acacia trees offered protection to sea turtle species was taken into account,” noting that the removal of the trees was carried out before the breeding season and would therefore have no immediate effect.

It said that as an immediate measure, an opaque fence will be installed to block out light sources, while tree planting will follow in the future.

However, in addition to failing to refer to the damage to the biotope caused by heavy excavator machinery on the beach which compacted the coastal dunes, the forestry department’s announcement also failed to address the reasons justifying the burning of the cut trees on the protected site, where even small campfires are prohibited.

Late in January, the European Commission infringement case against Cyprus over the controversial Limni bay project was closed, officially giving the green light for the development after revising the environmental terms of the project and the construction permits in order to incorporate the various mitigation measures, though it is unclear whether this week’s actions by the forestry department abide by the terms of European Commission.

The development foresees the construction of two 18-hole golf courses, two clubhouses, a 160-room luxury hotel, 800 villas and other housing units, leisure facilities, bicycle routes and a museum, to be carried out adjacent to the Natura-2000 protected beaches.

Bach for violin and piano