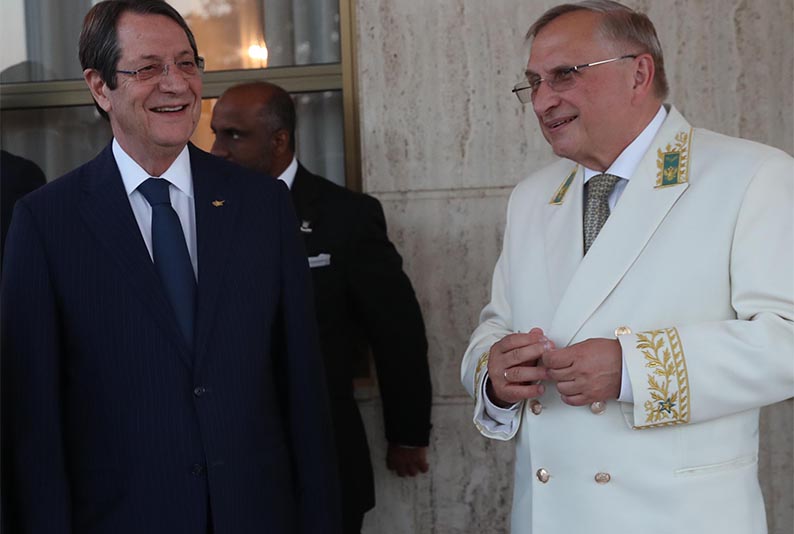 The Republic of Cyprus, as the officially recognised state by the international community, possesses sovereign rights to its Exclusive Economic Zone (EEZ), the Russian ambassador in Nicosia Stanislav Osadchiy has said.

Osadchiy was addressing a reception on Friday night held at the Russian embassy on the occasion of the Russian Federation’s National Day.

The Russian ambassador said his country was closely monitoring the development of energy programmes in the Eastern Mediterranean and its position was that drilling can be performed by any state within its own EEZ in accordance with the norms of international law.

“This is fully applicable to the Republic of Cyprus, which is a state officially recognised by the international community and, in accordance with the international law, possesses sovereign rights to its EEZ,” he said.
Referring to the ties between the two countries, Osadchiy spoke of a steadily developed multifaceted political dialogue between Moscow and Nicosia, the legal basis of which is being strengthened. He said the two countries are major investors in each other’s economies.

Russia, he said, is the second country as per the number of tourists visiting the island and stressed the strong cultural and economic links between the two countries.

To highlight the help Russia had offered Cyprus, the ambassador cited a Russian proverb: “You learn who your true friend is only when you are in need.”

“In times of crisis in Cyprus’ economy, it was Moscow who first gave its shoulder to Nicosia by providing a big loan and later prolonged the terms of its repayment and lowered the interest rate,” he said.
Anastasiades, who attended the event, expressed his government’s sincere appreciation of Russia’s solidarity.

He also conveyed Cyprus’ gratitude for Russia’s “principled position on the Cyprus problem and the long-standing support to reach a viable and functional settlement”.

“We also vastly appreciate your country’s firm support to Unficyp’s mandate and we have no doubt, particularly in view of recent provocations in the area of Deneia, that you will continue advancing the position of neither altering its mandate nor downsizing its personnel,” Anastasiades said.

He said that Cyprus would remain a reliable partner in the two countries’ strong economic and business ties.

“The business community of the Russian Federation, either in Cyprus or abroad, can rest assured that Cyprus will remain a reliable partner and further advance its position as a significant international hub for Russian and Cypriot business and investment synergies,” he said.

Jailed supermarket owner to be released from prison on medical grounds