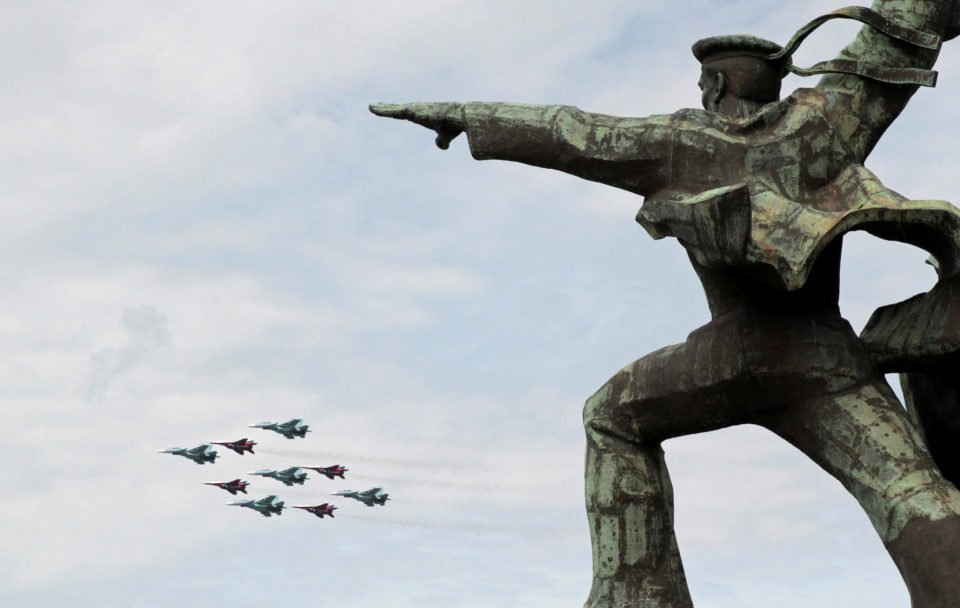 A Russian airforce team putting on a show in front of the Soldier and Sailor monument in Sevastopol, Crimea

Moscow is continuing to pursue its clumsy efforts to prove that Crimea somehow belongs to Russia.

This is despite the EU in general, and all its member states separately (including Cyprus), confirming their non-recognition policy of the Russian Federation’s attempted illegal annexation of Crimea, and urging Russia to release all illegally imprisoned Ukrainian citizens in Crimea and the Russian Federation. They have also censured Russia for its aggressive actions in the Sea of Azov, Black Sea and Kerch Strait.

Now we see a ‘Trojan horse’ policy unfolding, exemplified by trying establishing the “Russian Crimea representation” in Europe through Cyprus. Already five years have passed since Russia launched an open military operation in Ukraine, by occupying Crimea and part of Donbas, while trying to convince the whole world that “black is white”. No civilised society would accept that the violence, by Russia or any other aggressor being used to violate the sovereignty of another state, could be legalised by means of hybrid influence.

Our Cypriot friends are painfully aware of the tactics and methods used by occupation authorities in occupied territory. The most glaring of these methods are the human rights violations – political and religious persecutions – importing settlers to the occupied territory, creating conditions for the forced change of citizenship, the seizure of natural resources and the desecration of cultural heritage.

Today, Russia is once again deploying its ‘Trojan horse’ with the aim of misleading public opinion and avoiding legal responsibility for war crimes against Ukraine. According to various sources, despite the unchanging position of the European Union, Russia will try to open a so-called “Crimean House in the European Union” in Cyprus this month, in an attempt to justify the occupation and annexation of part another state as an “act of historical justice”.

This action is aimed at promoting the idea in Cyprus that the occupied territory of Crimea is the territory of the Russian Federation and also at creating a foothold on the island to “represent interests of the peninsula in humanitarian issues in other countries of the EU”.

Cyprus will never officially approve the opening of such a ‘representation’ in the Republic, and so Russia is resorting to devious methods to achieve its goal. Moscow often relies on the promotion of its specific interests in the EU via Cyprus, by resorting to the religious and cultural ties between the two countries built over the years. Today, by exploiting these ties, Moscow is organising cultural events aimed at furthering its agenda, and presenting them as acts of “goodwill”.

In this case, to get around the Cyprus government objections it is planning to change the name Crimean House in the European Union to the ‘Club of Tauric Chersonese Friends’. Not everybody will realise that ‘Tauric Chersonese’ is a euphemism for the phrase ‘Russian Crimea’.

Of course, we strongly support the development of cultural, humanitarian, ‘people to people’ contacts between Cyprus and other countries. But here there is a hidden agenda, namely an attempt to legitimise the annexation of Crimea by the Russian Federation in the EU. This seems like a well-planned, special operation by Moscow to bypass EU legislation and to achieve its imperial objective. As the phrase goes, ‘if you can’t come through the door, try to pass through the window.’ The opening of the ‘Club of Tauric Chersonese Friends’ will probably enable representatives of the Crimean government to visit Cyprus, to establish contacts with state institutions and business circles of the Republic of Cyprus.

This, according to the authors of this project, will give a possibility if not de jure, but de facto to consider Crimea as an official subject of the Russian Federation and, consequently, to recognise it as the legal part of Russia. It is clear that the Cyprus government will not hold any talks with representatives of the unrecognised Crimea, but Cypriots could meet with the official representative of the Russian noble assembly in the Republic of Cyprus – also the director of the fund of cultural and educational programmes named ‘Cultural heritage of Crimea’ and the initiator of the so-called ‘Club of Tauric Chersonese Friends’ – without suspecting the final goal of scheming Russian ‘chess players’. Another toxic ‘Trojan Horse’?

To illustrate the point, we want to ask the following: What would Greek Cypriots think and react, if under the roof of a Turkish non-government organisation abroad, the ‘historical ties and cultural values’ between the so-called ‘TRNC’ and the state where it is established were to be promoted?.