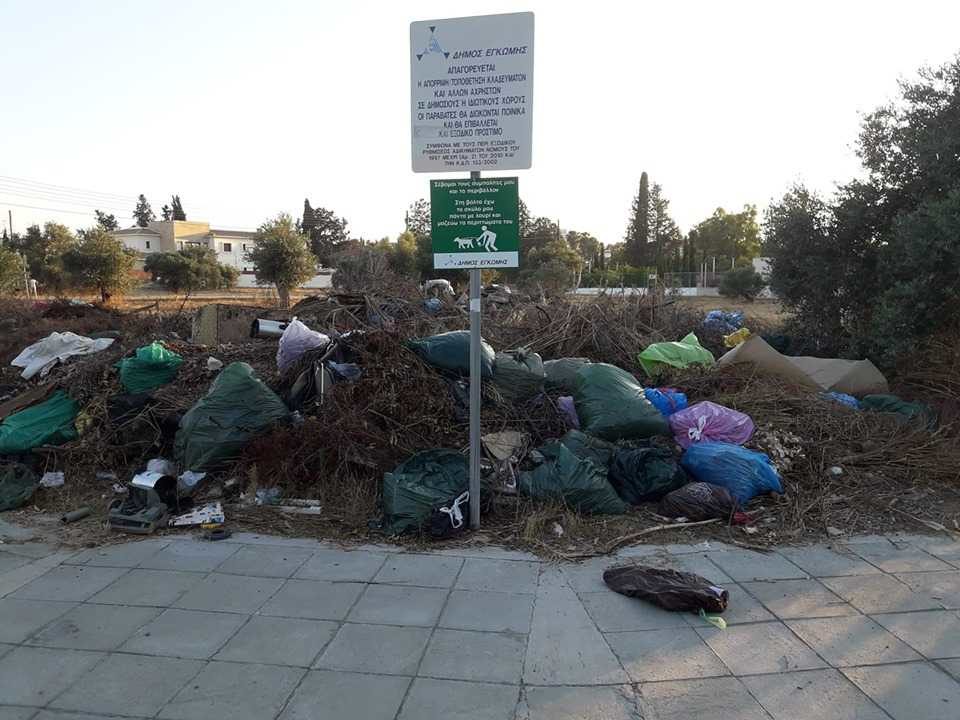 Rubbish is piling up in all neighbourhoods

OWNERS of skip waste containers and the mayors of the greater Nicosia area on Thursday called for solutions to the waste management problem with the former warning that they will go on strike if they are not allocated a collection centre with sensible prices.

The association of licensed skip owners of Nicosia said that an announcement issued by the environment department on Thursday saying that skip operators had broken into the Kotsiatis landfill that is now closed and illegally dumped solid waste there, does not concern any of its members.

The environment department also said that this illegal dumping at Kotsiatis was profiteering since the skip operators have been paid by their customers to properly dispose of the waste at regulated centres and not dump them illegally.

The association of skip owners said the best way to prove this was to check the invoices and way bills for each of the skip loads they carry to licensed units.

“If the service in question believes that they can make statements based on inaccuracies, we have the evidence,” it said.

The association said its members held a protest some ten days ago on the insufficient number of collection centres and the exorbitant prices the state authority has negotiated with a unit in the Nicosia district whose license is pending.

According to the group, the unit in Dali is demanding €150 for the contents of one skip, with the charge to customers rising to between €280 and €290. The Dali unit is also asking for additional fees for bulky items, for example €20 per chair and €30 for a sofa since it claims it must transport them to another unit in Vassiliko, the association said.

At the moment, the standard skip price customers pay is €120, the group said.

Up until the beginning of July, licensed skip owners used to take the waste collected to a processing unit in Mitsero, but after catching fire, the unit lost its license. The Mitsero unit was charging a fraction of what the one in Dali is charging and skip owners were able to keep their prices lower, they said.

Members of the group told the Cyprus Mail that many customers who intended to hire skips, after learning that prices would more than double, changed their mind saying they would not pay that much.

At present, the Dali unit is the only one in Nicosia. There is another one in Limassol and one in Larnaca, which only accepts concrete and glass.

At the moment, the group said, they are forced to keep the waste they collect at their own facilities in anticipation of a solution to the problem of exorbitantly high fees, but this means they are full to the brim.

The group said they are to meet Agriculture and Environment Minister Costas Kadis on Friday to discuss the matter, warning that if they are not offered solutions, they would go on strike on Saturday.

In the meantime, the mayors of the greater Nicosia area also said they want Kadis to take action on waste management issues citing increased cases of fly tipping.

The mayors asked why the unit in Mitsero is not operating again after the fire and also called for more green spots for residents to easily reach, to tackle fly tipping “in empty plots, sidewalks and other open spaces.”

Since the closure of the Kotsiatis landfill, they said, municipalities and communities were left tackle all the waste management problems on their own and at a greater financial cost.

It also costs residents more to have their rubbish collected “and creates small and big ‘Kotsiatis’ landfills everywhere.”

The mayors also called on residents to “finally realise the empty plot next door is not a solution to waste management.”

The landfill at Kotsiatis, but also the one in Vati near Limassol closed down at the end of February as part of Cyprus’ obligation to implement the European directives on waste management.

Nicosia area local authorities that used to pay €8 per tonne at Kotsiatis, must now take the domestic rubbish they collect to the Koshi waste treatment plant in Larnaca that charges €43 per tonne.

They said that as a result, the annual cost of rubbish management this year shot up from €759,000 to €6.7m. Nicosia district residents will see increases on their refuse bills by up to 14 per cent for this year and each of the next two years so that local authorities can recover their losses.