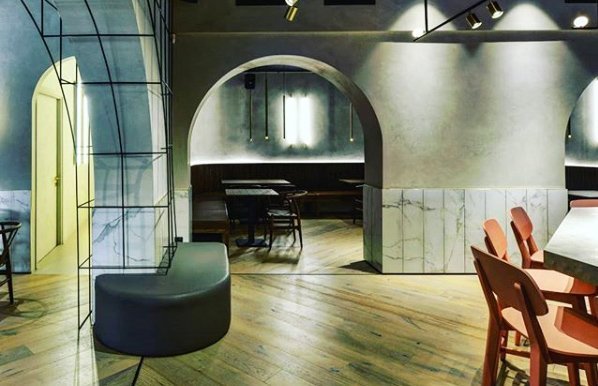 A conundrum: according to the Oxford Shorter, among other things, a puzzling question. What else can we call the current position? We seek a restaurant that has no listing with our telephone register, no recognisable address, other than ‘bottom of the road beside the Cleopatra’. An interesting feature of the area is that it appears to have been visited by a Vogon constructor ship masquerading as a municipal contractor. All road surfaces have been ripped asunder, two metres high portable fences prevent entry by pedestrians and vehicles to all surrounding roads – why? Do we want to discourage visitors, tourists and their business? We should be told.

Climbing over the rubble at the junction with Stasikratous and Prevezis, we spot a recognisable landmark: Valtou Rigani, a popular bistro, allegedly near to the elusive Tocayo and by jingo, there it is. At this time it has the welcoming aspect of a reception centre for battered wives: dark, large black closed doors, and surrounded by debris.

My original enquiry for a booking to the cell-phone of a member of the staff met with the response ‘arrive early’. The municipal ameliorations caused us to arrive later than expected but as there were less than a basketball team inside, we were confident of attaining a table. ‘Sorry, fully booked for next three nights’ – it is Thursday, in the middle of a war zone, and Chris the manager says there is no room at the inn. Ergo Conundrum.

Offering us a stool at the cocktail bar will not satisfy the Italian companion. She wants a table. I point to a table set for two and suggest we will leave before the occupants arrive, Scout’s Honour.

Thus began one of the most interesting dining experiences in Nicosia since I reviewed the great ‘No Reservations’ many years ago. Tocayo is designed by someone who may expect an award; very clean lines, excellent spacing and nothing intrusive, there is an overall shadow of grey. The waiter pours unsought for water, proffers a single page menu, still no sign of any opposition. The carte indicates a preference for the Orient; nothing obvious, except Buddha Salad that contains raw fish, green mango, black sesame, rainbow radish, avocado, edamame beans, ginger and soy sauce. There are three more salads, all worth investigating but I spot the magic word – crab. Crab salad that actually contains white and brown flesh from the crustacean – not the awful crabsticks so popular in Chinese restaurants – with numerous herbs, pickles, mustard seeds, celery, almonds and apple mousse. We shared this and drank a bottle of Zambartas Semillon which enjoined us to devour the delicious prawn dumplings cooked in sepia, served with carrot and ginger puree, coriander and a ponzu (citrus based) sauce; as black as Satan’s riding crop, and quite superb.

The companion surveyed the beef dishes that boasted the best cuts of Angus – even a Tartar with an Asian dressing; a grilled flap-steak with a chimichurri sauce, passed over the raw fish dishes, an interesting Shiitake ravioli, and many more, then settled on the Prawn Risotto, baked in a clay pot, in red pepper puree, herbs, tomato, lime, goats cheese and chili. Another perfect dish.

The witching hour approached, the manager feared for his table, he did not deceive; the place is packed. The glitterati have a new venue; some actually glitter, they wear lamé.

Now we engage with the desserts: they are bewitching and should have a licence. We enjoyed everything they served and so will you. But take a compass and an Ordnance Survey Map.

An excellent evening: Adonis, the chef, is a magician and backed by a group of enthusiastic young cooks that want every dish to be perfect and it damn near is.

Once the war-zone is recovered and the streets open, it will require a much bigger car park to accommodate the faithful.

WHERE Prevezis 10. Beside Cleopatra Hotel, Nicosia