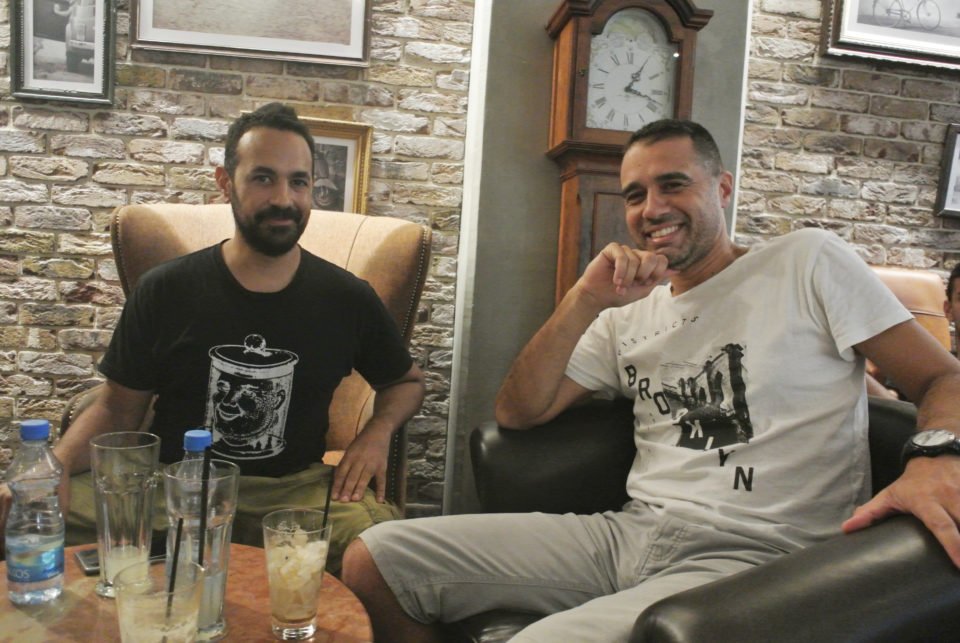 Two local DJs from across the divide have joined forces to scavenge for the forgotten histories of recorded Cypriot music to form an extensive archive, which they plan to share by re-releasing selected tracks in vinyl and digital form.

As is the case with almost every aspect of life and art on the island, the events of the past and our inability to work through them carry lingering consequences. The music that was produced, how much we know about it, and how we remember it, is no exception to this rule.

Constantinos Manglis (DJ Magos), 39, and Cahit Halil (DJ Bombasoul), 43, say they’re almost at the finish line of unburying forgotten tracks produced by local artists dating as far back as the 1960s, having so far dug up around 1,000 records.

The initiative began with Constantinos, a collector at heart.

“I was collecting records during the late 90s while still at school, and was finding some Cypriot records. I then got more seriously into it around seven years ago and found a lot more local stuff, mostly dating back to before 1974.”

Cahit recalled how amazed he was that “someone quite young was collecting this stuff, kind of like a forgotten history.”

The two continue to scour “anywhere and everywhere – people’s houses, word of mouth, antique shops, old warehouses,” Constantinos said, for the remnants of a neglected history, and track down living musicians from both sides in an attempt to cover as big an area as possible.

While for some of these musicians, two men coming out of nowhere to shake up memories of a period before division can be a bitter experience, Constantinos and Cahit said that most were happy to see that the younger generation is interested in what they did when they were teenagers.

The Turkish Cypriot musicians were particularly excited by “a Greek Cypriot who actually knows their music and even goes to the trouble of collecting it. Seeing that was a really positive thing,” Cahit said.

But half a century later, the task can be daunting. Beyond the fact that much of the music played at the time wasn’t recorded – “it wasn’t like it is today when everyone has a laptop and can make a little studio, even finding a guitar was difficult” – the two described how sometimes the musicians won’t have copies of their own stuff, while others won’t remember the names of their band members, and others have forgotten if and what they recorded.

How can we uncover a forgotten history if those who were the main actors themselves have trouble remembering?

“I think the war also affected them quite a lot,” Cahit said. “Speaking to Turkish Cypriot musicians, the war affected them particularly because they had to literally stop recording. Obviously, this is also the case for many Greek Cypriots as well.”

Lots of recordings were also lost or destroyed during the 1960s and the events of 1974, while the disturbances also meant that some recorded music didn’t make it to printing, or musicians with plans to record simply had to cancel, Cahit explained.

And there was music being played everywhere, Constantinos said. “Musicians worked in hotels, restaurants, bars. It was the hustle, a way for them to make money. Today they just get a DJ, or even just prepare a playlist. But then it was more common to have live music everywhere.”

The particular affiliations of the island’s communities with other countries at the time, such as Turkey, Greece and the UK, meant that a Cyprus music archive would need to open the floodgates to music produced by Cypriots abroad.

The same goes for the Greek Cypriot community, Constantinos said. “If someone wanted a career in music, they went to Greece.”

And just when they think they’re close to completing their archive, new discoveries emerge.

“Because of the diaspora element, I keep discovering Cypriot musicians from the US or the UK who are Cypriot,” Constantinos said. “There’s an experimental rock band, Japan, for example. One of the members, the bass player, was a Greek Cypriot. His name is Mick Karn but then you find out it’s not his real name, he’s actually Antonis Michaelides.”

For those who stayed anchored on the island, the local music scene of the 1960s and 1970s – the period Constantinos and Cahit are most interested in – was heavily influenced by what was happening abroad.

Turkish Cypriot music developed a very powerful psychedelic rock sound, influenced by a booming scene in Turkey at the time, while Greek Cypriot musicians had more disparate influences, and tried to copy what was going on in Greece or the UK.

One of the Turkish Cypriot musicians they spoke to, Erdinc Gunduz, for example, would travel with his band, Sila 4, across the Cyprus villages and collect stories and folk songs, which they would transform into folk rock tracks.

“Many people don’t really look in their immediate surroundings and forget about the history on their doorstep,” Cahit said. “it’s easy to shift focus away now that there’s music everywhere.”

As soon as they’re done digging and collecting, the two will have to begin to select which tracks they will re-release, and in a sense, choose what story they’d like to tell with their findings.

While the two await a response from their application for funding, which will serve to speed up their project, Cahit joked that for the time being they’re following “a Cypriot timeline”.

The last of Constantia Summer Cinema