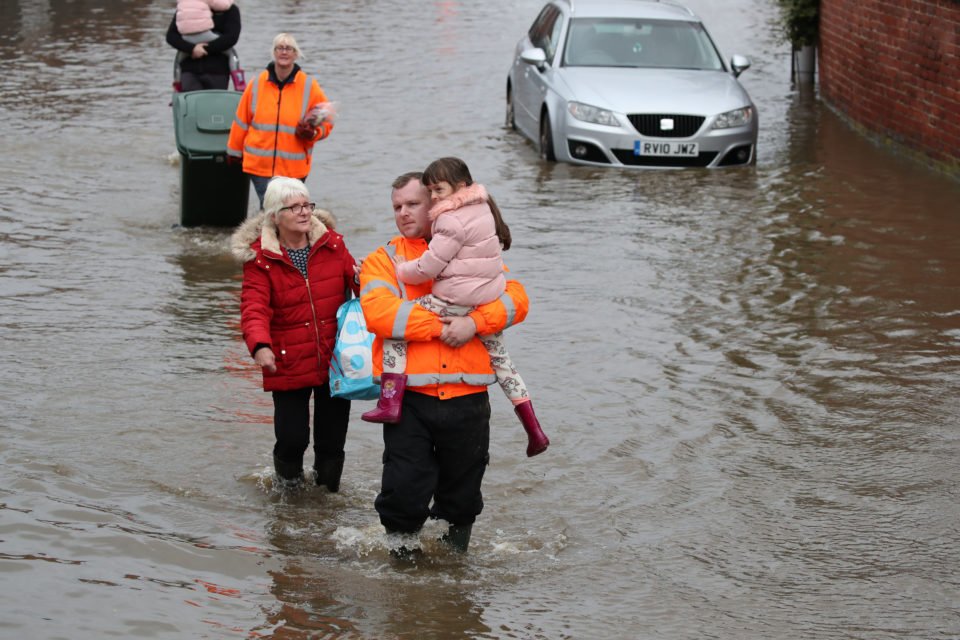 Andrew Hall carries his six year-old daughter Lillie-Mai through floodwater in Doncaster, Yorkshire, as parts of England endured a month's worth of rain in 24 hours

A woman was found dead in flood water on Friday after severe storms brought a month’s rainfall in less than 24 hours to parts of central and northern England.

Police said the woman’s body had been found near a stretch of the River Derwent near the town of Darley Dale in Derbyshire.

“The woman was reported as having been swept away by flood water in Rowsley and the body of what is believed to be the same woman was found in Darley Dale,” police said in a statement.

Residents have been forced from their homes, shoppers sought sanctuary in a shopping centre overnight and travel routes remain majorly disrupted across the north of England as a month’s worth of rain fell in just 24 hours.

Yorkshire and the Midlands were the worst affected areas, with six severe “danger to life” warnings in place following Thursday’s torrential downpour.

Fire crews were called in to help guide people to safety, while rail and road users were warned against travelling on certain routes.

Residents on Yarborough Terrace in Doncaster were having to be rescued from their homes by boats on Friday as waist-high water filled the street.

Police cars surrounded the area as rescue teams put down sandbags in an attempt to calm the situation.

One woman, who has lived in her home on the street for more than 20 years, said the downstairs of her property had filled with water at around 7am on Friday.

“I’ve never known it to be this bad,” she told the PA news agency.

Residents in Toll Bar, near Doncaster, described how the downpour was “almost biblical”, while others made comparisons with deluges which devastated communities in the summer of 2007.

The Environment Agency (EA) reduced its number of flood warnings – meaning flooding is expected – to below the 100 mark by 11am on Friday, with forecasters predicting the worst of the rain had been and gone.

But parts of South Yorkshire remain most at-risk, with six severe warnings around the River Don predicting properties and roads face further flooding.

Toll Bar Post Office worker Kathleen Overton, 61, told the PA news agency: “It was almost biblical, I would say. You were just looking out of your window in disbelief at how much of it was coming down.

“People’s cars were getting submerged in the water, gardens were ruined, you couldn’t drive anywhere. It was carnage.”

Another resident, Roy Kerr, 71, said that without the help of young volunteers who put down sandbags and pumped out water, the situation could have been even worse.

“At times like this you get to see the strength of the community, and I have to praise the boys who were coming outside houses, and pumping the water away into rubbish bins,” he said.

South Yorkshire Fire and Rescue Service said they rescued more than 100 stranded people on Thursday night, with around 500 calls to its control room between 10pm and 4am.

Elsewhere, around 30 people sought refuge in the Meadowhall shopping centre in Sheffield due to gridlocked traffic outside, as the extreme weather conditions meant those turning up for the Christmas lights switch-on were left stranded.

Shopper Saskia Hazelwood, 17, from Doncaster, told PA she and her friends “instantly started panicking” when they saw there was no way of getting home.

She said: “We were provided with free refreshments throughout the night and morning but it was certainly not enough.

“At the start we thought it would be fun, a nice sleepover, something to certainly remember, but after 14 hours of being stranded in Meadowhall we just couldn’t wait to get home, get into our own beds, feel safe again, and catch up on sleep.”

Swineshaw in the Peak District saw 112mm of rainfall during Thursday – the highest total of anywhere across England – while flood-hit parts of Sheffield experienced 85mm during the same period, the Met Office said.

The average monthly rainfall total for Yorkshire for November is 89mm.

Sheffield was particularly badly hit during flooding in summer 2007, which saw millions of pounds spent on prevention schemes.

Yet it again saw dramatic scenes on Thursday, with a number of roads left impassable to traffic, cars stranded in floodwater and gridlock resulting on many routes.

There were more than 30 flood warnings in place for Nottinghamshire, though none were near Sutton-in-Ashfield where the Prime Minister Boris Johnson visited on his campaign trail on Friday.

An additional 35 homes in Mansfield were evacuated as a precaution after a mudslide in the area, while residents in around 25 homes in Worksop were also ordered to flee due to the risk of flooding.

And in Lincolnshire, the River Witham had risen so much residents said they were able to see swans swimming up to the edge of their properties.

Chelsea Foster, 23, told PA: “I didn’t realise how high the water actually was until I went out and there was a group of them (swans) right next to my wall – they were that close I could touch them.”

But forecasters offered some respite.

Alex Burkill, meteorologist with the Met Office, said: “Some places have seen a month’s worth of rain in one day.

“The rain is easing and moving south but obviously the impact of that will continue to be felt.”

Guardiola is the best manager in the world, says Klopp