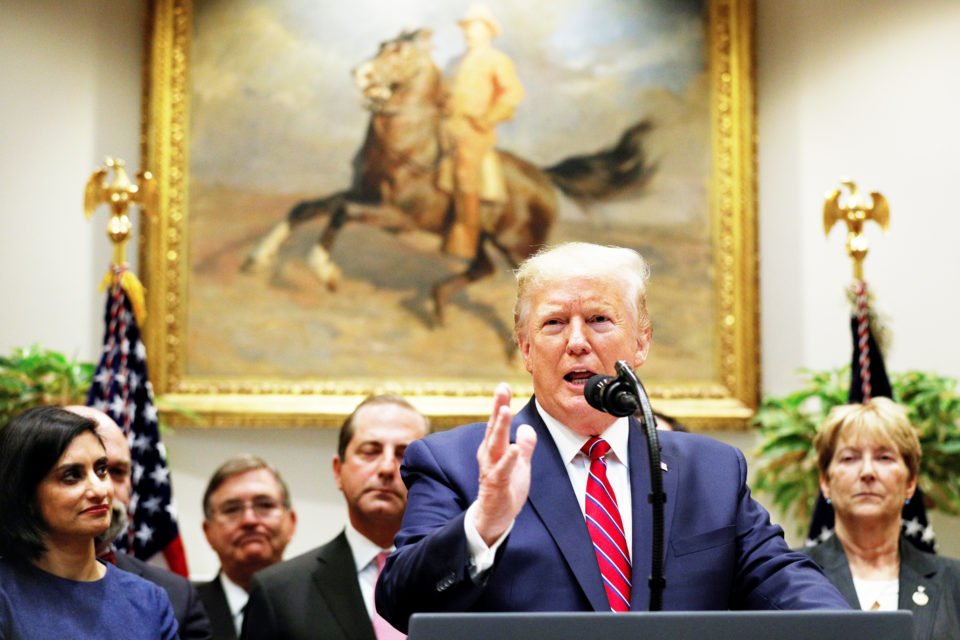 Iran condemned Donald Trump on Sunday as a “terrorist in a suit” after the U.S. president threatened to hit 52 Iranian sites hard if Tehran attacks Americans or U.S. assets in retaliation for the killing of military commander Qassem Soleimani.

“Like ISIS, Like Hitler, Like Genghis! They all hate cultures. Trump is a terrorist in a suit. He will learn history very soon that NOBODY can defeat ‘the Great Iranian Nation & Culture’,” Information and Telecommunications Minister Mohammad Javad Azari-Jahromi tweeted.

Soleimani, Iran’s pre-eminent military commander, was killed on Friday in a U.S. drone strike on his convoy at Baghdad airport, an attack that has taken long-running hostilities between Washington and Tehran into uncharted territory and raised the spectre of wider conflict in the Middle East.

Soleimani was the architect of Tehran’s overseas clandestine and military operations as head of the Revolutionary Guards’ Quds Force.

Giving no indication of seeking to defuse tensions after the strike he ordered, Trump issued a stern threat to the Islamic Republic.

In a series of tweets on Saturday he said Iran “is talking very boldly about targeting certain USA assets” to avenge Soleimani’s death.

Trump said the United States has “targeted 52 Iranian sites” and that some were “at a very high level & important to Iran & the Iranian culture, and those targets, and Iran itself, WILL BE HIT VERY FAST AND VERY HARD.”

He said the 52 targets represented the 52 Americans held hostage in Iran after being seized at the U.S. Embassy in 1979 during the country’s Islamic Revolution.

“In a potential conflict in the future, which I don’t think they (Americans) have the courage to carry out, there it will become clear where the numbers five and two will belong,” he said.

Trump said on Friday Soleimani had been plotting “imminent and sinister” attacks on U.S. diplomats and military personnel. Democratic critics said the Republican president’s action was reckless and risked more bloodshed in a dangerous region.

Thousands of mourners turned out to pay respects to the slain commander on Sunday after Soleimani’s body was returned to Iran, the official IRIB news agency reported.

FEAR OF WAR WITH SUPERPOWER

While many Iranians have rallied in to show grief over the death of Soleimani, regarded as the country’s second most powerful figure after Supreme Leader Ayatollah Ali Khamenei, others worry that his death might push the country to war with a superpower.

Soleimani’s body was flown to the city of Ahvaz in southwest Iran. IRIB posted a video clip of a casket wrapped in an Iranian flag being unloaded from a plane as a military band played.

Thousands of mourners dressed in black marched through the streets of Ahvaz beating their chests in live footage aired on state TV.

British foreign minister Dominic Raab said on Sunday he had spoken to Iraq’s prime minister and president to urge efforts to relieve tensions in the region following the U.S. strike.

Raab, who described Soleimani as a “regional menace” and said he was sympathetic to the situation the United States found itself in, said he also planned to speak to Iran’s foreign minister.

“There is a route through which allows Iran to come in from out of the international cold,” he told Sky News. “We need to contain the nefarious actions of Iran but we also need to de-escalate and stabilise the situation.”

Iraq’s parliament was set to convene an extraordinary session on Sunday where lawmakers told Reuters they would push for a vote on a resolution requiring the government to request the withdrawal of U.S. troops from Iraq.

“There is no need for the presence of American forces after defeating Daesh (Islamic State),” said Ammar al-Shibli, a Shi’ite lawmaker and member of parliament’s legal committee.

Despite decades of enmity between Iran and the United States, Iran-backed militia and U.S. troops fought side by side during Iraq’s 2014-2017 war against Islamic State militants.

Around 5,000 U.S. troops remain in Iraq, most of them in an advisory capacity.

The militia were incorporated into government forces under the umbrella of the Popular Mobilisation Forces which Muhandis led.

Many Iraqis, including opponents of Soleimani, have expressed anger at Washington for killing the two men on Iraqi soil and possibly dragging their country into another conflict.

On Saturday evening, a rocket fell inside Baghdad’s heavily-fortified Green Zone near the U.S. embassy, another hit the nearby Jadriya neighbourhood and two more were fired at the Balad air base north of the city. No one was killed, the Iraqi military said.

The U.S. strike followed a spike in U.S.-Iranian hostilities in Iraq since last week when pro-Iranian militias attacked the U.S. embassy in Baghdad after a deadly U.S. air raid on Kataib Hezbollah, a militia founded by Muhandis. Washington accused the group of an attack on an Iraqi military base that killed an American contractor.

British foreign minister urges Cyprus to ‘do the right thing’