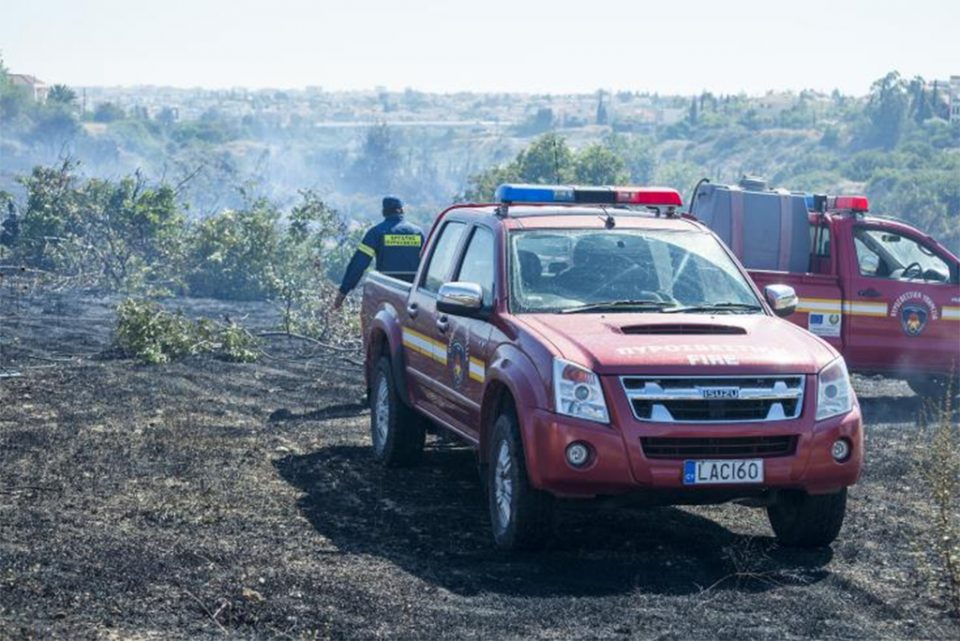 With strong winds, Sunday was a disastrous day for the island in terms of fires with firemen called to 26 fires from 6am until 6pm, while seven fires also caused much damage in the north.

“It was one of the worst days so far,” spokesman for the forestry department Andreas Christou said. “There were strong winds throughout the island, and taking into account the six or seven days of severe drought we had before that means all vegetation was extremely dry and very flammable.”

Fortunately, he added, all capacities, ground forces and aircraft were ready and responded quickly.

“There were fires all day, starting from the morning.”

The first fire of the day broke out in Ergates around 7.40am and was brought under control at 8.23am. It started from dry grass and spread to a building.

The second one started at 8.20am near Oroklini, and the swift intervention by the department and the fire service prevented it from taking hold. Three fire engines and eight firemen were deployed.

A third fire broke out at 9am near Moni. It was also quickly extinguished by five men and two vehicles of the forestry department.

At 10.38am, a fire burning three hectares of dry vegetation and hay bales started on the road from Liopetri to Avgorou. Three fire trucks were needed to extinguish it after it raged for more than two hours. Ten agricultural tractors also helped.

Yet another fire broke out in Louvara in Limassol at 11.30, which was brought under control three hours later after burning five acres of wild vegetation, pine trees and agricultural land.

At 1.10pm the fire service was informed of another fire, in the Achna forest. It started in the north and spread to the buffer zone where members of the British bases tried without success to contain it. About five hectares of forests in the government controlled areas was destroyed. The fire reportedly burned down farms and a wide area of shrubbery.

Just 30 minutes later, a fire in Xylofagou started to spread. A plane and helicopter were used to extinguish the flames. The British bases, the forestry department and civil defence also worked to put it out.

At 2pm, the fire brigade was notified that a fire was burning wild vegetation and olive trees near Lapatsa. Seven fire trucks, an aircraft and two vehicles from the game fund were used to bring the fire under control by 4.30pm. It burned an area of about 10 hectares.

According to the fire service, a fire broke out in Ypsonas at 4.45pm. It burned a total area of about one hectare. It was just the first of three in the area within minutes. A new blaze started at 5.15pm north of Ypsonas, and yet another one west of the village.

The fire in Diorios is the second one in recent days and was considered to be out of control as it quickly spread due to the strong winds. This prompted Turkish Cypriot leader Mustafa Akinci to request help with aircraft from President Anastasiades in a telephone conversation.

However, before the aircraft could be deployed it was deemed by the north it could be contained and the government was informed the aircraft assistance was not needed.

The media reported the fire was brought under control with a large number of ground forces, fire engines, the army and residents of the area.