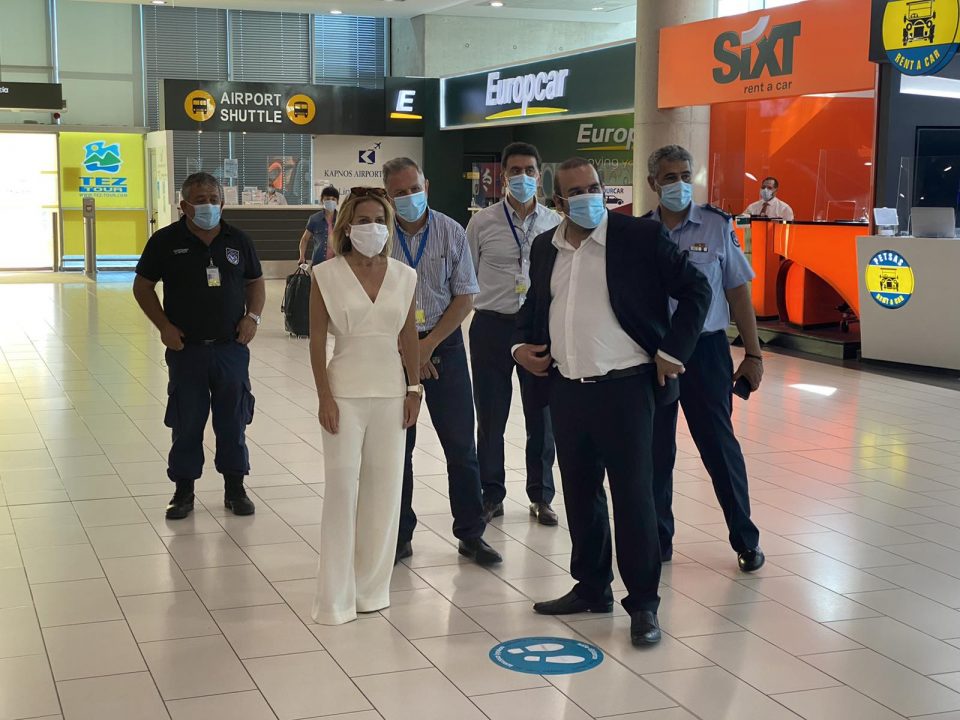 LONG-AWAITED flights from the UK are set to resume today with arrivals at both at Larnaca and Paphos airports as Britain’s move to a category B country becomes official, though it comes at a time when cases are on the rise on the island after weeks of negligible numbers and zero hospitalisations or deaths from Covid-19.

Transport Minister Yiannis Karousos paid a surprise visit to Larnaca airport on evening with Justice Minister Emily Yiolitis to determine whether protocols were being observed. “We want to send the message that checks will continue and will be intensified,” he said. Karousos said an increase in passenger traffic was expected due to the change in category for the UK. He said random tests would be increased from 600 to 1,000.
But although the island’s airports are ready, it is still unclear how many people will come from the UK.

A member of Paphos airport staff confirmed to the Cyprus Mail on Friday, that in total 17 arrivals are expected on Saturday and there will be 16 departures. They include the first flights of holidaymakers from the UK since travel restrictions were lifted, most of which are ‘turnaround’ flights.

“TUI and Jet2 have cancelled their flights for now until mid-August, and we have no indication as yet about passenger numbers arriving this weekend, we usually get sent a load message with total numbers when the flights leaves the departure airport,” he said.

Most of these flights are with carrier Ryanair, although one is a British Airways ‘turnaround’ flight from London Heathrow, the first for the airline since travel restrictions, due to the coronavirus pandemic, were put in place.

UK arrivals and departures include: Bournemouth, London Stansted, and an Easyjet flight from London Gatwick.

“We direct any calls from passengers requesting information about permitted entry into Cyprus to the official FlightPass site of the government, as all of the information is constantly updated on there. Things change so fast and it would not be good if we inadvertently misdirected someone,” another worker at Paphos airport said.

Holidaymakers and non-permanent residents must have evidence of a PCR test dated not more than 72 hours old before being allowed to enter the country. NHS tests are allowed with specific details.

All passengers, regardless of the category of the country they are arriving from, are required to apply for CyprusFlightPass (https://cyprusflightpass.gov.cy/) within 24 hours of their departure. They must fill out the form online and present it before boarding the aircraft and upon their arrival in Cyprus.

Everyone arriving and departing is also required to pass through a thermal camera which detects temperature levels, they are manned and operated by members of the health authority, the staff member said.

“If anyone shows a high temperature, the health authority will carry out further checks and also, if they don’t have the correct paperwork, immigration will deal with the matter in line with the government guidelines and protocols.”

He added that so far, a number of people arriving without tests were permitted to take a Covid-19 test at the airport, however, this would not apply to British holidaymakers.

“They must come with the correct paperwork and a negative test. It would be wrong not too and taking a big risk.”

And if car hire numbers are any indication as to passenger numbers from Britain, it’s not looking encouraging.

Petsas car hire, one of the oldest on the island, in operation since 1962, it also has a base at Paphos airport arrivals hall. They told the Cyprus Mail that they have no bookings at all from the UK.

They are usually fully booked at this time of year.

“We don’t have any pre-booked cars for the weekend or next week from the UK, which is usually our biggest market and we would usually have all of our vehicles out at this time of year, “

Our View: Papadopoulos needs to accept responsibility for mess Diko is in