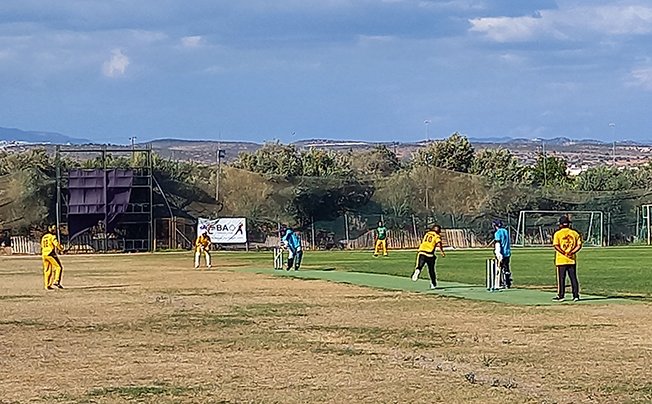 The afternoon game was a close encounter between Fellows and Limassol Bangladeshis, which Fellows won by eight runs

Only two second division matches were possible in the CCA #BAOFinancial Autumn T20 League on Sunday, and Black Caps took full advantage to cement a place in the semi-final stage, just one win away from securing promotion to division one.

Black Caps, a new team in the competition this season, built a challenging score of 187 for 6 against Amdocs in the morning Group A game at Ypsonas. In-form openers Bikram (16) and Waqas (47) put together a 69 run partnership before Hitesh removed them both in the 8th over.

Captain Rajwinder Brar (52) then took charge, guiding his team to a match-winning total with the help of Pawan (39).

In reply, Amdocs proceeded steadily with a 50 partnership between Preetaj (20) and Akash (46), and Hitesh (39) added some quick runs to the total, but it was not enough as Amdocs closed their innings 26 runs short on 161-8.

The afternoon game was a close encounter between Fellows and Limassol Bangladeshis. Fellows’ 8-run victory put them on top of group B, waiting anxiously on the outcome of their rivals’ matches.

Batting first, Fellows were struggling at 38-4 in the 8th over. Christos Markides top scored with a vital knock of 30. Al Amin (19) and Mike Kyriacou (17) were the other two batsmen to reach double figures as Fellows were bowled out for 112.

In reply Limassol Bangladeshis lost 3 early wickets before the middle order, led by Alamgir (38) and Rayan (20), made a good recovery.

With 45 needed in the last 8 overs and 7 wickets in hand, the Bangladeshis were in a good position to register their first win. However, some poor choice of strokes and clever bowling from Fellows led to them failing to reach their target, as they finished their 20 overs on 104 for 8.

The day’s other fixtures were due to be played at Happy Valley but had to be postponed due to extra precautions against the coronavirus. Re-arranged dates will be published on the Cyprus Cricket website once the duration of the new restrictions is known.

Division 1 of the league has barely started, but the current standings in Division 2 are: