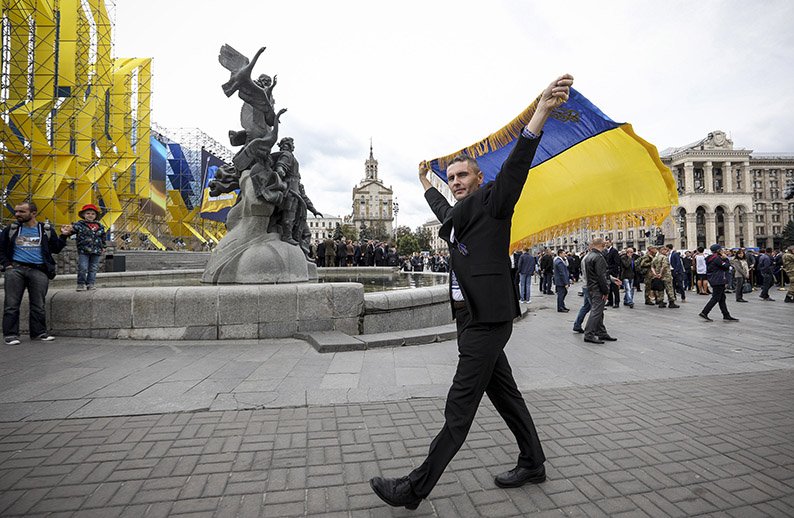 IN 2017, Ukraine has continued to implement structural reforms, generating positive trends in the economic and social sphere despite internal and external challenges. The illegal annexation of Crimea and Sevastopol by the Russian Federation and the conflict in the east of the country provoked by Russia’s destabilising actions have continued to pose significant challenges to Ukraine’s reform process from a political and economic perspective, in addition to causing significant human suffering. Ukraine has continued actively to seek peaceful legal and political solutions in this area.

Considerable legislative reforms have taken place in the fight against corruption and new specialised anti-corruption institutions have been set up in Ukraine. Work on implementation of anti-corruption efforts continued over the past year, while further substantial work is still outstanding. Some of the new Ukrainian agencies already participate actively in the fight against corruption, while others remain to be fully operationalised. Ensuring sustainable and tangible changes in the governance system to eliminate corruption opportunities and ensure proper prosecution and punishment for corruption-related crimes remains one of the key challenges Ukraine faces in its reform process hindering the improvement of the business and investment climate.

With full entry into force of the Association Agreement and introduction of visa-free travel, Ukraine and the European Union had reached qualitatively new ambitious level. A new political and contractual reality establishes proper conditions for elaboration of a new forward-looking strategic agenda, which will foster further transformations in Ukraine towards the best European standards and practices.

The Bulgarian presidency of the EU Council as an EU Member State from the Central-Eastern Europe and the Black Sea region has a unique opportunity and advantage to bring new impetus to the developments in the region. With a view towards the Bulgarian presidency being a success story, Ukraine has elaborated short-term priorities of its relations with the EU. We rely on Bulgarian leadership in the EU Council and EU member-states, including the Republic of Cyprus, to facilitate their effective implementation.

Particularly, we urgently need further international support for Ukraine in the context of ongoing Russian aggression. This kind of support could be provided by upholding EU’s personal and economic sanctions against Russia until full restoration of sovereignty and territorial integrity of Ukraine, regularly updating the sanctions list of persons and entities responsible for the violation of territorial integrity and sovereignty of Ukraine over Crimea, preventing bypassing of the restrictive measures by the EU economic operators, as well as illegal visits to the occupied territories of Crimea and Sevastopol by EU citizens, organisations and companies, blocking any attempts of Russia to legitimize the occupation of Crimea and city of Sevastopol in the framework of international agreements and launching the UN peacekeeping operation in the occupied territories in the Donbas in accordance with the UN peacekeeping principles in coordination and by agreement with Ukraine, and pressing Russia to release immediately Ukrainian political prisoners and hostages while establishing an international Group of Friends of Ukraine for de-occupation of Crimea and at the same time intensifying efforts to counter Russian propaganda.

In the field of trade and economy Ukraine needs much support in implementation of DCFTA commitments between Ukraine and the EU,  establishment of new financial instruments to enhance AA/DCFTA implementation and to boost domestic and foreign investments to Ukraine, continuation of EU-Ukraine High Level Industrial Dialogue in order to accelerate approximation of EU rules for industrial technical regulations and standards, with the view to forge closer links between European and Ukrainian industrial sectors, promoting Ukraine’s participation in the EU Digital Single Market, establishment of export promotion agency, Support Ukraine-EU dialogue on accelerated liberalisation of trade in services in the DCFTA framework, focusing on a several priority sectors.

We need further financial assistance as well, particularly by ensuring due level of Ukraine’s participation in the EU’s initiative on the External Investment Plan aimed at providing assistance to the EU Neighbourhood, revising the EIB External Lending Mandate for Ukraine including for rehabilitation of Donbas and with regard to lending to sub-sovereign borrowers, ensuring EU’s financial and humanitarian assistance to the population in the Donbas, and supporting establishment of a European Investment Plan for Ukraine based on the best practices of multi-donor instruments. The investors/donors’ international conference for Ukraine in Brussels in 2018 will be a great support to this end.

Despite the continuing conflict in its East, Ukraine has demonstrated unprecedented levels of resilience and persistence in achieving societal change, asserting its European orientation. Expectations regarding the EU remain high. Civil society continues to play a pivotal role in the country’s reform progress, counterbalancing strong vested interests still represented in parliament and among institutions and authorities. With the entry into force of the AA/DCFTA and visa liberalisation, EU-Ukraine relations have never been so intense. In order to attract the investment necessary for sustainable economic development and for an improvement in standards of living across the country, including for the most vulnerable segments of the population, the authorities are being urged by civil society and international partners to redouble their efforts in the pursuit of meaningful reform, intensifying in particular the fight against corruption at all levels. The EU is consolidating its political, technical and financial support, with clear conditionality.

In 2018, Ukraine will continue to undertake political and economic reforms in numerous key sectors, in the context of its political association and economic integration with the EU. It will also continue to address significant macroeconomic imbalances. Through policy dialogue and financial assistance the EU, during the Bulgarian presidency of the EU Council, in collaboration with international partners, has to proceed with supporting measures aiming at improved governance, the fight against corruption, judiciary reform, public administration reform and decentralisation. And without any doubt, continuous emphasis has to be placed on support for the implementation of the Association Agreement.

Borys Humeniuk is the Ambassador of Ukraine to Cyprus

Our View: All the work done to put public finances on healthy footing is being undone

A landmark opportunity for peace, stability and prosperity

The cult of woke