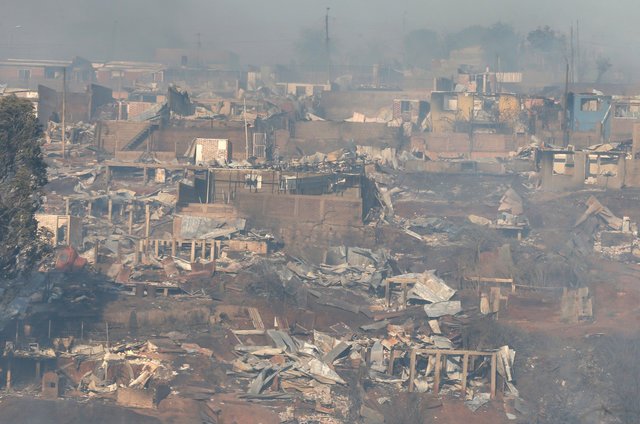 A large fire broke out in the coastal Chilean city of Valparaiso on Monday evening, burning at least 100 homes, prompting the evacuation of about 400 people and sending plumes of smoke high into the air.

Chilean Interior Minister Mahmud Aleuy said in televised remarks that 19 people had been slightly injured and a total of 500 homes were at risk. Power was initially cut to about 47,000 customers in the region, but had been restored to all but 350, he said.

Almost 50 fire brigades from Valparaiso and neighboring municipalities were deployed to fight the blaze, and investigators had been sent in to determine the cause of the fire which started in a fishermen’s club, according to the government.

Images on social media showed huge brown-gray columns of smoke emanating from a neighborhood high in one of the city’s hills, and pouring into the sky out over the Pacific Ocean.

Authorities said the blaze was fanned by gusty winds and high temperatures. Poor sanitation was also to blame as the fire fed on trash deposited in small ravines that run throughout Valparaiso.

“We don’t have any way to prevent people from throwing trash into Valparaiso’s gullies,” Aleuy said.

“We insist that it’s not just the civil system that has to do preventative work. People have to do it too.”

A drought in central Chile caused a record number of forest fires in the area last year, wreaking havoc on Chile’s key forestry industry and forcing evacuations in recent weeks near the capital, Santiago, about 60 miles (100 km) southeast of Valparaiso.

A scenic, but gritty port city of 285,000, Valparaiso is the center of a metropolitan area of about 1 million, the second largest urban district in Chile.

Built on steep hillsides in an area covered in pines, many of the city’s wooden structures are susceptible to fire, especially in the poorer neighborhoods higher in the hills.

In 2014, a significantly larger fire killed 13 people and burned 2,000 homes. Many smaller fires have since hit Valparaiso, stirring debates as to how to better plan development in the city.

“It can’t always be the most outcast parts of Valparaiso that deal with these fires,” the city’s mayor, Jorge Sharp, said in televised remarks. “I ask that the state come up with an overall plan to deal with these kinds of situations.”

In first, Trump dons masks in visit to a military medical facility