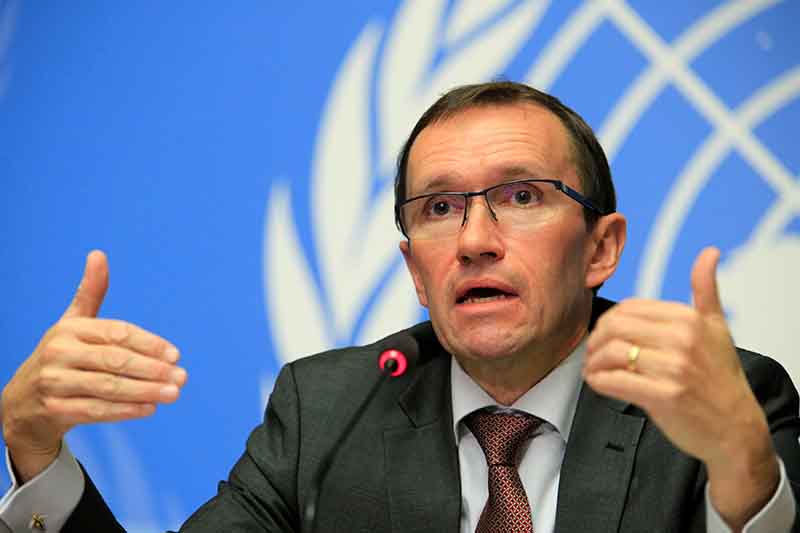 The UN Secretary General’s special adviser on Cyprus Espen Barth Eide arrives in Ankara on Monday for meetings with Turkish officials over the next two days, UN spokesman Aleem Siddique said on Monday.

According to the Cyprus News Agency, Siddique said Eide will meet officials at the Turkish Foreign Ministry. He also said that Eide may meet with others as his schedule has not yet been finalised.

On Friday, Eide was in Athens for a meeting with Greek Foreign Minister Nikos Kotzias, after which he said they had the “opportunity to go through in detail some of the ideas we are developing on how to think about a new security framework for Cyprus, one which can be accepted and supported both by the Greek-Cypriot and Turkish-Cypriot communities but also by the guarantor powers, so that they can be part of the necessary change from what we have today to what we will have tomorrow.”

Eide said he was encouraged, “particularly by the second session of the conference on Cyprus, which happened at level of deputies at Mont Pelerin a few weeks ago, and which showed that there was a certain space for further discussions which we are elaborating in this particular visit.”

He also commented on “some complicated tensions in the relationship between Turkey and Greece” at the present time, noting that this was “a background setting that I would rather be without” but which should not be allowed to negatively affect the talks.

President Nicos Anastasiades and Turkish Cypriot leader Mustafa Akinci, who had a meeting on February 1 as part of ongoing UN-led talks on the Cyprus problem, requested the United Nations on Wednesday to prepare, in consultation with the guarantor powers, for the continuation of the Conference on Cyprus at political level in early March.

They also decided that they will meet weekly through the month of February to address outstanding issues and that their negotiators will also continue their regular meetings. The leaders’ next meeting is scheduled for Thursday, while the negotiators of the two sides, Andreas Mavroyiannis and Ozdil Nami, will meet on Tuesday.

The Conference on Cyprus convened on January 12 in Geneva, under the auspices of the UN Secretary General Antonio Guterres, with the participation of Anastasiades and Akinci, the Foreign Ministers of Greece, Turkey and the United Kingdom as guarantor powers, and in the presence of the European Union as an observer, to address the issue of security and guarantees, a crucial chapter in discussions for a Cyprus settlement.

The conference decided to establish a working group at the level of deputies to identify specific questions and the instruments needed to address them, and that the conference will continue at political level immediately thereafter to review the outcome of the working group’s discussions.

In parallel, according to the decision, the negotiations on outstanding issues in the other chapters will continue between the two sides in Cyprus.

The working group of deputies met in Mont-Pelerin, Switzerland, on January 18 and 19, and according to Eide “successfully completed the mandate entrusted to it by the conference”.