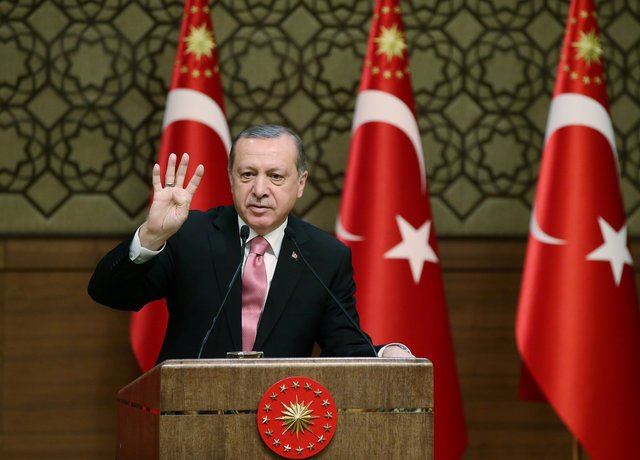 Turkish President Tayyip Erdogan makes a speech during his meeting with mukhtars at the Presidential Palace in Ankara, Turkey, February 8, 2017

Turkish President Tayyip Erdogan has approved a constitutional reform bill that would vastly strengthen the powers of his office and a referendum on the issue is likely on April 16, officials said on Friday.

Erdogan’s supporters see the plans to replace Turkey’s parliamentary democracy with an all-powerful presidency as a guarantee of stability at a time of turmoil. Opponents fear a lurch towards authoritarianism in a country which has seen tens of thousands of people, from journalists to military, detained since a failed coup last July.

A brief statement on the presidency web site said the bill – which would enable the president to issue decrees, declare emergency rule, appoint ministers and top state officials and dissolve parliament – had been sent to the prime minister’s office to be published and submitted to a referendum.

“With the president’s approval, eyes are now on the YSK (High Election Board). The YSK will probably announce that April 16 is the appropriate date for a referendum,” Deputy Prime Minister Numan Kurtulmus told reporters.

Erdogan says the reform will prevent a return to the fragile parliamentary coalitions of the past and is needed at a time when Turkey faces unprecedented security threats, from a series of Islamic State and Kurdish militant bombings to the failed coup.

Turkey is set for a divisive campaign, with the reforms needing only a simple majority to win passage. The President and his officials dominate broadcasting and opponents complain they are unable to make their voices heard effectively.

Erdogan, who first assumed power as prime minister in 2003, says those who vote against the change would be providing encouragement to militant groups seeking to divide the nation.

Even before official campaigning begins, he and government officials have used televised speeches at everything from hospital openings to joint press conferences with visiting heads of state in recent weeks to lobby for a “yes” vote.

The two main opposition parties say the proposals would strip away balances to the already considerable influence Erdogan wields over government.

The uncertainty has worried investors, already unnerved by a slowing economy, tumbling lira, and a deteriorating security environment. Ratings agency S&P cited concern about the executive presidency, which it said could limit parliamentary and judicial oversight, when it lowered its outlook for Turkey to “negative” from “stable” last month.

Erdogan assumed the presidency, a largely ceremonial position, in 2014 after over a decade as prime minister. Since then, pushing his powers to the limit, he has continued to dominate politics by dint of his personal popularity.

Parliament approved the reform bill last month with more than the minimum 330 votes in the 550-seat assembly. If the legislation is approved in the April referendum, it could pave the way for Erdogan to remain in office until 2029.