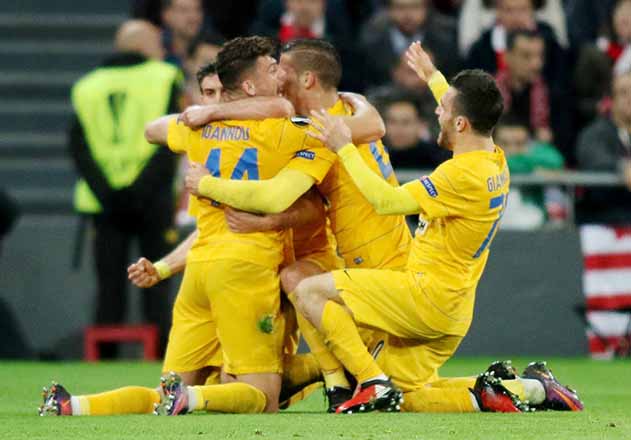 Apoel hold high hopes of a historic qualification to the last 16 of the Europa League when they host Athletic Bilbao on Thursday thanks to Giannis Gianniotas’ late goal in last week’s first leg in Spain, coupled with key absentees for the visitors.

The Cyprus champions’ superb European run looked to be coming to an end last week as the free-flowing Basques laid siege to Boy Waterman’s goal.

Yet Gianniotas’ last-minute strike to reduce the deficit to 3-2 leaves the Cypriots needing a narrow win to go through with those crucial away goals in hand.

Apoel boss Thomas Christiansen has no fresh injury concerns ahead of the crunch encounter, and his side go into the game in high spirits following Monday night’s 3-0 win over second-placed AEL, moving them six points clear at the top of the table.

The same cannot be said about Ernesto Valverde’s men, who are travelling to Cyprus without two of their most important players and on the back of a poor result.

Centre-back Aymeric Laporte has been ruled out through injury, as has talisman Aritz Aduriz, who netted in the first leg and is the tournament’s leading scorer with seven goals.

The latter’s injury was suffered in the Basque side’s disappointing 2-0 defeat at La Liga strugglers Valencia, which leaves them four points off the European places.

The man whose goal has boosted Apoel’s hopes spoke to Sport24 Radio 103.3 about the upcoming game, where he is hopeful his side can secure a “miracle” passage to the next round.

Gianniotas insists that Athletic “were the favourites to begin with and remain so,” but says he and his team-mates “gave a good account of ourselves at San Mames and the result gives us a chance”.

The Greek international continued: “We managed to score two away goals which was something special for us, at a very tough ground, where many big teams have competed without being able to win. If we remain disciplined then we have a chance to pull off the miracle and go through to the next round”.

Despite Bilbao’s many injury worries, one of those who is expected to shake off his knock and start Thursday’s game is Mikel Balenziaga, who feels his team have to be on their toes from the off.

“We have to go into the game strong from the first minute and get into our own rhythm,” before noting that “a heated atmosphere awaits us”.

Valverde’s last visit to the island was during his time as manager of Olympiacos, when his side were thrashed 3-0 by Anorthosis in a Champions League qualifier en route to the Famagusta club becoming the first ever Cypriot side to reach the group stages of European competition.

Apoel have only ever played two European knockout ties, back in their 2011/12 Champions League run to the quarter-finals. They defeated Lyon 1-0 in the last 16 at the GSP before going through on penalties, though they were halted by Real Madrid in the next round.

Their home record in this year’s competition provides reason to be confident, with three wins out of three, against Astana (2-1), Young Boys (1-0) and Olympiacos (2-0), all scorelines which would see them through on Thursday.

The match, which kicks off at 8pm Cyprus time, is expected to feature a near full capacity crowd for what has all the ingredients to be another famous European night at the GSP Stadium.