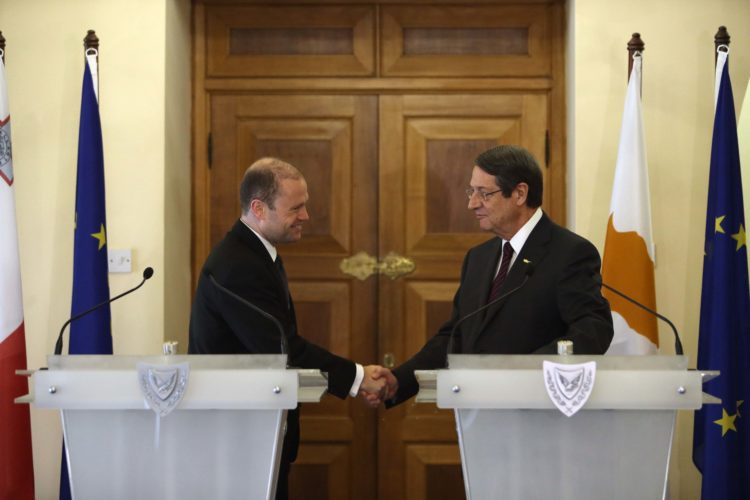 The Prime Minister of Malta Joseph Muscat on Thursday expressed support for efforts to give the new generation of Cypriots a land that is free of foreign military presence.

He was speaking after official talks at the presidential palace with President Nicos Anastasiades and delegations from both countries.

Anastasiades described the current phase of the negotiations for a Cyprus settlement as a critical juncture, noting that challenges need to be surpassed so as to move forward in the talks after 22 months of intensive and painstaking negotiations.

He described as “regrettable” the developments, which saw the Turkish Cypriot side leave the negotiating table at a crucial moment when the key chapters of security and guarantees were expected to be discussed.

In his speech, Muscat said: “I am proud I come from a country where people of my age and generation only have faint memories of having foreign military presence on their land. And I do understand, believe and support the aspiration of your country to give the next generation of Cypriots a similar experience, that of having one’s own will decided by one’s own people.”

Muscat, whose country currently holds the rotating European presidency, said they will do whatever they can to support the talks “and to make an appeal for all parts to engage and to come around the table to rekindle the optimism that there was at the start of this year and I do hope that time will give good counsel and will prove that this is something that can really happen and is within grasp.”

Anastasiades said the “progress achieved during the last 22 months of intensive and painstaking negotiations, the pending issues that persist on significant issues, and the challenges that need to be surpassed so as to move forward”.

He expressed gratitude for the support of the Maltese Presidency and the European Union in the efforts to find a solution that will reunify the Republic of Cyprus, safeguarding the fundamental freedoms and human rights of all its citizens, fully in line with EU law, values and principles.

The president reiterated that it was “unthinkable that an EU member state should have military presence and guarantees by a third country, particularly in today’s current international environment and in a neighbourhood of extreme volatility.”

Anastasiades pledged firm commitment and readiness to “immediately resume the dialogue, and continue discussions where they were left off, on all six chapters”.

The Greek Cypriots, he added, expected “the Turkish Cypriot side and Turkey as well, to constructively and tangibly contribute to the negotiations, an obligation it has also assumed in the context of its EU accession negotiations”.

The most expensive m² of prime property in the world