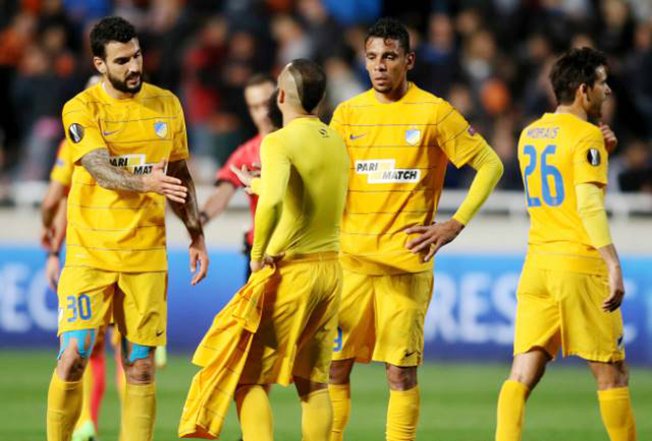 Apoel face a tough task in the second leg of their Europa League last-16 tie against Anderlecht on Thursday, as they look to overturn the 1-0 loss suffered a week ago against the Belgians in Nicosia.

The Cyprus champions have surpassed all expectations in this year’s campaign so far, storming through the group stages and knocking out Athletic Bilbao in the last-32, but last Thursday’s timid performance at home leaves them with their biggest challenge so far.

On the other hand, Nuno Morais is ruled out due to an accumulation of yellow cards. The club captain’s absence will mark the end of his incredible run of 71 straight matches for Apoel in Europe, stretching back to the start of the 2010/11 season in a Europa League playoff against Getafe.

It could be an even bigger blow to the visitors’ chances if Morais’ long-standing midfield partner Vinicius fails to recover from his injury problem that kept him out of the first leg, as well as the recent league match against Anorthosis.

Speaking to the press shortly before boarding the Brussels-bound plane, Apoel press officer Nektarios Petevinos focused on the team’s need to dig deep right until the last second of the tie.

“We are called to perform another turnaround which seems impossible for our standards. We have nothing to lose and the most important thing for a team is to believe. We are going to fight until the end.”

Manager Thomas Christiansen admits “it will certainly be difficult after a negative result” in the first leg.

Nevertheless, Christiansen remains adamant that his side will do all they can to overturn the deficit: “We came here to turn things around and to show that we can do it”.

Against Athletic, Apoel created few chances and made them count, something Christiansen is hoping to see again: “We must be more efficient (in front of goal)”.

Anderlecht ended their domestic regular season with a comfortable 3-0 victory over Waasland-Beveren to enter the playoffs as league leaders.

However, the man whose goal last week separates the two sides, striker Nicolae Stanciu, was keen to bring the attention back to European matters before getting carried away with the league.

“We have a lot of confidence for the playoffs, but we mainly have to recover well for our European game against Apoel on Thursday night. After that match, we can focus on the playoffs,” said the Romanian.

Anderlecht manager Rene Weiler is confident that, with his fully-fit squad, his side can get to the quarter-finals and beyond.
“We will try to get the win. Everyone is in good health and on form,” said the Swiss coach. “If we manage to get through, anything is possible.”

As far as the form guide goes, the odds are stacked against Apoel. They have only ever won one away match in Europe beyond qualifying rounds, which came against Olympiacos in this season’s group stages, and have lost eight of their last nine on the road in the competition.

In the Europa League, excluding qualifiers, Anderlecht have won five out of their last seven home matches, which have included victories over Tottenham Hotspur, Mainz and Zenit St. Petersburg.

Mourinho hits back at Pogba critics