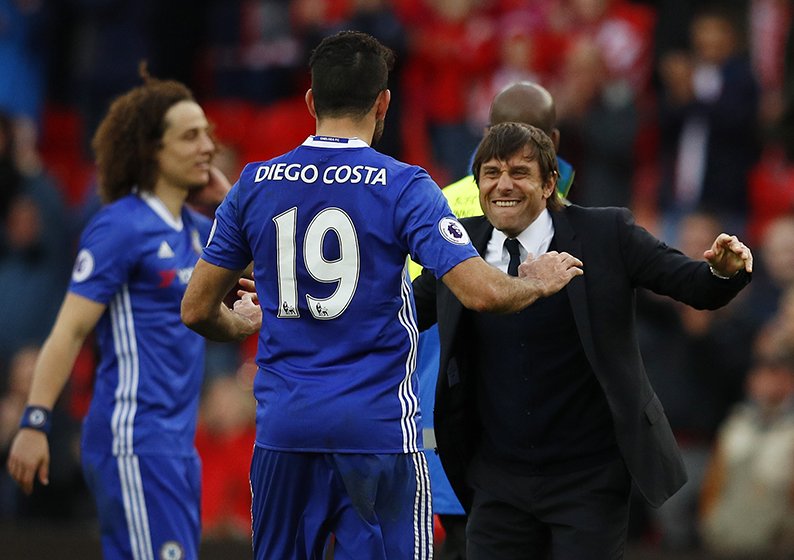 Chelsea continued their seemingly irresistible surge towards regaining the Premier League title as a late Gary Cahill goal saw them eke out a 2-1 win at Stoke City and move 13 points clear of their pursuers on Saturday.

The latest triumph for Antonio Conte’s unstoppable charges came after London rivals Arsenal’s season continued to unravel with a third straight 3-1 away league defeat, this time at West Bromwich Albion.

The Gunners’ fourth loss in five league games raised further questions about the future of under-pressure manager Arsene Wenger, who announced intriguingly afterwards: “I know what I will do. You will soon know”.

Conte had been without the in-form Eden Hazard through injury for what always promised to be an awkward fixture for Chelsea at Stoke and, just as they had recently held Manchester City at home, the Potters again made life difficult.

Willian put the leaders ahead after 13 minutes thanks to a blunder by Stoke goalkeeper Lee Grant but Jon Walters equalised with a penalty before halftime after being fouled by Cahill.

The England defender made amends in the 87th minute with a deserved winner and, after Phil Bardsley had been sent off for Stoke in added time, Conte celebrated with his staff on the touchline as Chelsea moved on to 69 points, leaving all the pressure on their nearest pursuers who play on Sunday.

Second-placed Tottenham Hotspur, who host Southampton, and third-placed Manchester City, who welcome fourth-placed Liverpool to the Etihad Stadium, now both have to win to get back within 10 points of the leaders.

Arsenal’s defeat came amid more protests from some of the more vociferous of the Gunners’ faithful about Wenger as the manager acknowledged that his side were in the middle of “a unique bad patch” in his two-decade managerial reign.

After dismal defending saw West Brom’s Craig Dawson head home twice from corners in a convincing win for Tony Pulis’s men, Wenger told reporters: “We lose game after game at the moment and that for me is much more important than my future.”

Yet as the debates about his prospects became ever louder — one airplane trailed a banner over the ground that declared “Wenger Out” while another trumpeted “In Arsene We Trust” — the Frenchman said he would clarify his future soon.

His team, though, now look in serious jeopardy of not enjoying a 20th successive season of Champions League football in 2017-18 — and if Manchester United win at Middlesbrough on Sunday, Arsenal, currently fifth on 50 points, will drop to sixth, two points behind Jose Mourinho’s men.

Basement club Sunderland were held 0-0 at home to poor travellers Burnley, while third-bottom Hull City were trounced 4-0 by Everton, for whom league-leading scorer Romelu Lukaku scored twice in added time, taking his season’s tally to 21.

The Belgian became the first Toffees’ striker to hit 20 league goals in a season, since Gary Lineker 31 years ago, though his goals were bitter-sweet for Everton fans who know he could leave after this week rejecting a new contract offer.

The champions won 3-2 at West Ham United with first-half goals from Riyad Mahrez, Robert Huth and Jamie Vardy for their first league success away from home all season.

Like Leicester, Crystal Palace eased their worries with a third straight win, 1-0 at home to Watford thanks to Troy Deeney’s own goal, suggesting master escapologist Sam Allardyce can maintain his record of never suffering a Premier League relegation.

Three days to get inked