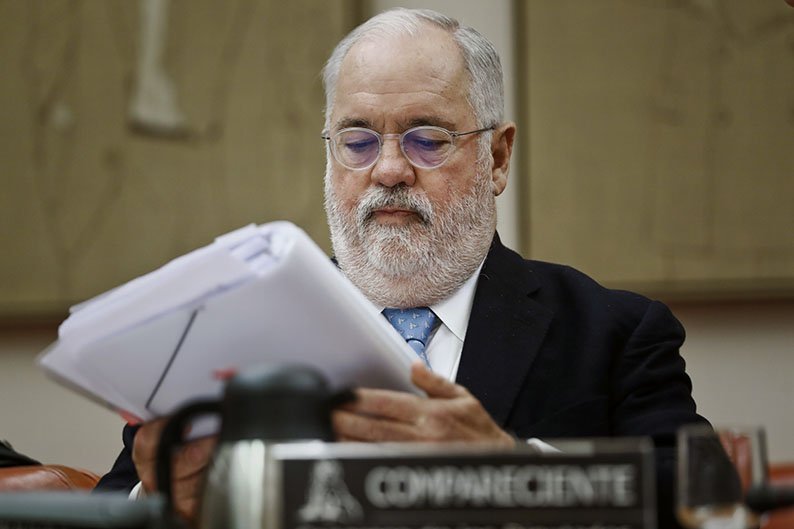 Cyprus, together with Israel, Greece and Italy lent their support on Monday to pressing on with the proposed East Med pipeline taking Israeli and Cypriot gas reserves to mainland Europe.

In Tel Aviv, the respective energy ministers of the four countries signed a joint declaration, committing to support the application for obtaining EU funding for the project under the Connecting European Facility programme.

The parties also pledged to enhance their cooperation by forming a quadrilateral working group “with the aim to monitor and support the development of the East Med and to identify terms of a necessary intergovernmental agreement to expedite project realisation”.

On Tuesday, hosts Israel will give a presentation of the project to visiting EU officials.

“This is an ambitious project which as the Commission we clearly support, as it will have a high value in terms of security of supply and diversification targets,” European Climate and Energy Commissioner Miguel Arias Canete said on Monday.

Canete added he believed the project will “meet all relevant requirements” to make financial commitment possible.

In his own comments, energy minister Giorgos Lakkotrypis said that Cyprus, as a transit point for gas but also a future producer, will continue supporting feasible export options, such as the East Med project and a direct subsea pipeline from Cyprus’ exclusive economic zone (EEZ) to Egypt.

Yuval Steinitz, Israel’s energy minister, said the concerned parties have set a target of 2025 for completion of the project.

Neighbouring Israel, mulling its gas export options, has been in talks with Ankara for a pipeline running from the massive Leviathan prospect to the southern shores of Turkey. The pipeline would have to cross through Cyprus’ EEZ.

At the same time, Cyprus, Israel, Greece and Italy have been discussing a subsea pipeline bringing eastern Mediterranean gas to the European mainland. An initial survey estimated the cost of the undersea segment of a pipeline with an annual capacity of 12-16 billion cubic metres (bcm) at $5.7 billion.

Asked about Israel’s plans, Steinitz was categorical on Monday that his country would move forward with both pipelines.

For his part, Elio Ruggeri, CEO of the IGI Poseidon joint venture promoting the East Med option, said a final investment decision for the project was expected by 2020.

According to Ruggeri, the segment of the pipeline from the eastern Mediterranean to Greek shores is estimated to cost some €5 billion, plus another €6 billion for the segment linking Greece to Italy.

The energy ministers of the four countries said they would be meeting again in Cyprus in six months’ time.

As Globes points out, the high cost of the gas at the reception point in Europe remains problematic for the East Med pipeline. The cost is estimated to be at least $7 per heating unit, $2.50 more than the price of Russian gas.

Similarly tricky are the logistics, as the undersea route will reach a depth of 3.3 kilometres, and would further have to contend with volcanic activity on the seabed between Cyprus and Greece.

According to Globes, the four-way meeting in Israel this week is also taking place against the backdrop of the European Commission withdrawing its opposition to the construction of two additional gas pipelines for transporting gas from Russia to Europe.

The European Commission decided not to block two more pipelines in the Baltic Sea between Russia and Germany with an annual capacity of 55 bcm, at an estimated construction cost of €9.9 billion. The project, called Nord Stream 2, is strongly opposed by Poland, Ukraine and the Baltic Republics.

Also in Israel on an official visit is government spokesman Nicos Christodoulides. He is scheduled to hold meetings with the country’s defence and energy ministers, as well as with Prime Minister Benjamin Netanyahu’s chief of staff.

Meanwhile in Nicosia on Wednesday the government will be signing a contract with Exxon Mobil granting the latter an exploration concession over offshore Block 10.

Attending the signing ceremony – in what is perhaps an unusual gesture – will be Robin Dunnigan, US deputy assistant secretary for energy diplomacy at the State Department’s Bureau of Energy Resources.

Later in the week, ink will be put on paper for the contracts awarding exploration concessions to a partnership of ENI and Total for Block 6, and to ENI for Block 8.

One-sixth of properties are not registered