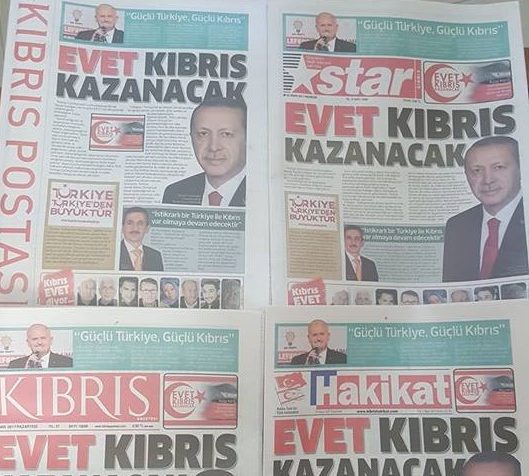 Four daily newspapers in the north, including Kibris, which has the highest circulation, came out on Monday carrying identical advertorials on Turkey’s upcoming referendum on their front page paid for by ruling AK party.

Kibris, Kibris Postasi, Star Kibris, and Hakikat, all had identical front pages with the same headline “Yes, Cyprus will win,” same design, and survey with the same people.

Kibris Postasi, is owned by businessman Polat Alper, and Hakikat, is the mouthpiece of Rebirth Party (YDP), established by Turkish immigrants who generally appeal to the Turkish population in the north.

The papers were heavily criticised on social media by ordinary people and politicians.

The chairman of People’s Party (HP) Kudret Ozersay said: “We have seen all sorts of advertisements but making the logo which is the reflection of institutional identity a part of the advertisement is not understandable. If you cannot draw a line at some point based on ethical norms, no one knows where this will lead to.”

Political group “It’s not Ankara, it’s Lefkosa” issued a statement with the headline saying “Day of Shame for the press: The pool media spread to the north of the Cyprus”. The group said the papers that published AKP’s propaganda were acting like its election bureau.

On the other hand, Dayanisma (Solidarity), an NGO, issued a statement appealing to the public to boycott the papers indefinitely.

While Turkish Cypriots voiced their criticism on the social media, some mocking the papers for “selling their souls”, a Turkish Cypriot journalist who asked to stay anonymous said he felt ashamed for working for a media boss who put money in front of everything else.

Title race back on after AEK beat Apoel, Omonia succumb to Apollon