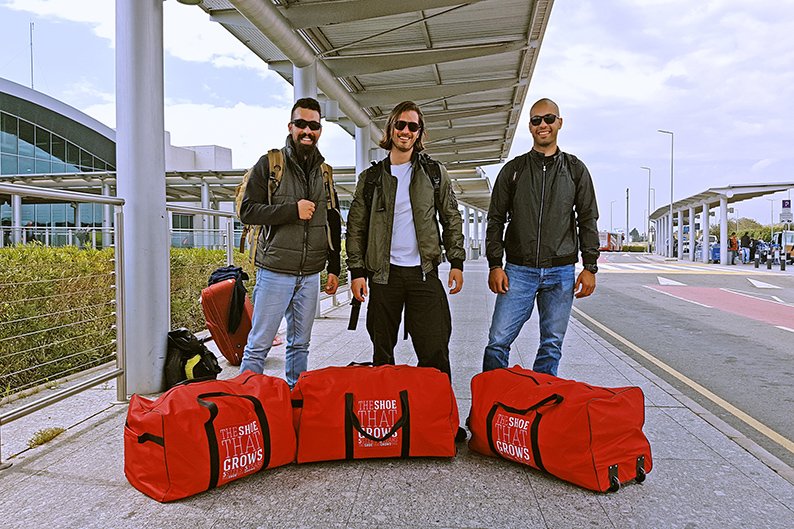 The team at Larnaca airport (CNA)

While the island is preparing to celebrate Easter three Cypriots are on the way to Nepal to donate shoes and clothing to poor children and Buddhist monks.

Socrates Rossides, 31, and brothers Nicolas and Constantinos Nicolaou, 29 and 25, will travel to Nepal’s mountain village on motorcycles for 15 days to deliver 160 pairs of shoes, 320 shirts and 160 monk’s robes to locals in remote and inaccessible areas of the country.

In doing this they will cover a distance of more than 1,000 kilometres, but there is more to the trip. As Rossides said the “purpose of the group is not only to deliver shoes and clothing, but to sensitise the world and to show that rather than to visit a country as a tourist, it is better to get involved with volunteering and experience closely the culture and the problems.”

The three left Cyprus by plane on Friday morning with Kathmandu, Nepal’s capital, as their destination.

Before boarding, Socrates Rossides, team leader and founder of the newly founded non-profit organisation ‘Rhea Foundation’ talked about the background of the trip and his expectations.

He said he began volunteering with the United Nations five years ago in Nepal as a teacher of English. Last year he decided to make a tour of Tanzania by motorcycle, delivering special shoes that can grow five sizes called ‘The shoes that grow’.  The shoes are available in two sizes, 32-37 and 37-42, are made of strong materials like leather and rubber and don’t have parts that break easily.

At the instigation of the United Nations Rossides formed the ‘Rhea Foundation’ and together with the Nicolaou brothers planned the latest journey for which they prepared for three months. The preparations included physical exercise, medical examinations, vaccinations and the study of Nepalese culture and customs.

“We also do it as a mental test, because while in Cyprus the world will celebrate with families of Easter, we’ll do something different, but we know at the same time that when we return, we will feel richer than the day we left,” the 31-year-old lawyer said. “We see will poverty, hunger and misery but will gain more as people when we comprehend the quality of life we have here in Cyprus.”

The three Cypriots will record details of their journey daily on cameras which they took with them and everyone can follow their progress on the foundation’s Facebook page. A website (www.rhea- foundation.com) is currently under construction.

This is only the beginning for the foundation, Rossides explained. The team will continue to collect contributions for the ‘shoes that grow’. Other goals are to create a playground and football pitch for a school in Africa and to raise money to build a school in a Tanzanian village.